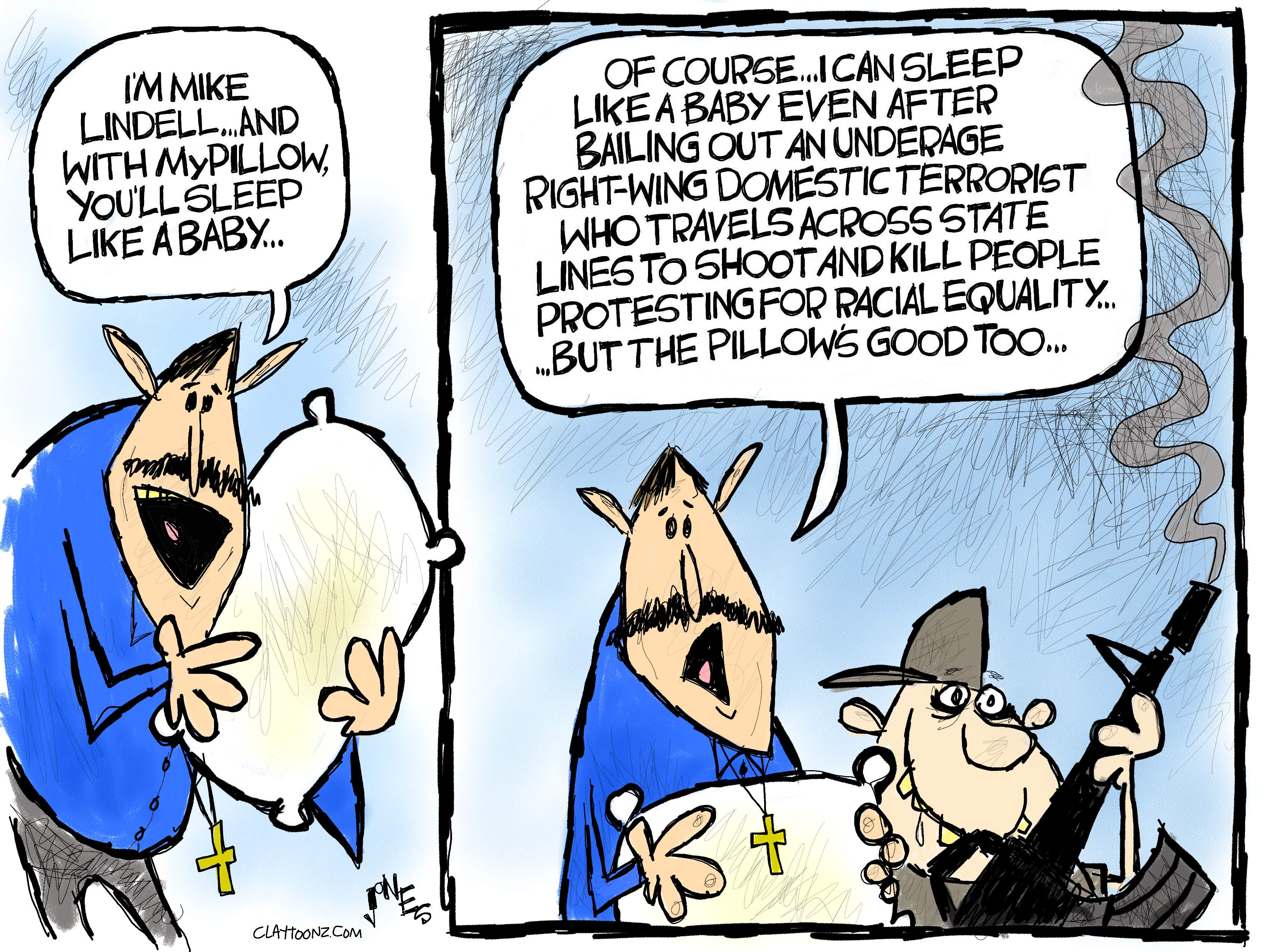 Remember when that underage terrorist twerp Kyle Rittenhouse went across state lines to shoot at people protesting for racial justice in Kenosha, Wisconsin and ended up killing two of them? He just made bail. You may be asking yourself, “How did an unemployed 16-year-old right-wing militia wannabe terrorist come up with $2 million for bail?”. You can thank the MyPillow guy and actor Ricky Schroder.

Rittenhouse’s lawyer tweeted, “KYLE RITTENHOUSE IS OUT OF JAIL! God bless ALL who donated to help #FightBack raise required $2M cash bail. Special thanks to Actor Ricky Schroder @rickyshroder1 & Mike Lindell @realMikeLindell for putting us over the top. Kyle is SAFE. Thanks to ALL who helped this boy.”

I know all this time you’ve been as concerned as I have about the safety of Kyle Motherfucking Rittenhouse. Oh, I hope jail treated him nicely. I hope the food wasn’t too horrible. I’m sure the pillow wasn’t as comfy as an $80 MyPillow…or from what I’ve gathered from online reviews…maybe it was.

Anyway, this underage terrorist who somehow illegally gained access to an assault rifle and killed people is out on bail and the child actor to thank, or blame, isn’t Chachi. Whaaaaaaaaaaaaaaaaaaaaaa’at? Scott Baio’s stupid racist ass didn’t do it? Of course not. Chachi doesn’t have money. Have you seen him in anything lately? Fact: Scott Baio has had three sitcoms and I never watched one episode. I did watch Happy Days but that wasn’t HIS sitcom. And I know what you’re thinking. Scott Baio has had THREE sitcoms? I mean, he’s had as many TV shows as Matt LeBlanc who as far as I can tell, is NOT a Nazi.

In case you’re concerned that Ricky Schroder has gone over to the dark side…he only confirmed the information on…wait for it…Parler, the brand new online social media destination for racists and Qanon fucknuts claiming they’re leaving Facebook and Twitter because their conspiracy theories are being censored. Perhaps acting on Silver Spoons as a child left a permanent soft spot in Ricky for billionaire assholes. So what’s the MyPillow guy’s excuse? He’s a racist billionaire asshole. That’s not fair. Maybe he’s just a millionaire.

I’m very supportive of Mike Lindell’s recovery from crack, but I think he’s still an addict. He’s addicted to orange Kool-Aid and like Chachi and Silver Spoons bastard who was in The Champ with MAGAt Jon Voight (I spent some time on Wikipedia this morning), he’s a cultist. And when Mike Lindell’s not pushing pillows full of bullshit, he’s pushing bullshit cures for the coronavirus. Lindell pushes treatment for Covid-19 that’s so stupid, only Ben Carson tries it.

People who go out and point guns at protesters are championed by Trump and his MAGAts. Case in point: Those scummy lawyers in St. Louis who were so threatened by Black Lives Matter protesters walking down their street, that that they interrupted margarita time to point guns at them…were championed at the Republican National Convention.

Make no mistake about it. Trump and MAGAts aren’t celebrating rich-asshole lawyers for wearing shirts with mustard stains. It’s the pointing guns at black people they like. Trump and Republicans encourage white domestic terrorism. Kyle Rittenhouse gained an automatic weapon illegally and crossed state lines to kill two people…and you haven’t heard one word from the president (sic) of the United States disavowing that. Donald Trump has actually argued that Rittenhouse was practicing self defense when he crossed state lines to kill people. I’m sure Ben Carson bought that bullshit.

Republicans argue that people should take up automatic weapons and defend their homes from black people walking in front of it, but Rittenhouse wasn’t even in his own state, less enough his “home.”

Kyle Rittenhouse, who was too young to possess an automatic weapon, took an automatic weapon across state lines, joined militia goobers in parading around Kenosha pretending to defend businesses, where not one person stopped to say, “Hey…is that kid old enough to be stomping around here with an automatic weapon?”. Instead, cops gave him bottles of water. Instead, after shooting people and walking toward police cars with his hands up, the cops drove past him. No worried that kid with a smoking automatic weapon…he’s white.

In contrast, cops shot Jacob Blake in the back four times (they shot seven times but missed with three of them), paralyzing him…after tasing him…twice. Oh yeah. Jacob Blake is black.

The shooting of Jacob Blake is what the protests were over in Kenosha. Estimates put the property damage at around…wait for it…$2 million. MyPillow and Silver Spoons could have helped the community out more by donating to rebuild it instead of giving that money to a domestic Trumper terrorist. But no. They would rather make a martyr out of a killer.

I think giving money to a terrorist fuck like Kyle Rittenhouse, who’s probably going to be found guilty of murder by a jury, is almost as much of a waste as spending $80 on a shitty pillow.

Either way, it’ll probably be hard to sleep at nights.