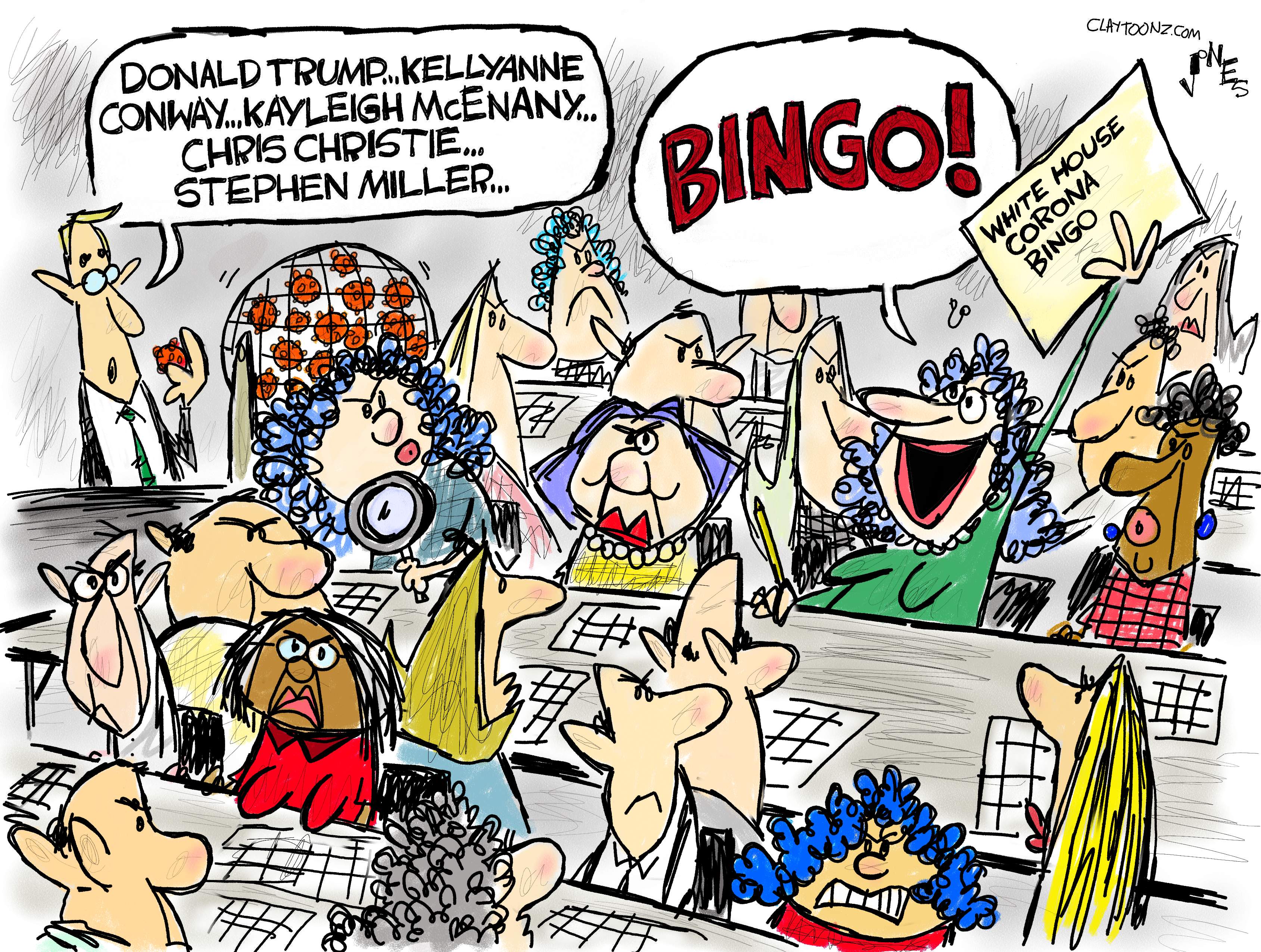 Donald Trump, Melania Trump, Kellyanne Conway, Chris Christie, Kayleigh McEnany, Stephen Miller, Thom Tillis, Mike Lee, Ron Johnson, Hope Hicks, Nicholas Luna, Chad Gilmartin, Karoline Leavitt, Bill Stepien, and Ronna McDaniel (who even had “rona” in her name) are all people working in the White House, or close to it, who have tested positive for the coronavirus… so far.

There are nations that aren’t having as many outbreaks a day as this White House has had.

Many of these people have worked overtime to downplay the virus and deny it was as bad as it is. They worked hard to mislead the public. They over-exerted themselves to lie to America. And if they didn’t do that, then they worked for an administration that did. They are complicit.

Let’s not say any of them deserve it, but they each truly did ask for it.

A few months ago, Kellyanne Conway demanded a reporter to produce the name of a White House staffer who claimed people in the administration were calling it the “China Virus.” She said it was a racist term and nobody in that White House would ever use such an ugly description. Scratch that. Soon, Donald Trump was calling it the “China Virus” and Kellyanne, when asked to denounce that, said, “Look over there! It’s an aardvark!” And while the reporters were looking, she took off.

But many people who have caught the virus from the Trump team that downplayed it and refused to exercise the safety guidelines from their own Coronavirus Task Force, did not ask for it. A lot of people did not ask for mouth breathers to breathe on them.

While Kellyanne asked for it, her daughter didn’t. It was bad enough that Kellyanne Conway spent the past four years talking about “alternative facts” and lying for a corrupt administration. But who knew she was this vile? She refused to practice safety so she could stay in line and pander to a stupid and hateful president. She exposed herself to catch the coronavirus. Now, her lying and pandering to the worst president in world history has threatened the lives of her children. Her 15-year-old daughter, TikTok sensation Claudia, has now caught it.

In a video, Claudia claimed her mother lied to her about testing negative. Then she posted a new video saying she “guessed” she had misinterpreted her mom and that Kellyanne said she tested three times, twice positive, and never lied about it. The best thing about this is, she was taping a new TikTok video with her mom in the room who said, “You lied about your fucking mother…about covid.”

I was wrong. The best part about that is at the end her sentence, Kellyanne asked, “You’re taping again…”

Isn’t it delicious irony that Kellyanne is upset her daughter “lied” about covid? If only Kellyanne could hold her boss, the president (sic) of the United States, to the same standards and accountability as she holds her 15-year-old daughter.

Kellyanne also left her position at the White House to spend more time breathing on her family.

Others who did not ask for the virus from the White House are the three journalists who Kayleigh McEnany helped catch it.

This White House refused to create a safe environment for its employees. They carried out rallies. They even carried out huge, mask-less events on the White House lawn which is believed to have been the spark for this latest outbreak. After sharing it with the world, this administration refused to contact those in danger. They even tried to hide the outbreak.

The administration didn’t want to alert the press that Hope Hicks had acquired it. Would they have still hidden it after Trump tested positive? How would they have explained all the people working from home? What would they have said after journalists covering the White House started catching it?

Now, White House adviser and hate speech writer Stephen Miller has caught it. He was in that group with Hope Hicks that leaped into Marine One with Donald Trump last Wednesday. Another in that group was Jared Kushner.

If you had Stephen Miller on your bingo card, congratulations. Now, all with Jared are keeping an eye on him.

I’m sorry. Is it too soon to mock these people for catching a deadly virus? Not if issuing a commemorative coin celebrating Donald Trump defeating the virus, before he’s defeated the virus, isn’t too soon.

But hey, if you are one of those White House employees who have caught the virus because of Donald Trump’s failures, don’t worry. According to Donald Trump, it’s no worse than the flu. It’s not that bad. You can’t let it “dominate your life.”

In fact, you’re probably a winner. I mean, Donald Trump isn’t a loser, right? It’s not like everything he touches turns to shit, right? And he touched you, right?

Creative note: Laura, one of my cartoon proofers, deserves a shout-out for this. While proofing, she asked if the bingo balls were supposed to look like the coronavirus. They weren’t but I thought it was an excellent idea. Thanks, Laura.