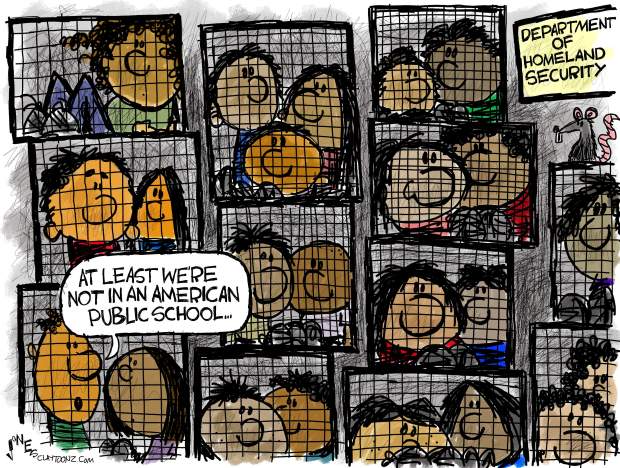 You know that famous quotation written by Martin Niemöller, a German who initially welcomed Adolph Hitler and the Third Reich…then turned against it when he realized what was coming. His quotation goes:

“First they came for the socialists and I did not speak out because I was not a socialist.

“Then they came for the Jews, and I did not speak out—because I was not a Jew.

“Then they came for me—and there was no one left to speak for me.”

If you did not speak out when the Trump administration started separating families as a policy of cruelty to deter illegal immigration, except to say, “yay,” shame on you. You assumed that a cruel and heartless administration would only stick to their racist agenda and it wouldn’t affect you negatively because you look like them?

Yes, Donald Trump is a racist who is supported by fellow racists and others for whom racism is not a dealbreaker. But in addition to being racist and heartless, they’re selfish and greedy. This is when they come for you. And they’re coming for you and you don’t even know.

Donald Trump will force your children to go back to public schools before we’re ready for schools to open. If you honestly believe you can make elementary school children practice social distancing, then you have never met a child in your entire life. You probably don’t even remember when you were a child. Let me remind you in case you forgot; you were sneezy, snotty, and sticky. You were gross. The only way you can force kids to practice social distancing would be to place them all in cages. Let’s not give the Trump administration any ideas. Betsy DeVos doesn’t care for your children any more than Stephen Miller cares about brown ones.

Donald Trump doesn’t want schools to reopen because we’re ready or it’s best for the community you’re in. And you’re a special kind of stupid if you believe he actually cares for your children. The only reason Donald Trump wants the schools to reopen is so people can feel like things are going back to normal. It’s another way to practice denial about the extent of the coronavirus pandemic. It’s a distraction to help reelect Donald Trump.

Benito Mussolino wasn’t just a fascist dictator. He was a total failure as a leader. He couldn’t employ his people, he couldn’t create jobs, he couldn’t stimulate his economy, and he couldn’t build a great military. His constituency would say, “At least he has the trains running on time.” Il Douchey can’t even do that. Donald Trump’s trains are public schools and Confederate statues.

The worst part of this might be the “new normal” makes the type of cruelty of sacrificing your children for Trump’s personal interest acceptable. Like violence on television, we’ve become desensitized to Donald Trump’s stupidity and cruelty. For example, did you know they’re still separating families? Did you think it quietly disappeared like the coronavirus was supposed to do last April? It didn’t.

There are still families being separated. There are still children alone, in cages, wondering where their parents are. There are still cases over this in courts. We just moved on from one outrage to another. Our focus shifts from whatever brand new cruel insanity Donald Trump is breaking out today.

You’re late to the game, but you better start speaking out now. The question is: Will there be anyone left to speak for you?