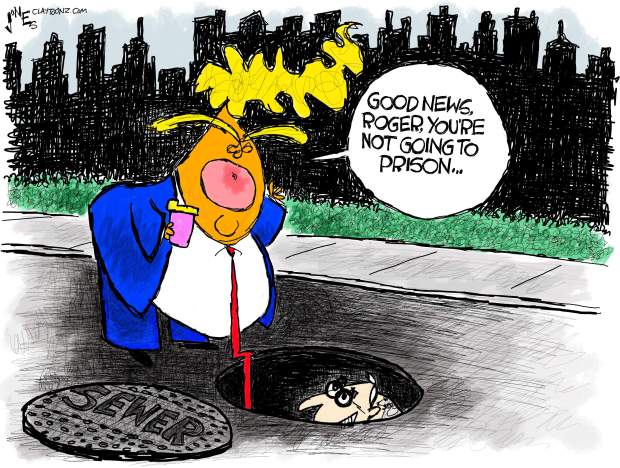 First off, if commuting the sentence for Trump friend, goon, henchman, pal, buddyboy, creeper, slimeball of the first degree, and all-around wart on the taint of humanity Roger Stone wasn’t corrupt, then it wouldn’t have been done late on a Friday night.

Why do fuckers do dastardly deeds on Fridays after 5:00 PM? Because it’s an attempt to limit the political damage as people aren’t paying as much attention to the news at that point. Even I, a news junkie, was eating a sub while watching “Ralph Breaks the Internet” when it came over my phone. Sons of bitches! I was already overloaded with three other subjects to choose from for my next cartoon.

I mean, I still haven’t done something on the Supreme Court and Trump’s taxes, his cognitive test, Goya, or the TikTok ban. Sheesh! I’m going to have to work throughout the weekend.

Donald Trump commuted Roger Stone’s sentence days before he was to be ass-raped in a federal penitentiary in Georgia. Commuting instead of pardoning is probably Donald Trump’s compromise with everyone in the White House who advised him it was a horrible fucking idea to pardon a corrupt sleazebag with a Nixon tattoo on his back. Especially when that corrupt sleazebag is guilty.

Kayleigh McEnany, White House spokesgoon, issued a statement that reads like a Trump tweet. It even had exclamation points (Roger Stone is free!). Now keep in mind, spokesBarbie promised she would never lie to us.

In the statement, she referred to the Russia investigation as a “hoax.” It was not. She claimed the investigation of Stone and the charges were because the Mueller investigation they couldn’t find evidence of collusion between Trump and Russia (they found evidence and Robert Mueller didn’t rule there wasn’t collusion). She argued they went after Stone because of his “outspoken” support for Trump. Never mind the fact Roger Stone lied before Congress. Of course to these goons, lying isn’t criminal.

In her statement, McEnany described Stone’s crimes as “alleged.” SpokesBarbie went to Harvard Law School. She should know that crimes are NOT “alleged” when a jury finds the party guilty on seven counts. She should keep this in mind because it’s definitely going to come up again…a lot.

McEnany also argued that Stone’s health is fragile and placing him in a federal prison in Georgia would expose him to the coronavirus. So what? I thought the White House supported Trump’s contention the coronavirus is 99 percent harmless?

Even Attorney General William Barr agreed with the prosecution and verdict saying they were “righteous” and “fair.” Remember, this is the same fucknut who tried to bury the Mueller report and has helped Trump engage in coverups.

Donald Trump’s commutation of Roger Stone’s sentence falls in line with his firing of the U.S. attorney in New York investigating Trump goons Rudy Giuliani, Lev, and Igor (seriously, motherfuckers named “Lev” and “Igor” are guilty). It’s in line with him putting pressure on the Justice Department dropping its case against Trump goon Michael Flynn. Shortly after the election, expect at least a commutation of the sentence for Trump goon Paul Manafort.

The commutation of Stone’s sentence isn’t just a reward, it’s to keep him from talking. A few days, weeks, or months in a federal prison cell may influence Stone to change his mind and start squealing. So far, Stone has been a good soldier and has kept his mouth shut, but it’s not because of principles or ethics. Look at the guy. He’s a dirty trickster. He is a goon. He doesn’t have real friends. He’s the kind of guy who willingly gets a Nixon tattoo on his back, which might actually come in handy as butt-rape deterrent (who wants to look at that?). He tried to stop one associate from testifying by threatening to kill their dog (Trump should lose the dog lover vote for that alone). If he didn’t believe there was a reward in his future for not talking, he would have talked. And Donald Trump, who isn’t loyal to anyone, is not the guy to die on a cross for.

Trump’s supporters used the whatabout defense last night, as in, “but what about Obama?” Yeah, President Obama pardoned a lot of people. But President Obama didn’t use pardons and commutations as rewards for his friends.

Of course, for that to have happened, President Obama would have had to be like Donald Trump and have thieves, goons, henchmen, and corrupt assholes as friends.

Creative note: While walking near Times Square in Manhattan, I came across some city workers going into the sewers. I told them, “Beware of the C.H.U.D.s”. They were like, “What? Chuds? What the hell is a chud?” They looked at me like I was crazy, which admittedly, I get from time to time. I told them the C.H.U.D.s were from that 80s cult classic about Cannibalistic Humanoid Underground Dwellers in the sewers of New York City. They had never heard of it. It seems to me if your job requires you to go into the sewers of Manhattan, you might want to be familiar with the C.H.U.D.s. Sheesh.