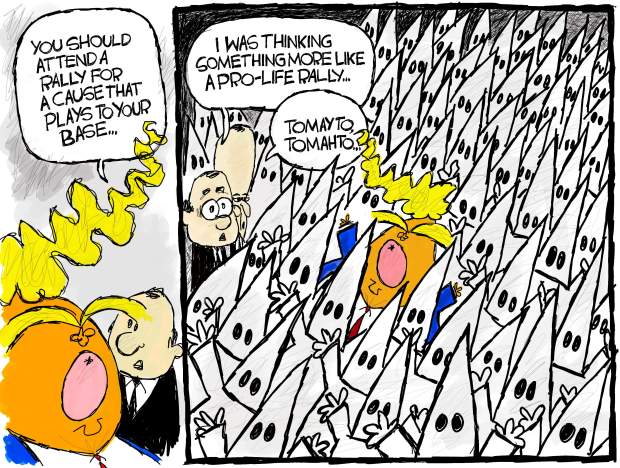 Sometimes I go a while without having a conversation, not a screaming match, with a member of the Trump cult. For starters, I forget that they don’t realize they’re in a cult.

A couple days ago one of my nephews posted a story from 2017 with a headline that Donald Trump made March 29, Vietnam Veterans Day, an official holiday. Immediately, my spidey sense tingled. It didn’t sound right to me because for starters, I hadn’t heard of it yet. It also didn’t sound right because it seemed to come from a legitimate publication, Military.com. But apparently, Military.com has joined the cult and they don’t put any research into their articles.

So, I told my nephew that it wasn’t an actual holiday. In fact, Obama made the same declaration, recognizing the date as a commemoration, but it was just for 2012. Trump did make it for every year. But still, it’s a commemoration, not a holiday. Why is that? Because Donald Trump, nor any president of the United States of America, is a king. It takes a literal act of Congress to make an official federal holiday. A president can make as many declarations as he wants but they’re all pretty much empty except if you’re a Republican, it’ll get you a headline in Military.com by a reporter and editor who don’t do research.

I explained the act of Congress thing to my nephew because it’d be nice to have someone other than myself, my older brother, and my niece as informed people in our family. The rest are total fucknuts. I tried not to be confrontational and my nephew was cordial in return, but he explained why Trump didn’t make it an official holiday. It’s because Donald Trump didn’t want to give federal workers another free day off.

Again, I explained the act of Congress thing. Nephew understood that but again explained how Trump was looking out for the taxpayers and didn’t make it an official holiday. I let it go. It’s a lost cause. But you see what the cult does, right?

They can’t acknowledge Donald Trump can’t do something on his own. They also make up some bullshit because I guarantee you my nephew (who has met Donald Trump and posted a stomach-churning photo of it on Facebook that I should be commended for not commenting on) never heard him say he’s going to commemorate Vietnam Veterans Day, but not make it an official holiday in order to save taxpayers’ money. But he believes Donald Trump isn’t who Donald Trump really is, and instead sees him as someone who cares about him.

Here’s the thing. Donald Trump does not care about you. Donald Trump only cares about Donald Trump. The people who don’t get that are those in the Trump cult, like members of the pro-life movement.

Donald Trump visited an anti-choice, pro-women-persecution rally and the fucknuts went nuts. Trump spoke for 13 minutes and as usual, sang his own praises. He said, “Unborn children have never had a stronger defender in the White House.” And he claimed, “They are coming after me because I am fighting for you.” No, you orange glowing idiot. We’re coming after you because you’re a racist conman tearing the nation apart and you’re trying to steal another election with the help of Russia.

The anti-choice fuckos love Donald Trump because he does what they do. He lies about abortion (like he does about everything else). He makes false claims about abortion laws, like a New York law that “would allow a baby to be ripped from the mother’s womb right up until delivery” or that Virginia Governor Ralph Northam would “execute a baby after birth.” Those are lies. Anti-choice people are huge Project Veritas fans, the outlet that creates fake videos on Planned Parenthood and other issues. They’re gotcha! videos they have to manipulate. But like pointing out facts about Donald Trump, the cult ignores facts about Veritas too.

Donald Trump, who once described himself as “very pro-choice,” doesn’t care about abortion any more than he cares about Vietnam Veterans. Donald Trump was grandstanding to feed his base. And it works because his base is stupid.

Congratulations, anti-choice fucknuts. You have now received the same credibility and legitimacy as Kim Jong Un. Use it wisely.

And why did I use the Klan for this reference? Because Donald Trump is a racist and when it comes to the “pro-life” movement and the KKK, tomayto-tomahto.