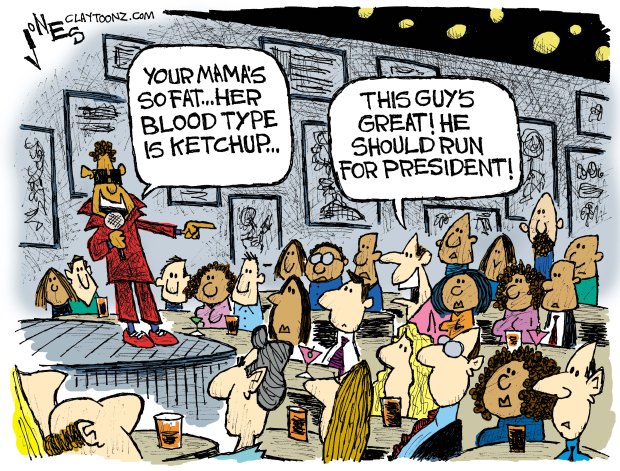 Donald Trump’s penchant for being vulgar and slinging very uncreative personal insults is one of the reasons many believe he isn’t presidential. To take him down Marco Rubio has decided he too does not have to present himself in a presidential manner.

After saying he didn’t want to attack his fellow Republican candidates Rubio has made fun of Trump’s “spray tan,” his spelling, for wearing makeup, for having a “sweat mustache” and insinuated that Donald Trump wet his pants and has a small penis.

Two questions regarding Rubio’s new tactic are: Is it too late for him to take Trump down, and is this diminishing Rubio? Yes and yes.

Do we want a comedian as president? Minnesota elected one to the U.S. Senate. Presidents can tell jokes and Obama has displayed a natural skill at comedic delivery. Rubio, not so much. While Rubio and Obama probably aren’t writing their material, I don’t think anyone in the world wants to take credit for Trump’s set list. Though making fun of the handicapped goes over really well with the Trump crowd.

While Trump isn’t intentionally funny, he’s very entertaining. Entertaining much the same way a train wreck can entertain. Especially if that train is full of Republicans.

And the mama joke in this cartoon: I can’t take credit for it. I found it on the internet on a mama joke site. Most of the jokes weren’t suitable for family newspapers.