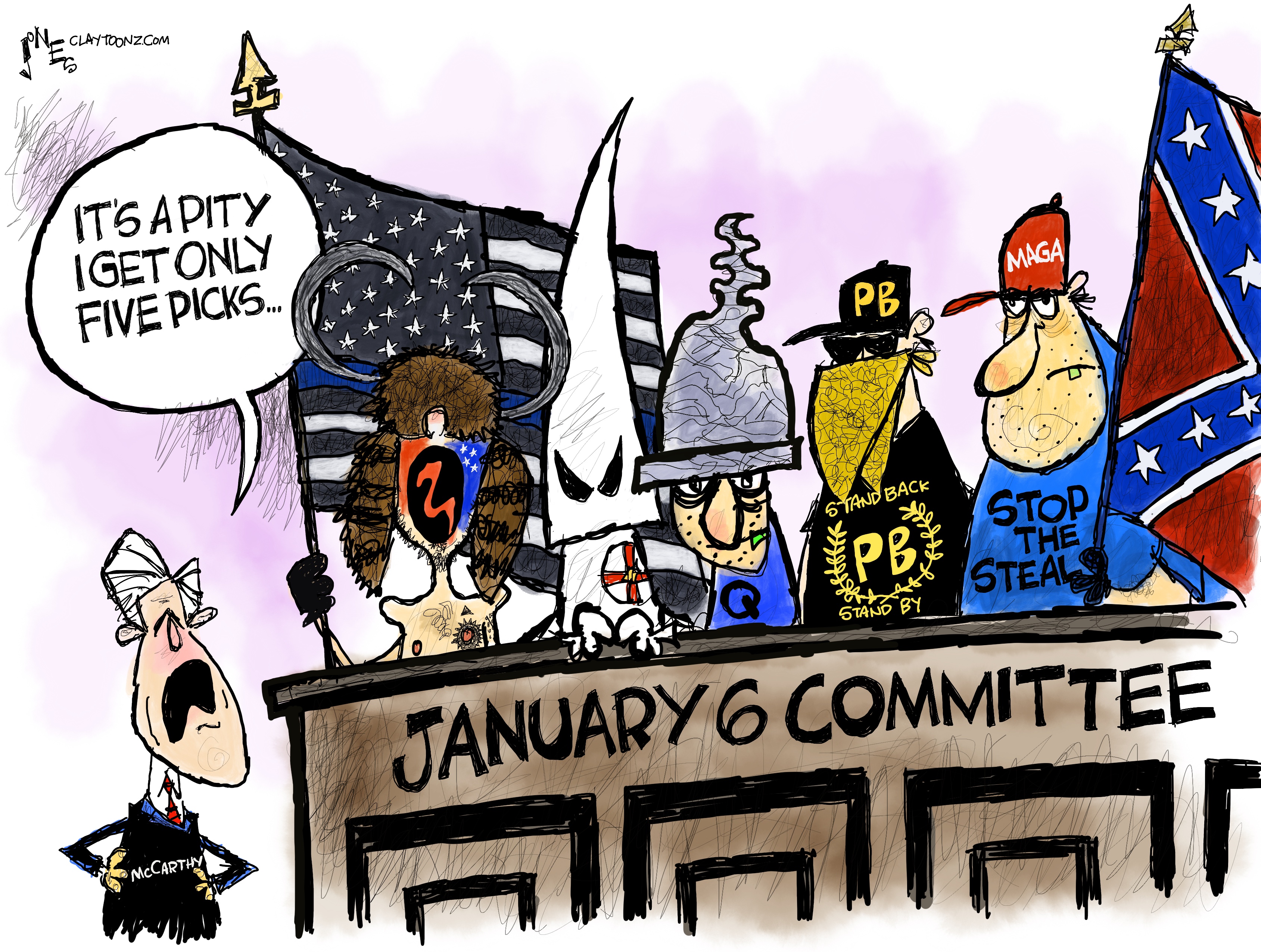 A friend of mine used to hold a July 4th pool party every year…until one attendee got drunk and pooped in the pool. I’m sure it’s just a coincidence the pool pooper is a Republican. But nevertheless, no more July 4th pool parties. And pooping in the pool is exactly what House Minority Leader Kevin McCarthy plans to do in the January 6 Committee.

The first attempt to have a commission to investigate the white nationalist MAGA terrorist insurrection on the Capitol Complex passed the House with very little GOP support, and died in the Senate. Republicans claimed they voted against it because the commission, with equal representation by both parties and each having full subpoena powers, would be too partisan. Before the vote, Democrats gave Republicans EVERYTHING they demanded before they could vote for it…and they still voted against it.

It’s kinda like taking your kids shopping for back-to-school clothes, and they refuse to participate. So after you’re done shopping for them, they get a hair up their ass because they don’t like the clothes you picked, which looks like that cheap-looking checkered suit Matt Gaetz wears. In this example, your kids are right to complain, you monster.

In Congress, Republicans, after being given everything they asked for, still voted against it. Even though they voted against it, we still need to get answers for the January 6 MAGA tiny-dick terrorist attack. So, Nancy Pelosi held a vote for another committee and this time, Republicans don’t have equal representation or subpoena power. Boo-hoo, fucknuts.

Of course, now they’re going to complain and campaign that they weren’t given equal representation and subpoena power. They will gaslight that they were never given a choice.

Kevin gets five picks and Nancy gets eight. Even better, Nancy can veto Kevin’s picks. And from looking at the names being tossed around by the tossers, she may need to veto every one of them.

Originally, Kevin threatened his members and said if they accepted an appointment to the committee, he would take away all their other committee assignments. Republicans are already afraid of this committee. They want all talk of the racists-for-Trump terrorist attack to go away. Talking about it can hurt the entire party in the 2022 midterms, upset the MAGAt base, and upset Donald Trump. If any Republican takes it seriously and ask serious questions like, “How many Nazis-for-Trump were in the riot?”, then Donald Trump may primary them.

Kevin is also afraid of who this committee may have questions for. Kevin is afraid they may subpoena Kevin. Also, the committee may subpoena Mo Brooks, Rudy Giuliani, Donald Trump Jr, and even Donald Trump. Keep in mind, it’s a crime to lie to Congress. Mo Brooks is currently using defending himself in a lawsuit for inciting the riot with the argument he was lying about the election being stolen in his capacity as a federal official.

The problem for Kevin is: Do Republicans refuse to work with the committee and risk coming off as disinterested in protecting our nation from terrorists, or do they do the jobs they were elected to do and risk pissing off the racist MAGAt base and Trump in the process?

First off, Kevin can’t pick people like Lauren Boebert, Matt Gaetz, or Marjorie Taylor Green. They can’t even pretend to be serious in addition to being too stupid for the committee. Appointing one of those shitweasels will only serve to embarrass the GOP…which should already be embarrassed.

Kevin plans to pick shit stains like Jim Jordan who will use the committee to deflect from the white nationalist terrorist attack. Nancy should veto the selection of Jim Jordan. She should veto anyone who voted against certifying the election. Every member who voted against certifying the election voted against democracy. They voted with the terrorists. In fact, it’s illegal to be in Congress after you supported enemies against the United States of America. Every single one of those Republicans who voted with the terrorists should be removed from Congress.

Nancy, please don’t allow any supporters of terrorists to sit on this committee. Let them fling poo on their own time. If they want to shit in a pool, there’s one at Mar-a-Lago.