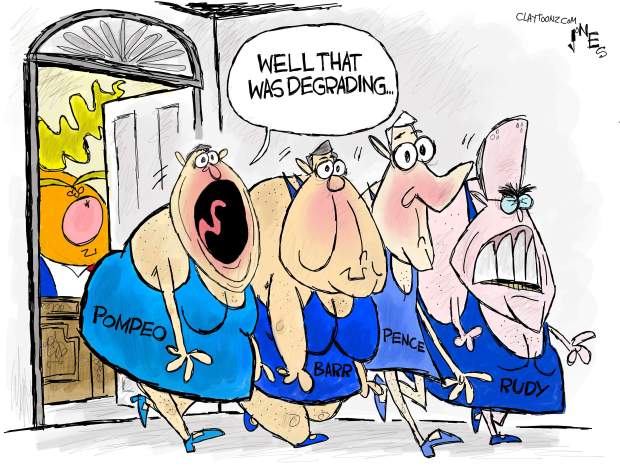 Yesterday, a screenshot circulated on Facebook of a tweet attributed to Monica Lewinsky stating she would “take one for the team” and do to Donald Trump what she did to Bill Clinton in the Oval Office as “that’s the only thing that can convince Republicans to impeach.”

If you saw the tweet, shared it, liked, commented, or cheered Monica on, I hate to burst your bubble. It’s fake. She did not create that tweet. But it does create an interesting discussion.

What would convince Republicans to impeach Donald Trump? How far are they willing to go to debase themselves and lose all dignity for a horrible troglodyte such as Trump?

Lewinsky was probably the first victim of cyberbullying and it was her fake friend who convinced her to preserve the “evidence” on the blue dress, and not take it to the dry cleaners. Monica wanted to wear the dress to a family function and her “friend,” Linda Tripp, who was secretly recording her, manipulated her into keeping the dress by telling Lewinsky it made her look “really fat” and she shouldn’t wear it again in public.

Later, the dress was turned in as evidence which proved Bill Clinton had lied about his relationship with her. It seems kinda crazy twenty years later that the dress was even sent to a lab to prove a president was lying about receiving oral sex in an investigation that started over a 1970s land deal. For that lie, the Republican-controlled House of Representatives impeached Bill Clinton. Of course, the Republicans had to go through three Speakers before they could finally land one to preside over the impeachment who hadn’t also committed adultery. Years later, we discovered the Speaker they settled on was a pedophile. Ya’ gotta love Republicans, right?

Just like the blue dress incriminated Bill Clinton of lying about a personal matter, there’s incriminating evidence that should impeach Donald Trump.

The summary of Trump’s phone call with the president of Ukraine incriminates him of asking a foreign nation to meddle in our election. It also shows there was a quid pro quo, not that it’s needed. Texts messages from U.S. diplomats show there was a quid pro quo in Trump’s dealings with Ukraine. Rudy Giuliani incriminates himself and Trump every time he opens his horrid mouth. Now, there are records incriminating Attorney General William Barr, Secretary of State Mike Pompeo, and Vice President Mike Pence in this scheme. On top of all that, Trump has publicly called for other nations to help him in the next election and has bullied the whistleblower. In case you’re a Republican, both of those acts are illegal.

Edwin Edwards was governor of Louisiana for 16 years, but not all at once. The voters would elect him, toss him out, elect him again, toss him out, etc. It did help that the last time he won, his opponent was a Grand Wizard. During that last race in 1992, there were bumper stickers reading, “Vote for the crook. It’s important.” Edwards was a crook but he had a strong base of support. But even he had limitations which he acknowledged when he famously said, “The only way I can lose is if I’m caught in bed with either a dead girl or a live boy.” Louisiana might be the best state for political cartoonists.

While being caught with a live boy would have ruined Edwards, it probably wouldn’t hurt Donald Trump. Not with these Republican sycophants and the evangelicals who for some reason believe Trump is a God-fearing Christian. They’d probably say, “Jesus wanted him to have that boy.”

Don’t believe me? Let’s look at a few of the Republicans serving today who were around during the Clinton impeachment.

Lindsey Graham took impeachment seriously in 1999. He said, “You don’t even have to be convicted of a crime to lose your job in this constitutional republic if this body determines that your conduct as a public official is clearly out of bounds in your role.” He also said, “Impeachment is not about punishment. Impeachment is about cleansing the office. Impeaching is about restoring honor and integrity to the office. Today, his integrity has him saying, “Impeachment over this? What a nothing (non-quid pro quo) burger.”

Senate Majority Leader Mitch McConnell had a tough time with Bill Clinton’s lying. In 1999, he said, “The president would seek a win at any cost if it meant lying to the American people. If it meant lying to his cabinet.” Today, “If this is the launching point for the House Democrats impeachment process, they’ve already overplayed their hand.”

Newt Gingrich was a champion of impeaching Clinton and cried in 1998 about the “level of disrespect and decadence that should appall every American.” Today, he says that Democrats are pandering to “partisan extremes.”

In 1999, Republicans were sending dresses to labs searching for semen. Today, half of them can’t bother to read a five-page summary of a transcript.

Republicans have debased and degraded themselves far more than Monica Lewinsky could ever imagine. At least in Monica’s case, she was a naive, young girl who was taken advantage of by a smooth-talking president of the United States. But her actions never allowed Clinton to destroy the nation. These Republicans know exactly what they’re doing as they’re turning their party into a cult and sacrificing our nation because they’re afraid of Trump’s base. And you know they aren’t swayed because Donald Trump is a smooth talker.

Pompeo, Barr, Giuliani, and Pence have each traded in their reputations, dignity and self-respect for Donald Trump. They have sold their souls to this conman. They’ve lost more by their actions than they ever could have merely by wearing blue dresses in the Oval Office.

At some point, I hope they discover the bad taste in their mouths.

Creative Notes: One of my proofreaders looked at several of my rough ideas Thursday night and said about this one, “I didn’t really get the one about the guys in blue. Handmaid’s Tale?” And about ten minutes later, she messaged me with, “Oh my god!” My girlfriend, Amanda, got it immediately. But then again, she is weird enough to be dating a political cartoonist.