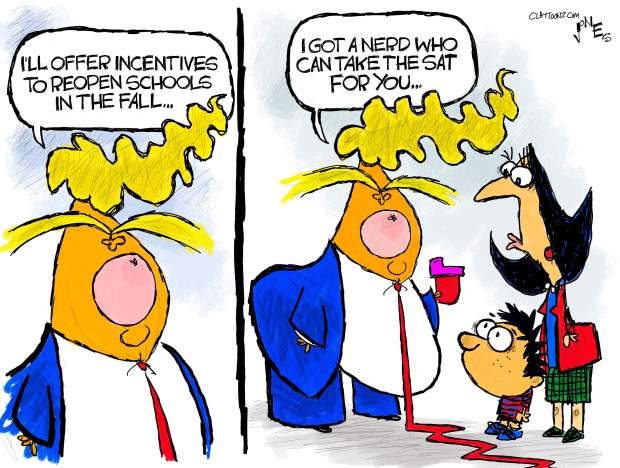 Is it plausible Donald Trump cheated on his SATs? I think it’s implausible he knows how to spell “SAT.”

CNN obtained a copy of Mary Trump’s book, “Too Much and Never Enough: How My Family Created the World’s Most Dangerous Man.” And so far, the biggest revelation from Trump’s niece that doesn’t surprise anyone is Donald Trump, the world’s stupidest man, paid a nerd to take his SAT for him.

Donald Trump has boasted about being at the top of his class. While he’s never released his school transcripts (despite barking for President Barack Obama to do so), professors and classmates have spoken out that Donald was nowhere near the top of his class. It would amaze most if he was able to work the doorknob to get into class. And heaven forbid if there were stairs.

According to the book, Donald Trump paid someone to take his SAT test to get into the University of Pennsylvania’s Wharton Business School. She didn’t just make the claim, she named the guy who “supposedly” took the test for Dumb Donald. Later, he still needed assistance from his brother and father to twist elbows for him to get into Wharton.

If you’re looking for real juicy dirt like there is a pee tape, he had a guy killed, details of an Epstein party with underage models, he lost his penis in a smelting accident, or he wears a diaper, or his real father’s an Oompa Loompa, you’re going to have to look elsewhere. Sorry.

Of course, Kaleigh McEnany, the White House Spokesgoon and others cried out that the SAT story is a big fat lie. Of course, the only way they know it’s a lie is because that’s what Donald Trump, the teller of over 19,000 lies since coming into office, has told them. The people who work for Donald Trump, and those who support him, pretend he’s not stupid, racist, or a horrible human being.

Donald Trump is horrible; he’s willing to risk your children’s lives for his selfish needs. Don’t make the mistake of believing Donald Trump cares about you, your children, or anyone who isn’t Donald Trump. He continues to visit hotspots for the coronavirus where members of his campaign, the Secret Service, his supporter Herman Cain, and even his idiot son’s girlfriend contract the virus…yet he continues to go to campaign in hotspots to satiate his frail ego.

Yesterday, he said he’s going to pressure governors and mayors to reopen schools this fall. He did this while lying that the United States has the lowest mortality rate from the coronavirus in the world. He claimed Democrats are playing politics in wanting the schools to remain closed. He believes it’s all designed to hurt him.

Again, for Donald Trump, everything is about Donald Trump. He thinks the schools are being kept closed to hurt him. He’s playing politics with your kids’ lives.

Just like nobody wants to keep the economy closed forever, nobody wants to keep children home. We all want them in schools. The question is, “when?” You have to be insane if you think it helps anyone politically to force parents to be home day after day with their sticky-handed screaming snot factories. That wouldn’t endear you to anybody.

The thing that scares me most is that Trump supporters will risk their children’s lives for their messiah. I’m astounded people will sacrifice their principles, ethics, and honesty for this racist reality TV host who’s so stupid, he thinks we can nuke hurricanes. Yet, now they’ll risk their children’s lives for this narcissistic asshole. It’s not like he has to entertain Barron on a constant basis. Just like SAT test, he has someone to do that for him.

Before you send little Johnnie and little Debbie back to school to help your false prophet claim everything’s back to normal so he can be reelected, keep in mind the lies he’s already told about the virus.

It was supposed to disappear last April. We’re now in July. In case you’re a Republican, April is before July. Now, Donald Trump is boasting about a low mortality rate which is horrible because that means a lot of people are about to die. Make sure it’s not your child.

Every single test that’s been thrown at Donald Trump since he became this nation’s president (sic), he’s failed. He never built the economy so we can’t have faith he’s capable of rebuilding it. He’s failed with the coronavirus. He’s failed in race relations.  And right now, he’s failing our country.