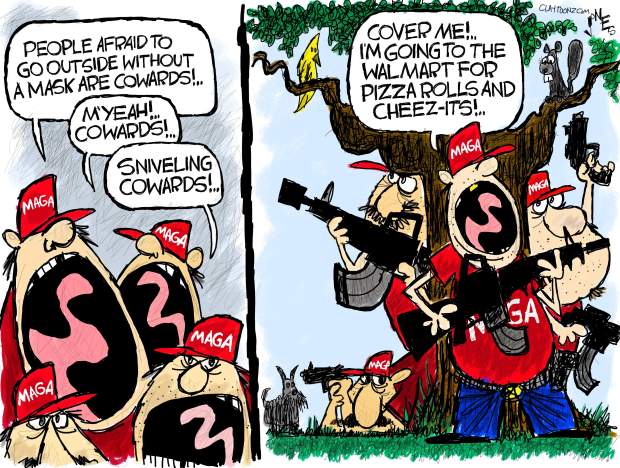 I’ve always liked the actor Kevin James. I liked his show, King of Queens, and thought he did a great job and matched well with Will Smith in Hitch. Heck, I even liked Paul Blart a little. Granted, everything else he’s done has kinda sucked, but I still liked him. He’s always seemed like an everyman kinda dude. Now, I like him a little less.

James has a YouTube channel where he posts short films. His latest film is about two men on the run from the authorities for being out in public without wearing masks and for shaking hands. Seriously.

There are now 86,000 deaths in this nation from the coronavirus and Kevin James has joined all those idiots crying about their “freedom” when nobody has taken their freedom. Despite nobody being arrested for not wearing a mask or for shaking hands, James has joined in with the shitweasel brigade and the Flat Earthers. I understand satire but I also understand propaganda. This tilts more toward the latter. This is some real Ben Garrison shit.

These idiots who scream about their liberties and storm state capitals with guns, Nazi symbols, and nooses, NEVER speak out when a black man is profiled or killed by the police. They NEVER speak out when voting rights are denied to non-white American citizens. They NEVER defend free speech except whenever a university disinvites a Nazi from speaking on their campus. But now, they have a new hero in Kevin James. Congratulations, Kevin. You’re in the same club as Ted Nugent and James Woods. Heck, you’re in the same club as the worst Baldwin brother, You know. Whatsisname Baldwin brother.

These people who have watched Red Dawn too many times act as though their purchase of a gun is supporting the Second Amendment. They believe carrying an assault weapon with them everywhere they go, whether it’s Chick-fil-A or the state capitol building, defends their Second Amendment Rights.

These gun nuts who describe themselves as “Constitutionalists” only know one Constitutional Amendment. And even then, they bastardize it by ALWAYS omitting the “well-regulated” part. Anytime you mention “regulation” in the context of guns, they scream you’re taking away their Second Amendment rights despite the fact “well regulated” is literally in the Second Amendment. I swear. Look it up.

But, if their buying a gun reinforces their Second Amendment rights, then me telling them they’re all a bunch of racist Kool-Aid drinking cultist knuckle-dragging treasonous Putin-Loving dumbasses reinforces my First Amendments rights.

Keep in mind, the people who believe being “forced” to wear masks and closing the country is all designed to steal their freedom and punish Donald Trump also believe Climate Change is a hoax.

Now, they’re saying you’re a coward if you don’t leave your house without a mask. Why look how brave they are by going outside without a face covering. Why look how brave their president (sic) is being the only one not wearing a mask while visiting a PPE plant or a factory that actually makes masks. They are so proud. I’m sorry but I don’t think stupidity is something to be proud of.

The people staying home and wearing masks are the true patriots. They’re not just protecting themselves. They’re protecting you even though you don’t deserve it.

The real cowards are supporters of Donald Trump. They’re afraid to leave their houses without assault weapons and they vote for a guy who runs on a campaign of fear. Trump supporters are afraid of everything.

But then again, calling us “cowards” for doing the right thing and protecting our nation is once again them projecting. We need to protect our nation from the coronavirus and all…

…we need to protect our nation from gun-toting sniveling coward Trump supporters.