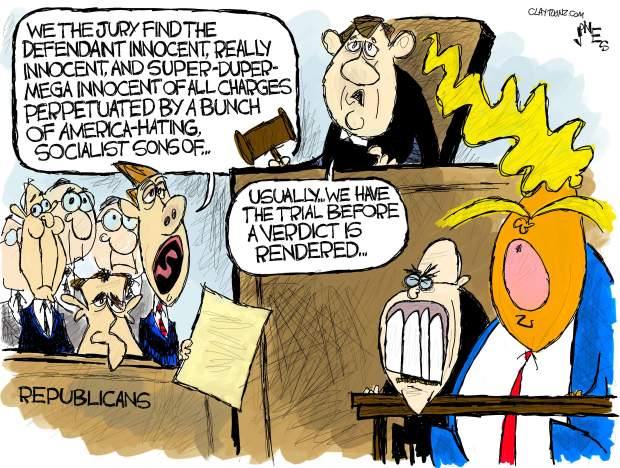 Is anyone surprised that Mitch McConnell, Lindsey Graham, and other Senate Republicans are promising to violate an oath before they even swear to it? Of course not as these are the same Republicans who have given up on everything they used to believe in. Remember when they claimed to believe in family values, the military, patriotism, reduced debt, and protecting our nation from Russia?

Mitch McConnell didn’t have any problem violating Senate rules and the Constitution when he refused to hold a hearing for President Obama’s last Supreme Court nominee and then handing that nomination to Donald Trump. McConnell didn’t have any problem with blocking Obama’s nominations to lower courts either. While Republicans claim Obama left vacancies for them to fill, the truth is that only 28.6% of his judicial nominees were approved by the Republican-led Senate during the last two years of his presidency. While appearing on Sean Hannity’s show on Fox News, McConnell took credit for blocking Obama’s nominees after Hannity wondered aloud why Obama left so many vacancies. And then McConnell cackled which will probably keep me up at nights for several years to come.

Senators are required to make a new oath of office before an impeachment trial. Article I, section 3, clause 6 of the Constitution sets out that senators sitting on a trial of impeachment “shall be on Oath or Affirmation.”

According to Rule XXV of Senate Rules in Impeachment Trials, all senators must make the following oath: “I solemnly swear [or affirm, as the case may be] that in all things appertaining to the trial of the impeachment of [the person being impeached], now pending, I will do impartial justice according to the Constitution and laws: So help me God.”

McConnell told Hannity, “Everything I do during this, I’m coordinating with the White House counsel. There will be no difference between the president’s position and our position as to how to handle this.” This was probably followed by more cackling. He said he will be working in “total coordination with the White House counsel’s office and the people representing the president in the well of the Senate.”

Lindsey Graham has stated he has no intention of being an impartial juror. He has stated a refusal to listen to the evidence and that there shouldn’t even be a trial. Back in 1998, Graham scolded his colleagues for making decisions before the trial. He said, “Let the facts do the talking,” and “don’t decide the case before the case is in.”

Graham and McConnell have no problems being hypocrites and telling us out loud that they plan to conduct a sham of a trial. Since they don’t have any problem violating an oath let’s hope their voters do.

Why vote for a politician who promises to break promises? If they are announcing they will violate an oath to be impartial, why would anyone believe they’ll keep their oath to protect the United States Constitution? I don’t.

Senators like Mitch McConnell and Lindsey Graham won’t keep their promises to protect the Constitution, the nation, or even the presidency. If anything, they’re promising to betray the nation.

They are promising the trial will be a sham just as they are as United States Senators.