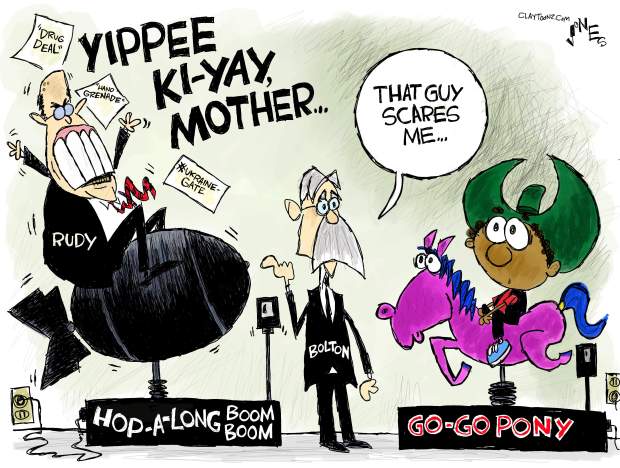 Nobody liked the idea of John Bolton as Trump’s national security adviser. Bolton, a longtime war hawk who has publicly endorsed starting a war with every nation hostile to the United States, was now in an influential position close to a president who could be influenced by the slightest flattery. “Wow! That was some insightful tweeting today at Kristen Stewart’s expense today, you stable genius you.” The next thing you know, we got a Bay of Pigs do-over.

What probably prevented Bolton, who still believes invading Iraq was a fantastic idea, from effectively advancing his own agenda is that half the world’s tyrants he wants to bomb are tyrants Donald Trump idolizes and claims he receives “beautiful” letters from. During Bolton’s tenure, Trump said, “I actually temper John.” After Bolton resigned and Trump claimed he was fired, he said Bolton was “holding me back.” Yikes.

While intelligent people who aren’t in a rush to bomb half the planet were glad Bolton was gone, nobody liked the way it went down. While John Bolton is eager to start needless wars with our nation’s enemies, at least he is able to identify our enemies.

Now, it’s come to light that John Bolton was the voice of reason in the Trump administration.

Former White House aide Fiona Hill testified before three House committees that John Bolton objected to the campaign pressuring Ukraine to dig up dirt on Trump’s political opponents. Bolton is not a liberal or friend to Democrats and has propped up his own conspiracy theories in the past. But even he saw this for the shitshow that it is.

According to Hill and two other witnesses, Bolton got into a heated exchange last July with European Union ambassador Gordon Sondland about the campaign to withhold aid to Ukraine unless they began an investigation into Hunter Biden, the son of Democratic candidate and former vice-president Joe Biden.

Hill testified that Bolton told her to notify the chief lawyer for the National Security Council about a rogue effort by Sondland, Rudy Giuliani and Mick Mulvaney, the acting White House chief of staff. He told Hill to tell the lawyer, “I am not part of whatever drug deal they’re cooking up.” In case you’re a Republican, “drug deal” is a metaphor.

On another date, Bolton told Hill, “Giuliani’s a hand grenade who’s going to blow everybody up.” That’s pretty much what’s happening now. It’s blowing up. And again for our Republican friends, “hand grenade” is a metaphor. There weren’t any real hand grenades.

There are more hearings scheduled for this week. Coming up is George Kent, deputy assistant secretary of state for Europe and Eurasia, Gordon Sondlond (who will either engage in coverup and obstruction, come clean to save his own ass, or refuse to show up), and Counselor of the United States Department of State T. Ulrich Brechbuhl (who’s close to Secretary of State Mike Pompeo).

The House has also subpoenaed documents from Sondland, Giuliani and his two goons who were arrested last week, Mulvaney, Secretary of Energy Rick Perry, Mike Pence, acting Director of the Office of Management and Budget Russell Vought, and Pentagon officials (to explain the delay in providing aid to Ukraine).

This is stupid Watergate, but instead of following the money, we need to follow the goons. Imagine what we’ll know by tomorrow.

What I know right now is Donald Trump is a criminal and he should be impeached. Any administration where John Bolton is the reasonable one needs to be tossed out.