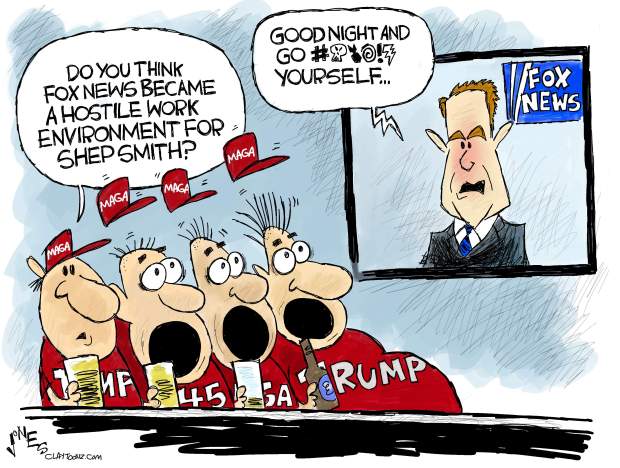 It doesn’t take a lot to receive Twitter attacks from the current president (sic) of the United States if you’re a journalist on a national news network, but it’s significant if that news personality is on Fox News, a.k.a., Trump TV.

This may come as a shock to you but there are journalists at Fox News. Of course, they’re outnumbered by those who slant the news for a conservative audience and outright conspiracy theorists, but they’re there. Shep Smith is one of them.

Smith has made it a practice, not just to report actual facts on his 3:00 PM show, but to debunk the lies of Donald Trump, a.k.a., Liar-in-Chief. Smith wasn’t just debunking Trump. He was counteracting misleading information and lies from the show’s morning and evening pro-Trump talk shows, a.k.a., fucknuts.

Trump often attacked Smith and once tweeted the greatest insult of all, at least from his perspective. He tweeted, “Watching Fake News CNN is better than watching Shepard Smith, the lowest rated show on @FoxNews.” Oh my.

But Smith wasn’t just attacked by Trump for reporting facts and debunking lies. His colleagues at Fox News such as Sean Hannity (who boasts about not being a journalist despite being on a so-called news network), Tucker Carlson, and Jeanine Pirro, a.k.a., Trump’s butt poodles, would often go after him on the air. Earlier this month, Smith publicly clashed with Tucker when he failed to defend their colleague, Andrew Napolitano, after a guest called him a “fool.”

It’s not that Shep Smith was a liberal in a conservative wasteland. It’s that he was a journalist at an outlet, one he joined in 1996, that catered to an audience demanding propaganda over news. Fox News doesn’t lead the viewers as much as its viewers lead it. Yes, Fox is the number one news channel if you consider it news. And, it’s tough to retain credibility when in the evening, your colleagues are speaking at Trump rallies or personally helping Donald Trump with debate prep.

So it came as a surprise, even to his colleagues, when Smith abruptly announced his resignation on the air at the end of his show (and leaving a $15 million a year salary). Neil Cavuto said he was “stunned” and Brett Baier was “shocked.”

Former Fox correspondent, who now works for CNN, Conor Powell, said, “Fox News isn’t just losing Shepard. He surrounded himself by a team of really good producers and reporters who forced correspondents to do more than talking point reporting.” Powell said his fear is Smith leaving means the “Hannity and Tucker narrative will face no internal resistance.”

I understand to an extent where Smith is coming from. I once freelanced for a news outlet that allowed a columnist to repeat Trump’s lies and conspiracy theories. If Trump said it, the columnist took it as fact, such as “caravan invasions,” “millions of illegal voters,” and “crisis actors.” When he wasn’t engaging in lies and conspiracy theories, he was sloppy and honestly, stupid, such as the time he referred to a gospel choir in the United Kingdom as “African-American.” My problem wasn’t in disagreeing with his “work,” but that the outlet allowed it or worse yet, believed it. Even opinions need to be based on facts. Opinion news is still journalism. While his work didn’t influence mine, the outlet’s lack of interest in journalism ethics and standards was an embarrassment to be associated with. The editor once asked me to steal an idea from a meme. A MEME! I quit.

Announcing his resignation, Smith said, “Even in our currently polarized nation, it’s my hope that the facts will win the day. That the truth will always matter, that journalism and journalists will thrive.”

I expect journalism to thrive, but not at Fox News, a.k.a., Faux News.