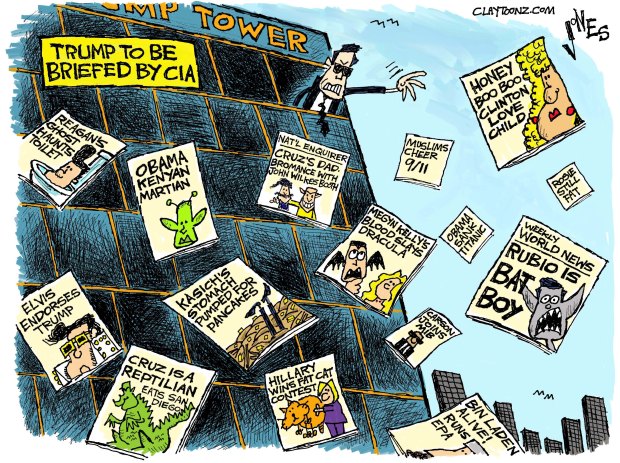 Now that Donald Trump is the presumptive Republican nominee he is going to receive briefings by the CIA. Yes, the Central Intelligence Agency. An Agency with the word “intelligence” is going to tell Trump secrets. Trump, the guy who gave out Lindsay Graham’s phone number at a campaign rally. Donald Trump. That guy.

Donald Trump, who doesn’t have the intelligence to realize a taco bowl isn’t authentic Mexican food (and whether his restaurant serves them or not), is going to receive government secrets. The odds of Trump actually becoming president are very remote, but every day a new potential horror is revealed. We’re worried about Hillary’s email server? A greater security risk is Trump’s mouth.

Since 98% of everything Trump says is a lie, the only good thing about any of this is that if he does spill a secret, no one is going to believe him…well, except for 30% of Republican voters.

Donald Trump LOVES the National Enquirer. He believes it’s real news. The National Enquirer ran two stories on Ted Cruz and Trump used both against his opponent. Those two stories involved Cruz’s father being connected to Lee Harvey Oswald (go ahead and laugh) and Ted Cruz being a super stud having multiple affairs (go ahead and laugh much harder). It also reported that Ben Carson once left a sponge in a patient’s brain. Turned out that story was false and the sponge was actually Ben’s brain.

Trump is buddies with the CEO of the Enquirer, David Pecker. No, I am not making that name up. Trump even tweeted and bragged about pecker (the CEO) and that he should take over Time Magazine. There is something more frightening to journalism than another Rupert Murdoch purchase.