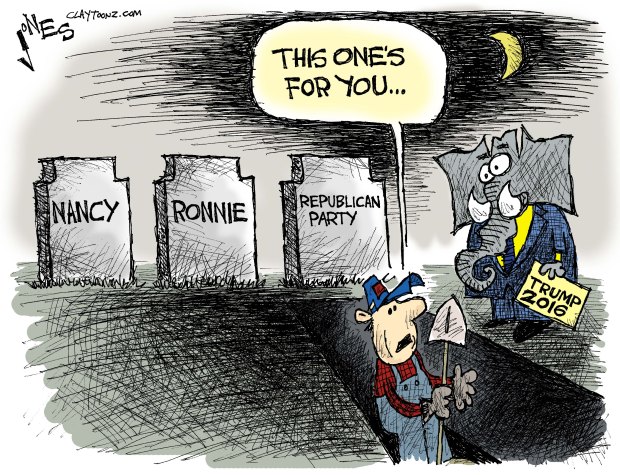 A lot of people speculated during Nancy Reagan’s funeral yesterday that Ronald Reagan’s Republican party has died along with her. I’m sorry but I believe that party died seven years ago, at least.

When this country elected Barack Obama to the presidency it proved just how good this nation can be. The Republican Party took the same opportunity to prove just how awful it could be.

The GOP reacted to the very first black American becoming president that they questioned his eligibility. They concocted conspiracy theories to prove he was born in Kenya. They questioned his religion. They accuse him of apologizing for America’s exceptionalism. They swear he’s siding with those who wish to harm America. They say he’s destroying the Constitution. They swore not to cooperate with him on any bills and for once, they kept a promise. They swore to make him a one-term president, and that’s a promise they didn’t keep. They created the Tea Party. They gave us Sarah Palin. They gave us Ted Cruz. They gave us Donald Trump. They gave us Ted Nugent.

After seven years of Obama’s presidency 43% of Republicans believe he is a Muslim. A recent CNN poll finds that 61% of Donald Trump’s supporters believe the president was born outside the United States. That’s not just being stupid. That’s choosing stupidity.

You look at what the GOP has done over the last seven years. The lack of cooperation. The shutting down of the government over spending that was already authorized. You can find all sorts of things to criticize Reagan over but you can’t say he didn’t cooperate, negotiate, deal and find common ground with his opposition. When we elect Republicans and Democrats, we put them to work to do the same job. All they have done for their salary over the past seven years is scream and try to make things worse. They have tried to hurt this nation in order to embarrass and destroy one man in a political manner. That’s not patriotism. It’s not being a loyal American.

It’s not even being a loyal Republican.