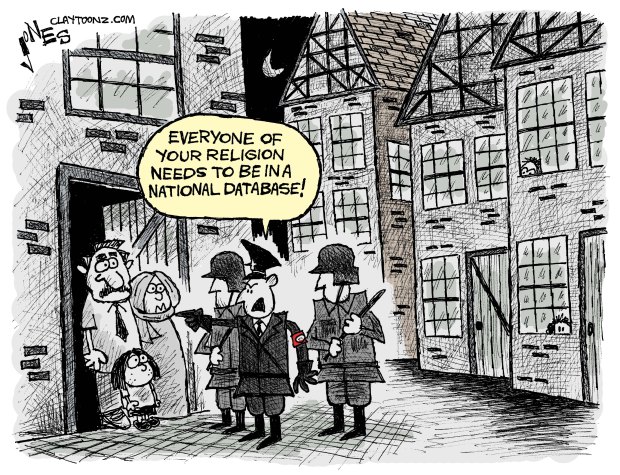 People always play the Nazi or Hitler card when arguing politics. It goes for conservatives and liberals alike. It’s one of those “oh no he didn’t.” It gets tiresome and it usually gets you ignored pretty quick. Rightly so.

The most recent tiresome example is the comparison of Democratic Socialists to National Socialists. The Nazis were National Socialists and if you know anything about history, there wasn’t anything Democratic about the Nazis. The word “Democrat” isn’t the word to fixate on. I’m more concerned with nationalism. Anyone making the comparison between Democrats and Nazis is just a trolling moron. You might as well say vegetarians want to gas Jews, invade Russia and steal art because Hitler was a vegetarian. Hitler also loved dogs and opposed cruelty to animals. Go figure. Hitler also initiated the Volkswagen Beetle. Driving a tiny car that looks like a shoe and nearly impossible to lose your virginity in does not make you a Nazi.

By the way, Bernie Sanders, the Democratic Socialist, is Jewish.

Now Donald Trump and other conservatives are making an argument that Muslims should be entered into a national database. He also says we should shut down some mosques. It always starts with some. What’s up with Trump? Is he secretly a member of Hydra? If he wins the election I predict he’ll rip his face skin off after being sworn in revealing he’s the Red Skull.

Are these people serious? Are they unfamiliar with what happened in the past when we wanted to put people on a list identified by their religion? Maybe they are aware and they’re big fans of it. He is leading in Republican polls. How disgusting do these candidates have to get before Republican voters say “hey…I’m not sure about that plan.”?

Earlier this week in my community a public hearing was held for a group who wants to build a new mosque. At a town hall meeting in Spotsylvania, in the Fredericksburg, VA, region, two men yelled that all Muslims were terrorists. Police had to end the meeting early because of all the hatred. Never mind the fact the group wanting a new mosque currently has a mosque and has been here for decades and hasn’t been a problem. Oh my God, they’re gonna have a new building to continue doing what they’ve been doing without anything bad ever happening! Somebody stop it!

Republicans love to scream that President Obama and Hillary Clinton never use the term “Islamic terrorists” when discussing terrorism from Muslims. A lot of progressives don’t believe an entire religion and culture should be lumped in with the bad guys. The same people who criticize them for that never call out the people that say all Muslims are terrorists. Should we start calling white people who shoot up schools as Christian terrorists?

When we look back on history we see that at times the United States was on the wrong side when it came to treating refugees and at times its own citizens. We refused to let Jews come to the U.S., with many dying in the Holocaust as a result. We put our own citizens into camps based on their Japanese race. We ostracized and black listed people accused of being Communists. We were on the wrong side of history. It’s amazing that so many are ready to be on the wrong side again.

I’m not afraid of refugees. I grew up surrounded by them. You did too. One of the best men at my wedding was a refugee. Refugees will be vetted. Refugees will not be made up of single men between the ages of 18 and 40. They will mostly be widows, orphans and families. Most of the males will have professional careers. There’s also a very long process to be granted refugee status into the U.S. Congress, which never does anything, voted on a law trying to block refugees from entering the country. How ugly have we become?

Even those five Syrian guys stopped in Honduras with fake passports aren’t dangerous. They’re not refugees either. Four are college students and the other is a professor. There are no links between any of them and criminal elements. Conservatives shouldn’t be afraid of college students…unless they’re black and they want a protest. Also, all of the Paris attackers are from Europe.

Every cartoon I’ve drawn this week has been on issues that resulted from the Paris attacks. I like to vary it up but the national conversation this week has been all about Paris, Syria, and refugees. I feel like there’s a lot to stand up for. It’s very important we don’t go down that Nazi road. I’m not going to be silent on these matters. There are too many people out there who want to take this country backward. They vote. They’re breeding.

If you don’t think it’s a problem that the government goes after Muslims then ask yourself this. Who will they come after next?

Did you like this cartoon? Want to help a cartoonist make a living? Look to the right of this page and make a donation through Paypal. I need to buy pens, paper, and sandwiches. The starving cartoonist appreciates it.