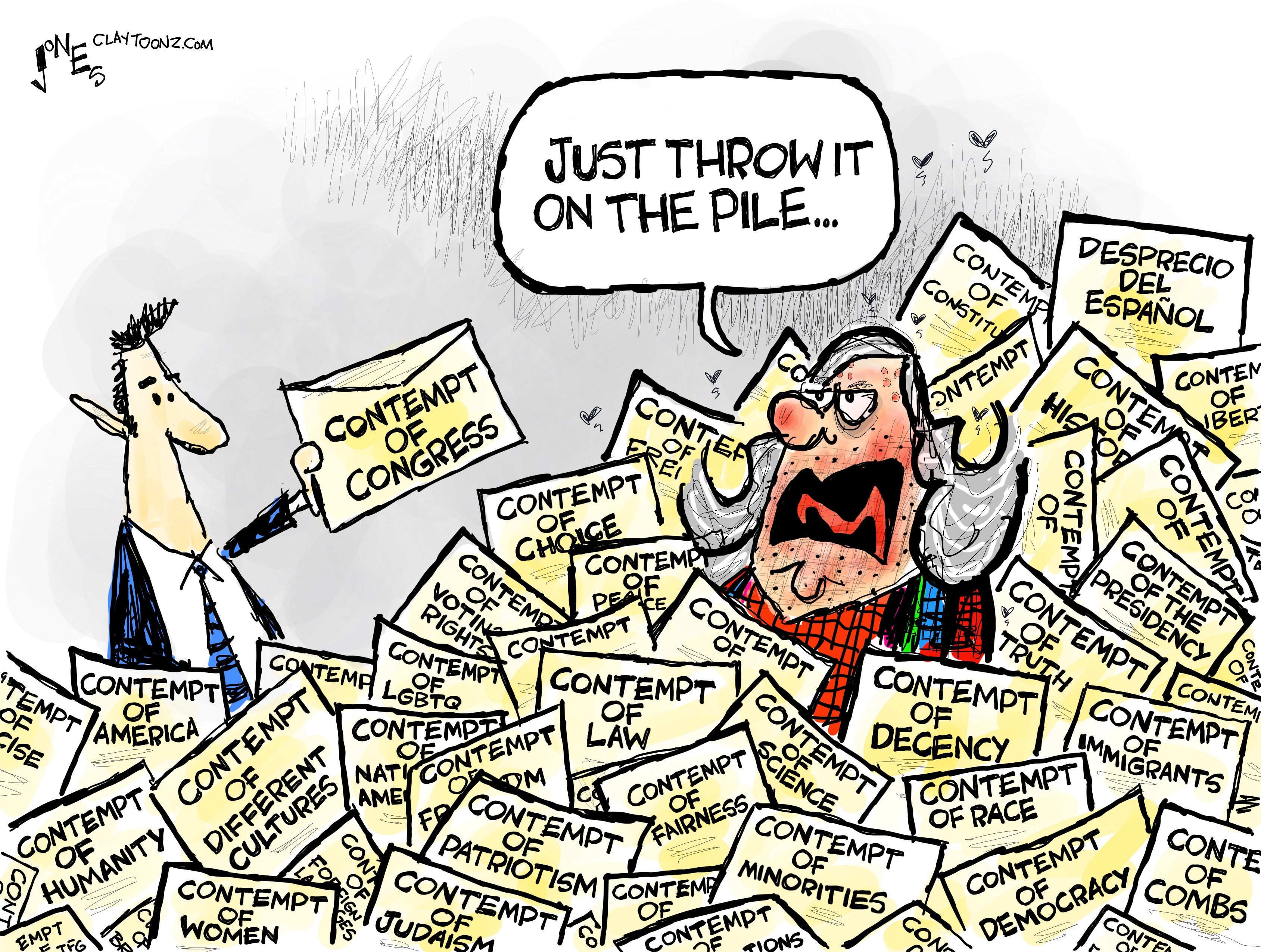 The day before the Trump insurrection on January 6 that was an attempt to overturn a legal election, stop congress from doing a task mandated by the United States Constitution, and install Donald Trump as a fascist dictator, Steve Bannon was on his radio show (yes, he has a radio show) telling his white nationalist audience, “You made this happen and tomorrow it’s game day. So strap in. Let’s get ready. All hell is going to break loose tomorrow. It’s all converging, and now we’re on the point of attack tomorrow.”

Anyway, it sounds like Steve Bannon might have kinda knew something was going to go down on January 6. So, the House Committee investigating the Trump insurrection wants to talk to Steve Bannon, but Bannon isn’t cooperating. He is in direct violation of a congressional subpoena. That is illegal. Steve Bannon was the head honcho of Breitbart, a racist online “news” source for white nationalists, Nazis, and other various hate groups. He was the CEO late in the game of Trump’s 2016 presidential campaign (after his previous campaign mangers were let go for assaulting women and being a Russian mole). He was Trump’s chief strategist in the early days of his administration because there was concern Stephen Miller couldn’t carry all the racist agenda by himself (border wall, Muslim ban, shithole countries, banning all non-white immigration, hating Mexicans, etc). He received one of Trump’s last-second pardons for charges in mail fraud and money laundering in tricking racists into making contributions to build Trump’s hate wall on the border.

A lot of people say Steve Bannon is a genius, I mean…scamming racists using their own hate against them for profit was pretty fucking clever, but he also thought racist pedophile and mall-food-court-Jamba-Juice-teenage-talent-scouting aficionado Roy Moore would make a great U.S. senate candidate in Alabama. I think Bannon might be wrong with his claim of executive privilege…but he may know this and be gambling. Gambling for what?

Ya’ see, he doesn’t have to do anything but this helps build his notoriety. He’s gambling on banking off this. If he loses, he can go to prison. After prison, he’ll probably still bank off it.

Steve Bannon is like Ted Cruz. They enjoy being hated. They enjoy being reviled. They enjoy trolling and pissing off decent people. They both enjoy disgusting people. They both enjoy every time a child sees them and shrieks in horror. By the way, if you like making this your public profile, you’re probably on the wrong side of everything. But, being on the wrong side of everything sells with the white nationalist Trump base. Did I mention the border-wall scheme? The pitch there was: You can trust Steve Bannon because he hates the same people you do. Imagine what sort of racist shit he can sell after he’s the guy the Deep State sent to prison for standing up for Trump fascism. Maybe Mike Lindell should consider this to help sell his shitty pillows.

Steve Bannon can comply with the subpoena and still not cooperate. Even though he tried to destroy the United States Constitution, he still has the Constitutional right not to self-incriminate. He can plead the 5th and go home. I mean, he might have to sit there all day avoiding questions, but that’ll be nine hours of his ugly mug on TV. As a strategist, he really should go. It would be good for the hate business. But maybe he’s gambling on Trump-tiki-torch sales after prison.

Bannon is probably hoping he can squirm through all this until Republicans take control of Congress in January 2023, that is, if they win the House in the 2022 midterms. He’s already on the vote-fascism tour. He had a hate rally with fellow racist Trump pardonee Milo Yiannopoulos in Maryland this week. It was canceled because Baltimore didn’t want to be swarmed with tiki-torch Nazis which would ruin everyone’s weekend.

Yesterday, the House committee voted to send a referral to the Department of Justice to criminally prosecute Steve Bannon. This is very rare and if it all goes to play, Bannon could spend up to a year in jail.

Does that sound like Night of the Long Knives or what? At a recent rally for Virginia gubernatorial candidate Glenn Youngkin, Bannon with others pledged to a U.S. flag they claimed was waved at the January 6 insurrection. The Nazis did the same thing, pledging to a bloody Swastika flag after the failed Putsch Revolt against the legitimate German government in 1923.

Steve Bannon wants to destroy the government and democracy. He’s making a pitch for a fascist racist state he says will governor for 100 years (Hitler predicted a Nazi state for 1,000 years). I doubt this guy can testify without voicing a lot of his fascist and racist views.

Steve Bannon needs to testify before Congress, but he’s a terrorist sympathizer and hates democracy. He’s a Nazi-wannabe. I’m a wanna-see-Bannon-in-prison.

This nation is under attack from fascists planning another insurrection and a civil war. As if the January 6 insurrection didn’t reveal that, but Bannon’s testimony will expose it even more.

Lock him up. Let’s lock up all the Nazis.

Notes on my book: Tales From The Trumpster Fire: There are ZERO copies of my book in stock, which go for $45.00 each, signed. A new shipment will come in soon. Also, I have copies of my first book from 1997, Knee-Deep in Mississippi available for $20.00.