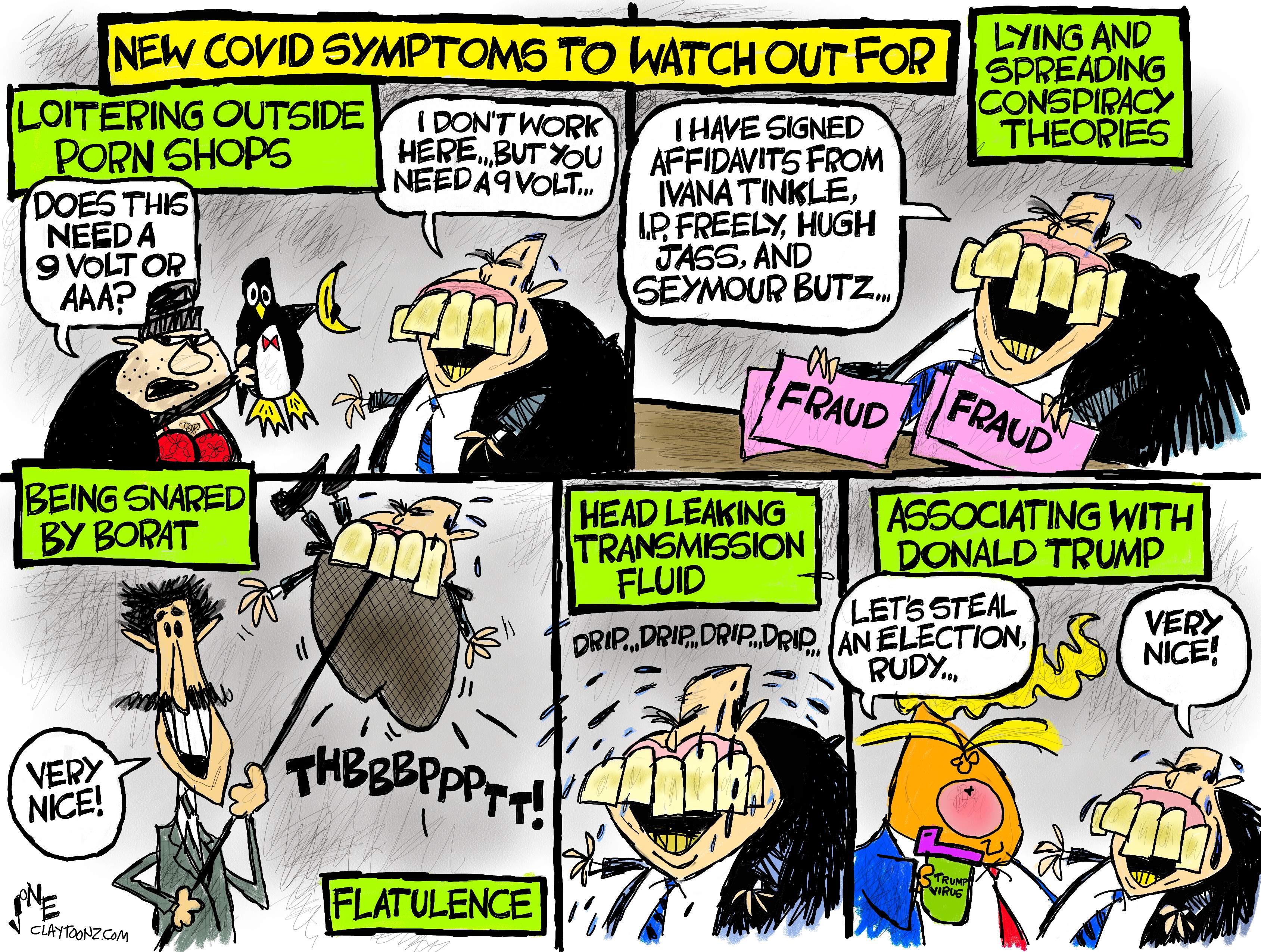 I have a a question for Republicans: When are you going to learn?

After Herman Cain caught the Trump virus and died from it AFTER catching it at a Trump rally, you still haven’t learned.

After cases and deaths spiked in red states where restrictions weren’t put into place, like Florida, you still haven’t learned.

Even after the champion of covid denial and hater of facemasks everywhere, Donald Trump caught the Trump virus, you still haven’t learned.

Sure, I caught the virus too but I wasn’t out telling people not to wear facemasks. I wasn’t discouraging social distancing. I caught the thing while trying to cover newsworthy events and sometimes…shit happens. Plus, it’s really hard to social distance on a train. Amtrak!!! Stop packing people into the same cars. Spread them out.

Now, Rudy is hanging upside down and avoiding sunlight in a Georgetown University Hospital. The hospital at Georgetown is great. I mean, I’ve never had experience with that hospital but I did stay at the University hotel which is connected to the hospital and all the doctors and nurses I saw at the hotel Starbucks looked very competent, and the building is made out very sturdy stuff…so Rudy’s probably in good hands. But still, he wasn’t airlifted by Marine One and taken to Walter Reed Medical Center to be treated by a team of two dozen doctors and experimental medication like Donald Trump was.

But here’s a fact about covid, kids. You have covid before you find out you have covid. Taking a test doesn’t give you covid. Rudy was rushed to the hospital yesterday when it was announced he had covid. That means Rudy was suffering from covid before yesterday…like when he was going to bullshit hearings spreading conspiracy theories while not wearing a mask…he was also spreading covid. The same thing happened with Donald Trump. The day they announced he had covid was the same day he went to the hospital. They lied about when they tested positive and they lied about how bad their cases are.

Another question: If we have to replace all four quarterbacks for the Denver Broncos because they MIGHT have covid, then why couldn’t we have replaced a president (sic) who was actually in the hospital from covid? I mean, couldn’t we have have found a decent wide receiver to be president until Trump got back? That would have been a better choice than Mike Pence…or Donald Trump. Sure, that wide receiver sucked at playing quarterback but you know he’d make a better president than Pence or Trump. But anyway…

Wear a facemasks. Stay home. In another week, we’re going to see the Thanksgiving spike from covid…just before everyone spreads it to the relatives at Christmas. We’re in for a hard winter. Yet, the president (sic) of the United States has only said two things about the Trump virus since he lost the election to Joe Biden. Those two things are: Don’t let Joe Biden steal credit for the vaccine the same way Donald Trump stole the credit for President Obama’s economy, and Rudy has the rona.

Rudy has the rona. Surprised? No. I hope Rudy recovers in a spectacular fashion. I wish him well and hope he can soon return to lying, spreading conspiracy theories on Hannity, melting all over podiums, and farting throughout state legislative hearing committees like the old Rudy we have all grown to loathe and despise.

And now because some you are going to ask, and I am really fortunate that so many care, but…I HATE being asked multiple times a day and having to reply to each person individually…or when people message AFTER I put out a public statement I’m doing fine….I’m doing fine. I’m pretty sure it’s gone and all I have left are the after effects, like not being able to smell, occasionally dizziness, and falling down stairs. Thanks for asking.