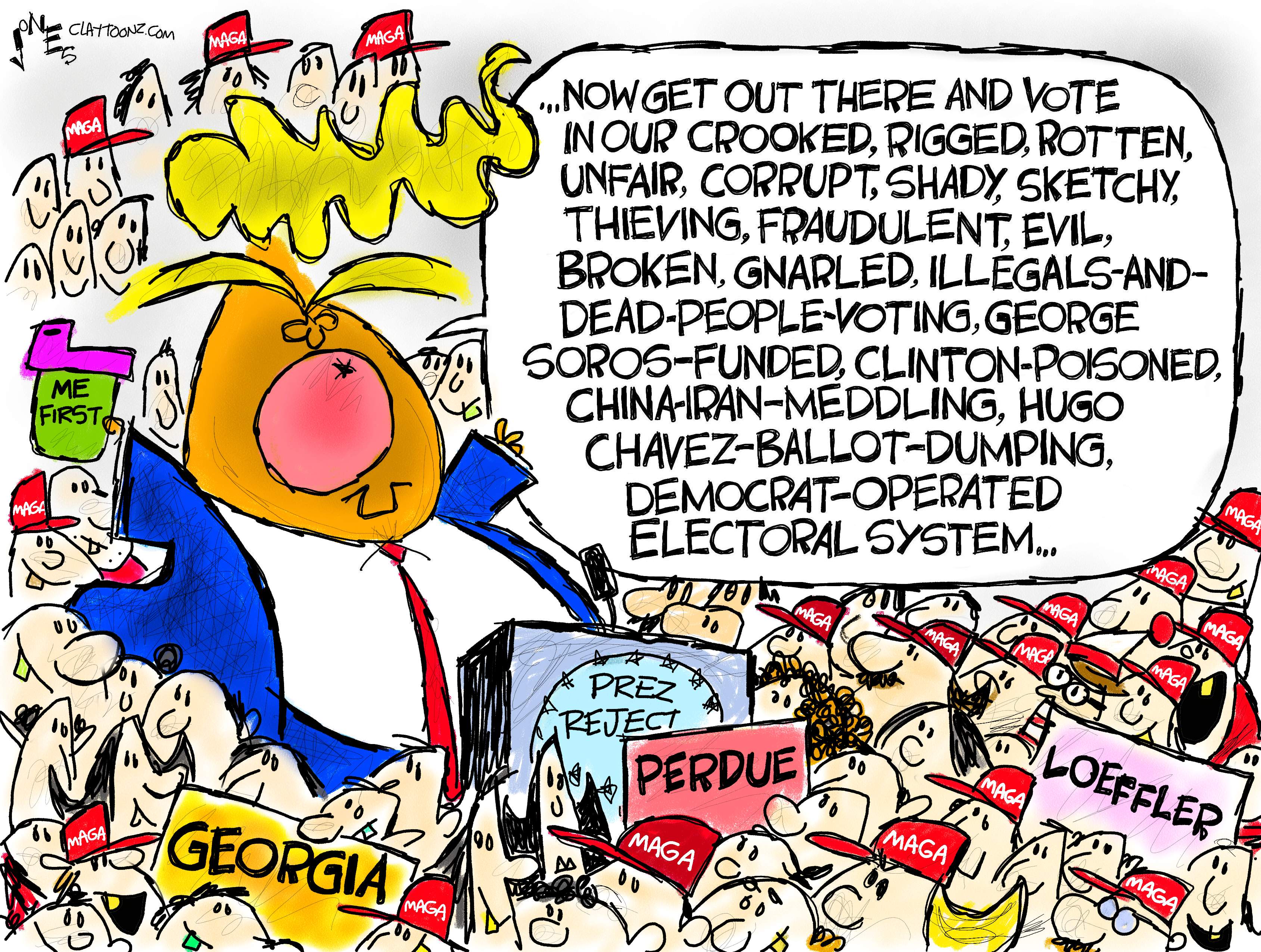 The orange devil went down to Georgia and spread his shit everywhere.

The Republican Party was concerned Donald Trump would be unable to thread the needle of getting out the vote for their two terrible Senate candidates, Long-Neck Loeffler and Chicken Perdue, in Georgia’s upcoming runoff election while also telling his people the vote is rigged and corrupt. He didn’t surprise anyone.

Donald Trump told his people he won the election which is a lie. He told them the vote was corrupt. He attacked their governor, Brian Kemp, who he called last week trying to convince to break the law and give the state to Trump. Don’t worry about breaking the law, governor. Trump can give you a pardon. He might even give you a discount.

Republicans are afraid that if their stupid-ass, ignorant, conspiracy believing fucknut voters believe that top Republicans in the state, the governor and secretary of state, are helping Democrats corrupt the election, then they won’t even bother to vote. Why vote in a system that’s not going to let you win.

And you know what. THEY’RE RIGHT!!!

It’s all a scam people! You can trust me on this because I work for CNN and they tell us everything that you’re hearing about on 4chan and Parler. We hold the information and hide it so the general population won’t figure it out. But yeah, we stole this election.

What we did was, had George Soros fund North Korean boats to bring over fraudulent ballots which were later filled out at the Clinton Foundation headquarters. Then, we stuck them all inside voter machines designed by Hugo Chavez who came back from the grave to help us steal this election so America can become a socialist commie-infested worker’s paradise. Now, we’re going to force the Green New Deal on everyone, raise taxes on the middle class, ban cow farts, and there will be taco trucks on every corner…but they’ll all be vegetarian tacos.

And here’s the best part: Brian Kemp and Georgia secretary of state, Brad Riff-Raff Raffensperger are in on it. We promised them they would not be forced to work in the brand new socialist sugar mines while being whipped by Morlocks.

So yeah, if you’re a Georgia Republican, you might as well not even vote.