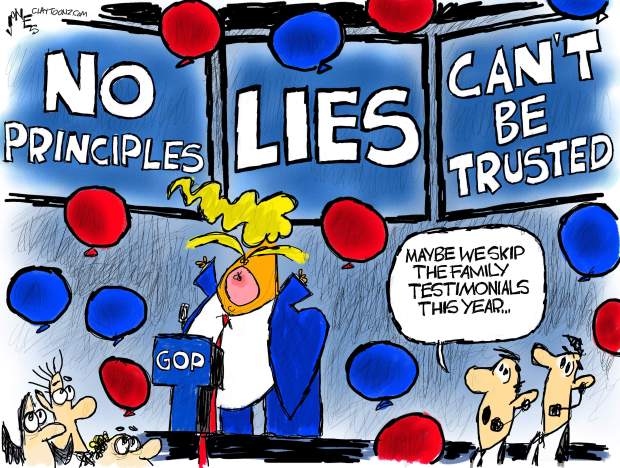 Full disclosure. I too have sisters (two) who don’t like me and will say all sorts of nasty things. Things like, “entitled,” “selfish,” “spoiled,” “wasted my talent,” etc. But in my defense, I’m not the only person in the family they refuse to talk to (in my case, I choose not to talk to them), they’re not federal judges and they’re Trump supporters.

Donald Trump’s older sister is a retired federal judge and she apparently spent about 15 hours shit-talking her brother. What did Maryanne Trump Barry say about her baby bro? He’s a “liar,” “cruel,” “People can’t trust him,” and he’s a “man of no principles.” She also complained about how Donald Trump has treated migrant families and said, “All he wants to do is appeal to his base.” About ripping families apart and throwing babies in jail, she said, “I mean my God, if you were a religious person, you want to help people. Not do this.” She said, “what they’re doing with kids at the border,” and guessed her brother “hasn’t read my immigration opinions” in court cases.

She also said he doesn’t read and she’s apparently the one who told their niece, Mary Trump, that Donald paid someone to take the SATs for him to get into the University of Pennsylvania because he was too stupid to get in on his own.

Last week, more than 70 former Republican national security officials endorsed Biden, saying Trump had engaged in corrupt behavior “that renders him unfit to serve as president.” But hey, don’t take it from them. Take it from his own sister.

The recordings were made by their niece, Mary Trump, who just released a book bashing The Donald, “Too Much and Never Enough: How My Family Created the World’s Most Dangerous Man.” She secretly recorded her aunt, Maryanne Trump Barry, trying to get more information over their inheritance which she felt cheated out of. Being that they’re Trumps, I’m sure she was. Maryanne Trump didn’t know she was being recorded, which was legal in the state of New York.

Maryanne repeated what we’ve all been saying for years. She said, “The change of stories. The lack of preparation. The lying. Holy shit.” Holy shit, indeed.

Donald Trump didn’t attack his older sister but defended himself with, “Every day it’s something else, who cares.” His chief-of-staff however was sent to the Sunday morning talk shows to disparage her along with the niece. Meadows tried to slight her by mentioning she didn’t attend their younger brother’s funeral held at the White House over the weekend. Somehow, an 83-year-old judge didn’t want to be around a lot of no-mask-wearing fucknuts in a covid hot spot.

At their own father’s funeral, Mary Trump claims Donald was the only one who didn’t talk about his father, instead talking about himself, which I’m sure no one finds believable (insert eye roll here). Maryanne Trump told her son afterward not to let any of her siblings speak at her funeral.

These recordings are just in time for the Republican National Convention where Donald will have other family members speak, like his idiot son Donald Trump Jr, who will speak on the first night. Eric and Tiffany will speak on the second night, and his wife, Melania, plans to deliver last week’s speech by Michelle Obama from Jackie Kennedy’s Rose Garden she just destroyed. On the last night, Ivanka will speak despite being a federal employee. With Donald Trump and Melania speaking from the White House, and with Ivanka’s participation, it’ll be hard to deliver a law-and-order platform when you’re breaking the law while delivering that platform.

Donald Trump plans to speak every night of the convention. Again, I have to watch all this shit. Ugh. Did I mention Matt Gaetz and Jim Jordan are speaking tonight? I’m tempted to warm up my oven so I can stick my head in it.

This revelation, that his own sister thinks Donald Trump is cruel, a liar, a phony, and isn’t prepared, won’t hurt him with his base who are people who lie, are cruel, and have no principles (I mentioned Matt Gaetz and Jim Meadows are speaking, right?). People with principles don’t support someone as openly corrupt as Donald Trump. Maryanne Trump said “It’s the phoniness of it all. It’s the phoniness and this cruelty. Donald is cruel.”

Phony and cruel. That’s what his base is voting for.

As for Donald Trump and his sister, he can always say we can’t trust anything she says because she’s a Trump.