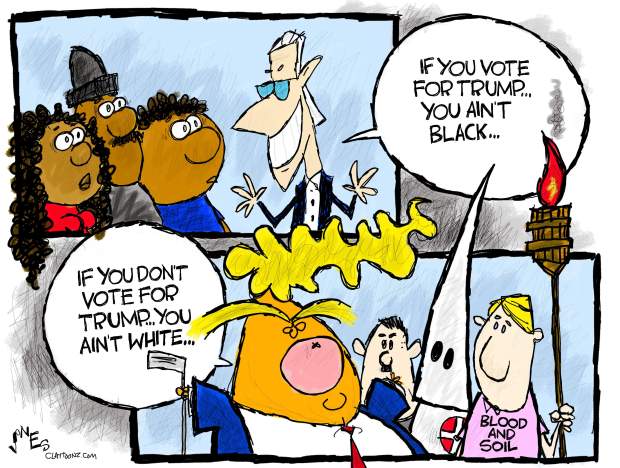 Over this weekend, pro-Trump goons and sycophants left comments underneath my cartoons demanding that I draw on Joe Biden’s gaffe where he said, “You Ain’t black.”

Apparently, some people think my cartoons are supposed to give equal time. Wrong. They think a cartoonist is not supposed to be biased. Wrong. They think a cartoon is supposed to be fair. Super duper wrong. I’m a liberal cartoonist. I hit the targets I believe deserve it and are a threat to the nation, which tend to be Republicans. Occasionally, that does mean I hit a Democrat. I am fiercely independent. I will never be a member of any party or campaign for a candidate. But, I will work to defeat a racist, stupid, dumbass TV reality host that shouldn’t be allowed on the White House tour, less enough living in the place.

Also, this isn’t open mic night where I take requests. Even the people who put money in my tip jar can’t demand I draw a specific cartoon. And I seriously doubt any of the right-wing goons have put anything in my tip jar other than poo and used condoms (I have to hose that thing a lot). But, there are times someone makes a good suggestion for a topic and I will hit it. But be careful what you wish for because you might get exactly what you deserve. So today’s cartoon is dedicated to every fucknut pro-Trump racist who told me to draw on Biden’s gaffe. Here’s to you, hypocrites.

Joe Biden made a huge gaffe. Even as they cringe, nobody is really surprised. Joe Biden says stupid shit. It’s what Joe Biden does. Biden was being interviewed by Charlamagne Tha God last Friday when the host said he might still have more “questions” for the Democratic nominee before election day. Biden replied, “You’ve got more questions? Well, I tell you what, if you have a problem figuring out whether you’re for me or Trump, then you ain’t black.” Ouch. Yikes. Eeks. No, Joe. No.

One of the many differences between Joe Biden and Donald Trump is that Biden can recognize when he said something stupid and instead of doubling-down, he’ll issue an apology. That’s something that goes against everything Donald Trump stands for. Joe Biden admonished himself for being “so cavalier” and said, “No one should have to vote for any party based on their race or religion or background.” Donald Trump still hasn’t apologized for defending tiki-torch Nazis or saying black women in America should go back to where they came from with his “send them back” comments. Nope. He doubled-down on that shit and led “send them back” chants at his hate rallies.

After Biden’s gaffe, the Trump campaign started selling T-Shirts with the hashtag “#youain’tblack” on them with Biden’s name underneath. I read somewhere they even created a website but I haven’t looked for it yet because one time, I went to David Duke’s website and I was in the shower for a week with a brillo pad trying to scrub it off me.

All profits from Trump’s hate shirts will go directly to re-electing Donald Trump and to the Trump Organization for campaign expenses.

The conservative media, like Fox News, went after the mainstream media for not covering it enough. But in the media’s defense, Donald Trump changed the subject.

Shortly after Biden’s remarks, instead of coasting on them and taking the weekend off, Donald Trump had to say something stupid. Something with even more potential for damage than “you ain’t black.” Donald Trump told his supporters to go to church and demanded the nation’s governors to reopen every church in the nation. Donald Trump advocated for worsening this health crisis.

And, instead of going to church himself on Sunday, like he advocated for the rest of the nation, Donald Trump’s morbidly-obese ass was on a golf course. Of course, it was a Trump golf course so he got to charge the Secret Service for golf cart rentals. Donald Trump admonished President Obama for golfing during the Ebola crisis…which killed two people in this country. Donald Trump golfed during the coronavirus crisis which has killed nearly 100,000 people. But, conservatives will focus on “you ain’t black.”

While his campaign was creating T-shirts, websites, and screaming about “you ain’t black,” and his followers were in church, Donald Trump was golfing tweeted a conspiracy theory about MSNBC’s Joe Scarborough being in a murder scandal, retweeted insults about Nancy Pelosi’s teeth, Stacey Abram’s weight, and one that called Hillary Clinton a “skank.” But “you ain’t black’ gets all the conservative outrage.

Joe Biden is NOT a racist. Joe Biden’s biggest offense is that he is taking the black vote for granted. His greatest danger is not generating enthusiasm. That’s not just a problem with black voters. That’s an issue with all voters. And don’t restart you’re crying about Bernie again. This wouldn’t have happened with Bernie? This wouldn’t have happened with my choice either, Kamala Harris. But hey, maybe this gaffe will move Biden to select a vice-presidential candidate like Harris instead of going the safe route with someone like Amy Klobuchar who would appeal to white moderate voters but do little for the black vote. Joe, don’t pick one of the whitest women from one of the whitest states. Please.

Biden will not lose the black vote but his greatest danger is that it will be diminished over comments like, “You ain’t black.” Our greatest danger from that is the re-election of racist Donald Trump who said “Very fine people” marched with Nazis and “Send them back.”