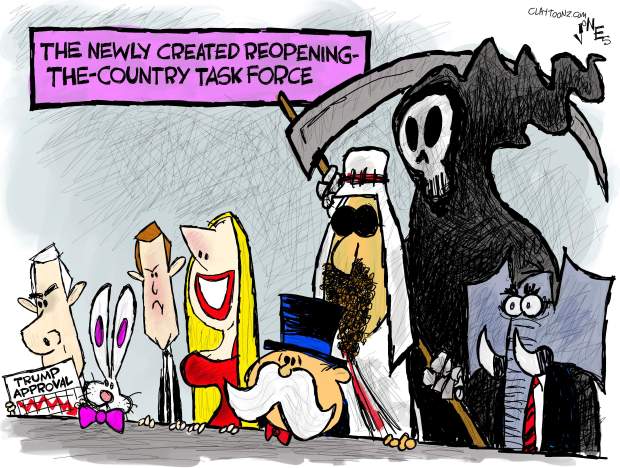 Dr. Anthony Fauci said we could reopen the country in May. Will Dr. Fauci still be working for the government at that time?

Yesterday, Dr. Fauci conceded that a quicker response to the coronavirus pandemic could have saved lives. This morning, Donald Trump retweeted a tweet with a hashtag to “fire Fauci.” Fauci has committed the crime of not just disagreeing with Trump but telling the truth. While firing Fauci will get Trump condemnation and criticism from normal people, his base and Fox News will pick up the mantle that Fauci was disloyal.

On Friday, Donald Trump revealed he was creating a new task for to focus solely on reopening the country. Trump said it would consist of “very good” doctors, business people, and members of Congress, and governors. Thank God he’s not planning to appoint any bad doctors. No word on whether the business people and politicians will be good ones.

During a rambling press conference that lasted over two hours where the creation of the task force was the only new news, Trump said, “This is beyond economic. I call it the ‘opening our country task force’ or ‘opening our country council,’ so we don’t get it confused with the primary White House task force.” The guy can’t even settle on a name but he’s the deciding factor on when the nation reopens? We’re all going to die.

There’s a lot of concern Trump is impatient about restarting the economy. Go read a few posts from right-wingers and Trump cultists and you’ll see the direction is on opening the country now…with great anger that it was ever shut down to begin with. There is deep concern Donald Trump, who is an idiot, will push to reopen the nation too soon, which would be like pouring gasoline on a coronavirus fire.

Donald Trump is the first president in the modern era to lose 3 million jobs a week two weeks in a row. He’s watched the stock market fall. He was slow to react to a virus that may end up killing at least 60,000 Americans. But he wants your ass at Walmart and baseball games.

Trump said the task force will be bipartisan. What does he consider bipartisan? Will he appoint his stupid daughter, Ivanka to the board and say that’s bipartisan because she was a Democrat before being told she had to switch parties to vote for her dad in New York’s Republican primary (she and her two idiot brothers actually missed the deadline and weren’t able to vote for Daddy in the primary)?

Since Trump is creating the task force now, does that mean he’ll say it’s safe to open the nation tomorrow?

Donald Trump was warned about the virus in early January. While he claimed impeachment distracted him, it didn’t stop him from playing golf or holding MAGA rallies. After being warned multiple times, he finally declared a state of emergency on January 31, two days AFTER establishing the White House Coronavirus Task Force.

While that task force has Dr. Fauci, Dr. Deborah Birx, and Surgeon General Jerome Adams, it also has assorted nuts like Mike Pence (who chairs it), Ben Carson, Ken Cuccinelli, Larry Kudlow, and Steve Mnuchin. Behind the scenes, Trump’s idiot son-in-law is running a shadow coronavirus task force, which might also be the reopening-the-country task force. With this group, the only people who are sleeping well at night are Trump cultists who haven’t seen his latest polling numbers…or Joe Biden’s.

The one good piece of information is that Donald Trump does not have the authority, like he believes he does, to order governors to reopen their states. Sure, he has influence and Republican fucknut governors in the south will do whatever he says because unlike Dr. Fauci, they don’t work with facts.

Keep in mind, this is a man who appointed his daughter and her husband as his advisers. He’s put his son-in-law in charge of Middle East peace and immigration. He appointed people to his cabinet like Ben Carson, Betsy DeVos, and Rick Perry. If he ever did own an NFL team, he’d draft Ryan Leaf.

We’re all going to die.