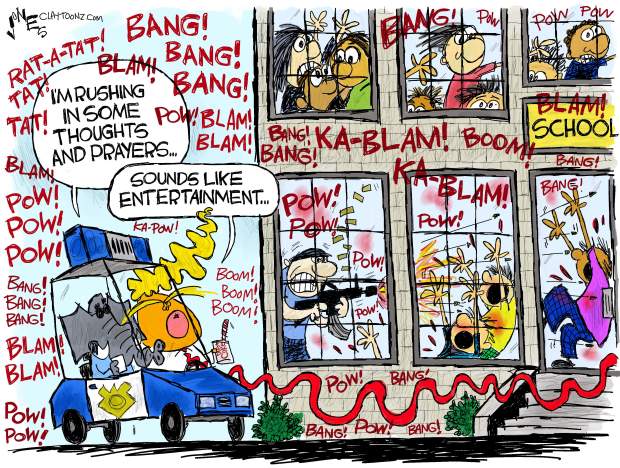 Former Broward County sheriff’s deputy Scot Peterson was arrested and charged yesterday with 11 charges of neglect of a child, culpable negligence and perjury. Why? Because he sat outside Marjory Stoneman Douglas High School in relative safety while a 19-year-old gunman killed 17 and injured 17 others.

An investigation by the Florida Department of Law Enforcement said Peterson didn’t investigate the source of gunshots, retreated during the shooting while victims were still under attack, and directed other law enforcement officers to remain 500 feet away from the building. If he was a Republican, he would have cited bone spurs for his inaction.

While Peterson hung around outside busy not doing anything, over 70 shots were fired by the killer. How many of those shots found a human target? While the shooter is the murderer and responsible for the deaths and injuries, Peterson, who was hired to protect the school, could have probably saved a few lives.

The people who don’t do anything to protect children from mass shootings are culpable in their deaths. That includes Republicans in Congress. That includes the Republican president, who said in an interview with Piers Morgan that people need the AR-15 assault rifle for “entertainment.” As Morgan compared gun deaths in Britain, 35 a year, to the 150 mass shootings in the U.S. in 2019 (so far), Trump compared U.S. gun deaths to stabbings in England. Trump said, “In London, you have stabbings all over. I read an article where everyone is being stabbed.” I’m sure the headline read, “EVERYONE IS BEING STABBED.” The truth is, annual stabbing deaths in England are fewer than 300 a year, much less than gun deaths in the U.S. Trump argued guns in England could stop stabbings.

Trump has a point. We’re too busy in the U.S. shooting each other to bother with stabbings. Nobody goes to a school and stabs 17 people, or to a church or rock concert and stabs 50. In case you haven’t noticed yet, Donald Trump is an idiot.

Fred Guttenberg lost his daughter Jaime in Parkland. He said Peterson deserves the misery coming his way and that he should “rot in Hell.”

Peterson didn’t do the job he swore to do, which was to protect and serve. Trump and Congress are also not doing their jobs. They’re not protecting the citizens of this nation from gun deaths. Their inaction makes them culpable for every single person killed by a gun.

For that, they should all rot in Hell. That would be very entertaining.