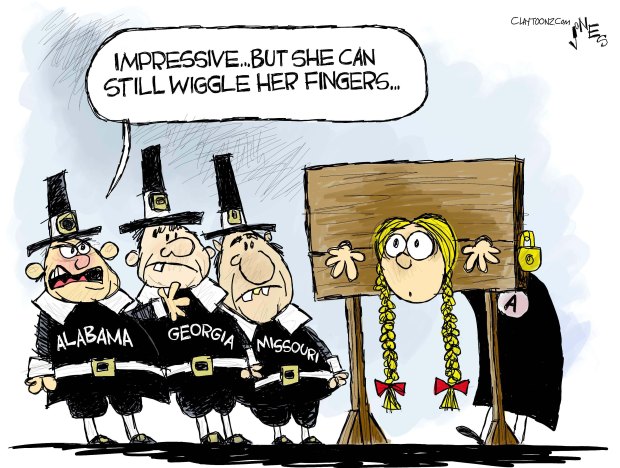 Renting a moving truck from U-Haul to go from Alabama to Connecticut will cost somewhere between $600 to $800, depending on the size truck you need. Why did I look this information up? Because, if you’re in Alabama, you need to get out. As a public service, I’m giving you an idea on the cost.

Why did I pick Connecticut? Because some state officials in Connecticut have offered safe haven to Alabamians who wish to escape their state’s new restrictive abortion laws. Though the law isn’t actually legal yet despite the governor signing it, Alabama seeks to become the most restrictive state in regards to abortion. Connecticut, which has codified abortion, is the most progressive on the subject. Alabama wants to ban abortion entirely, even in the case of rape and incest. If this law becomes an actual law, a woman in Alabama impregnated from rape could face a stiffer prison sentence than her attacker.

But, if you’re from Alabama, even if you’re progressive, you’re probably not going to like Connecticut. It’s expensive and you’ll think Yankees talk funny. It’s also close to Boston, so you’ve been warned.

I do find the invitation extended to Alabamians from Connecticut ridiculous. Even though it seems like it’s Alabamistan, it’s not a foreign country. Alabama is in the same nation as Connecticut. You don’t need an invitation. You’re free to move about the country as you wish. So, if you want to escape Alabama, and I recommend that you do, you can choose whichever state you want. However, there are several states to avoid as they seek to legislate their religion to create women-punishing laws nearly as strict as Alabama’s. Which ones are they? Glad you asked because here we go.

Don’t go to Georgia. It’s a beautiful place and I lived there for three years when I was a teenager. I even went to high school with Amy Carter, daughter of former president Jimmy Carter. They have pecans, peaches, lots of red clay, and the Georgia Bulldogs. It was the home to Martin Luther King Jr. and is the base for Mike Luckovich of the Atlanta Journal-Constitution, a friend of mine and one of the nation’s best political cartoonists. But, in addition to banning abortions after six weeks, the state also suppresses votes from African-Americans. Don’t go to Georgia.

Missouri. They just passed a bill that bans abortions after a heartbeat is detected, and it allows exceptions for medical emergencies but not for pregnancies caused by rape or incest. Plus, it’s Missouri.

Ohio. Another one of those “heartbeat” bills and the governor signed it. On top of that, Cleveland is in Ohio.

Mississippi. I started my career in the state and lived in Batesville, Brookhaven, Gulfport, and Jackson. The state has given us some of America’s greatest authors from Eudora Welty (my college was across the street from her house. I never saw her), Willie Morris, John Grisham, and of course, William Faulkner. They have the best barbecue and a new abortion bill that they call, wait for it…the “heartbeat” bill.

Louisiana, where I spent the majority of my youth against my will. “Heartbeat” bill.

Today, a trial is set to begin in a lawsuit filed by women’s health groups seeking to overturn restrictions on abortion providers in Virginia, my state. One of those restrictions is that a woman must get an ultrasound before an abortion. I’m surprised they don’t make her name the fetus first.

These laws are not about life. They’re about control and religious fundamentalism. The governor of Alabama made that clear when she said the law “stands as a powerful testament to Alabamians’ deeply held belief that every life is precious and that every life is a sacred gift from God.” These people don’t even believe in separation of church and state. They don’t believe in the Constitution. These lawmakers are pushing the issue hoping their state is the one that finally gets the Supreme Court to strike down Roe v. Wade.

This is a war on women. Make no mistake about it. If they actually succeed in banning abortion nationwide, what will they go after next? Remember how elections have consequences? Two of those consequences are named “Neil Gorsuch” and “Brett Kavanaugh.” Liberals need to vote with SCOTUS in mind, just like conservatives do.

If conservatives, Republicans, religious yahoos, and Trump cultists get their way, moving to Connecticut or any progressive state won’t be an escape for anyone. It’s time to stop running. It’s time to take a stand. We have to stop allowing these people from legislating their morality onto the rest of us.

Chains or change. It’s up to you.