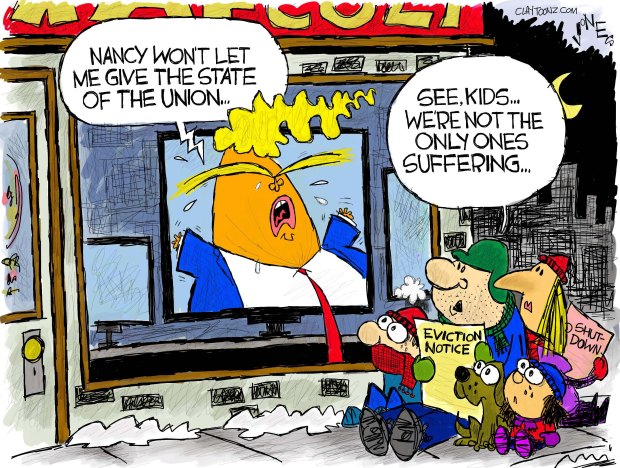 Speaker of the House, Nancy Pelosi has officially canceled Donald Trump giving a State of the Union address before Congress. She sent a letter using language Trump can understand. Reportedly, it said “nyet.”

Trump intends to continue the government shutdown indefinitely as the White House is doing a study on how much damage will be inflicted on specific programs if it continues into March. We’re not even into February yet.

Trump believes the polls will shift in his direction and the public will turn their blame and anger on the Democrats for the shutdown, despite his boast of owning it before it started. I’m not sure the public will blame the Democrats, as Trump’s poll numbers have sunk to 34% and Pelosi is right under 50%.

Keep in mind, after over a decade of Republicans gaslighting the public and casting the Speaker as the Devil incarnate from liberal San Francisco, her numbers are always low…and now she’s scoring higher than Trump. If Trump is at 34%, then where’s flaming bags of dog shit, 35%?

Trump says Pelosi is afraid of hearing the truth during the State of the Union, says the guy afraid of Michael Cohen testifying. If he was to speak the truth, I don’t think any Democrat would be afraid of hearing him say, “Thanks to me, the state of our union is a flaming bag of dog shit.”

The state of our union is a burning bag of crap because this is what happens when you elect an incompetent, stupid, idiotic, narcissist who doesn’t just put his personal interests before the nation, but also his fragile thin ego.  This idiot couldn’t get funding for his racist, medieval vanity project from Republicans, so now he’s demanding it from Democrats. And the bigger idiots, the people who voted for him, have forgotten they were promised Mexico is going to pay for the wall, and they’re now upset that Democrats won’t force them to pay for it.

Trump claims he can relate to the 800,000 federal workers who have been affected by the shutdown and are about miss their second paycheck, thus being unable to pay their bills with many facing evictions. They have larger problems to deal with than not being able to give a speech where they want.

The empathy runs through the Trump family, as Lara Trump, wife of idiot son number two, said the shutdown is a “little bit of pain” for federal workers, but future generations will “thank” them “for their sacrifice.”

I believe encouragement to “hang in there” from ivory towers will fall on deaf ears of those out on the street. Nowhere on those lists of part time jobs issued by federal agencies for furloughed workers did I see “marry rich asshole.”

Donald Trump gave in to Pelosi on the State of the Union, announcing his surrender last night on Twitter. My hope is he develops a taste for having his ass handed to him by a woman who is much smarter and more talented than he is. He’s not in Pelosi’s league.

Trump isn’t used to being told no by anyone. Perhaps hearing it now and learning to lose over stupid problems he created will teach him to accept losing in the future. Even though losing the shutdown fight will prove to everyone that Trump manufactured the crisis and wasted everyone’s time over his ego, he needs to go ahead and lose for the benefit of the nation. There are bigger problems in this nation than Trump’s bruised ego.

Hopefully, Donald Trump accepts with dignity losing in 2020, quite possibly having his ass handed to him again by a woman, but then again…I couldn’t give a flaming bag of dog shit how he feels about it.