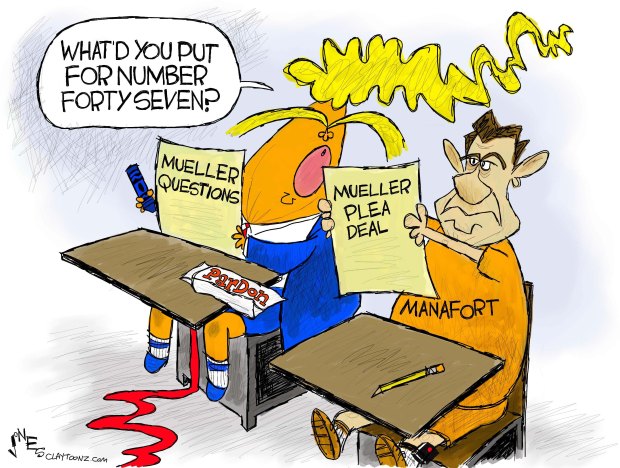 As you read about Paul Manafort’s plea deal being rescinded by Special Counsel Robert Mueller, keep in mind what landed him in jail before his convictions. Manafort was out on bail which he violated by obstructing justice and tampering with witnesses.

Mueller’s office says Manafort violated his plea agreement by repeatedly lying. You wonder why did he do that? Is he being manipulative? Is there further information he’s afraid will get him in deeper trouble? Is he still protecting Trump and why? Or, can he just not help lying because he’s always been a liar? The answer is probably a combination of each of those questions.

Manafort and Donald Trump are con men. Even though they deal in millions and billions instead of mere thousands, don’t give them another classification. They are lying con men and grifters. They are skeezy, sleazy, backstabbing, cheaters who will sell you, the nation, and their own family out for a couple of bucks.

Manafort made his deal with Mueller, so he would only get a few years in prison, instead of dying there, as he’s 69-years-old. Last August, he was convicted on five counts of tax fraud, one count of failing to disclose his foreign bank accounts, and two counts of bank fraud (and this was with a judge hostile to the Special Counsel). Facing an additional trial in Washington and charges of conspiracy to defraud the United States, money laundering, failing to register as a foreign lobbyist, making false statements to investigators, and witness tampering, Manafort struck a deal and pleaded guilty to witness tampering and defrauding the United States. He also surrendered $22 million in cash and property, which means this Special Counsel investigation has actually made the country money.

He was probably thinking that even with a reduced sentence, no prison time is better than any, Manafort started cheating. He was lying and withholding information from the Special Counsel and even leaking details of the investigation to Donald Trump’s lawyers. Not only does Trump have an inside man at the head of the Justice Department, he had a rat in the investigation.

Trump has stated that he feels bad for Manafort, and he probably wouldn’t be in so much legal trouble if he had never worked for his campaign. Basically, Trump, the rule-of-law president, feels bad that Manafort’s lawbreaking was exposed. Now, he’s publicly dangling a pardon in front of Manafort telling The New York Post, “why would I take it off the table?”

Trump is obstructing justice and engaging in witness tampering. While a president does have the power to pardon anyone he wants, he doesn’t have the right to bribe, which is what a pardon in this case is. He’s publicly telling Manafort that it’s on the table.

Trump and Manafort’s lawyers are probably in trouble too for obstruction of justice, and this includes Rudy Giuliani.

Trump has refused to sit down with the Special Counsel and instead, answered written questions. According to reports, two of his answers are that Roger Stone did not tell him about WikiLeaks, nor was he told about the 2016 Trump Tower meeting between his son, campaign officials and a Russian lawyer promising dirt on Hillary Clinton. Who wants to bet that Mueller already knows the answers to these questions? Who wants to place a higher wager on Trump telling the truth?

Like Manafort, Donald Trump can’t tell the truth under any circumstance. He believes he lives by a higher standard than everyone else and can’t be punished for anything he says or does. Hopefully, very soon, he’ll learn that lying to the Special Counsel isn’t the same as lying to the press or in a tweet.

Trump answered Mueller’s questions with help from his lawyers, who are the same lawyers Manafort was leaking information to. Is there any possibility the answers weren’t coordinated with what Manafort was telling Mueller?

Hopefully for all the shitweasels like Trump Jr, Roger Stone, Jerome Corsi, Julian Assange, Manafort, Giuliani, and the 45th president of the United States, orange will be the new orange.