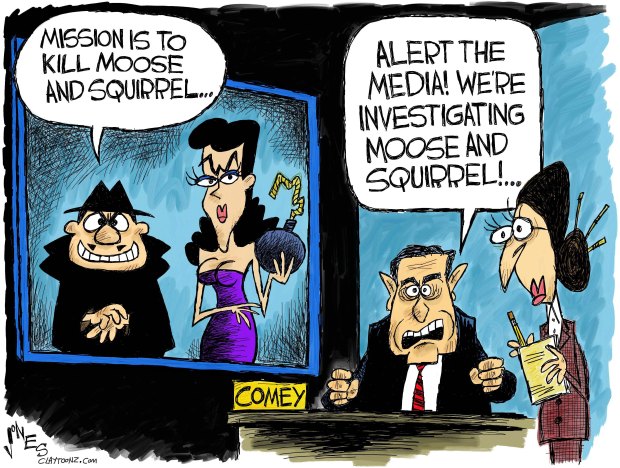 The only thing surprising about a weiner disrupting Hillary Clinton’s campaign in the final week is that it doesn’t belong to Bill.

The FBI is NOT supposed to involve themselves in elections. That’s the CIA’s job to do in other nations. The bureau swears they’re not despite director, and Republican, Jim Comey issuing a letter within 11 days of the election stating they’re looking into newly discovered emails related to its investigation of Hillary Clinton. They didn’t have a warrant to actually look at the emails. They don’t know what’s in them. They weren’t sent from Clinton or on any device owned by her. But hey, everybody. We want you to know there could possibly, maybe, I don’t know, perhaps, possibly be something there. Maybe it’s details of her selling weapons to Iran like Reagan did. Maybe it’s just coupons for pantsuits.

They don’t want to become involved in this election or give any impression they’re trying to tilt it in one direction or another, so they’re not going to tell us anymore about the emails before election day. Nope. Don’t want to be involved.

So I’m sure it wasn’t any meddling when the FBI leaked information that they don’t see any cooperation between Donald Trump and Russia in this election. None at all despite Donald Trump publicly asking the Russians to leak Clinton’s emails, or that his former campaign director collected millions of dollars from Putin puppets in Ukraine, or the fact that Russia is hacking into the Clinton campaign and the Democratic Party’s computers. I’m sure the Russians just want to mess up our entire electoral process because look at all the emails they’ve released from the Trump campaign…no wait. They’re not doing that. I would not be surprised after this election that a bombshell comes out about Trump and Russia’s involvement. I just hope for Vladimir’s sake they got paid up front because right now there’s some pissed-off stiffed pollsters out there.

Again, they don’t want to be involved in this election but hey, look at these documents concerning Bill Clinton’s pardon of financier Marc Rich who fled the country after he was charged with tax evasion. Look at it now as there’s only a week left in this election.

The FBi released the documents Monday but just in case nobody noticed, they tweeted out a statement from one of their Twitter accounts they haven’t used in over a year. In a statement, the FBI said that any material requested three or more times under the Freedom of Information Act is automatically made available to the public online on a “first in, first out basis.” I’m not sure if there’s any legal requirements to announce it on Twitter.

You need three requests to the FBI? OK, I have three. How about shut up, and shut up, and oh yeah…shut the hell up.

Since the FBI is so busy will they reveal anything concerning Donald Trump’s housing segregation from the 1970s? How about something on Trump’s fraud lawsuit over his fake university which is going to trial after the election? Or better yet, how about some juicy tidbits from his upcoming trial where he’s accused of raping a 13-year-old girl? How about any information from the over 70 lawsuits Cheeto Oompa Loompa is facing? No? Can I make a request?

The IRS won’t even release anything on Trump’s taxes or even confirm he’s being audited like he claims. Does he pay taxes? Was it legal? Does he have financial ties to Russia? Does he give anything to charity? I’m a hell of a lot more concerned about who Trump is indebted to than I am with how many of Hillary’s emails had a “C” on them.

Trump keeps screaming that Hillary is crooked and these emails definitely prove she should be in prison, even though he has no idea what’s in them. Meanwhile we’re supposed to take his word that he’s a charitable guy (he’s not) or that there’s nothing fishy in his tax returns.  Since he can make statements about what’s in a document he hasn’t seen then can I state that Trump’s tax returns definitely contain details of his running a brothel out of Trump Tower for teenage hookers? How about they contain write-offs for bulk purchases of Viagra, ass cream, and teeny tiny condoms?

If you’re more concerned that Hillary Clinton sent emails than any of the vast array of Trump’s scandals then I only have one question for you: