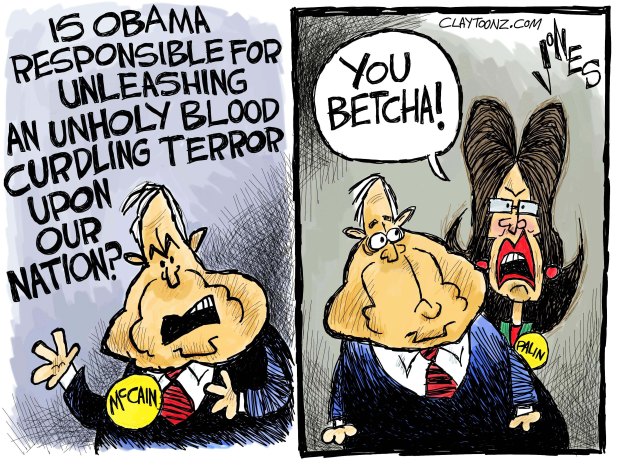 On Thursday Senator John McCain blamed President Obama for creating ISIS and having a hand in the attack in Orlando. I guess he forgot about that entire episode where President Bush invaded the wrong country, destabilizing it and creating a world class recruitment center and haven for terrorists. It must have slipped his mind.

After accusing the president of treason and coming off as ridiculous as Donald Trump, McCain attempted to clarify his statement. He said his intention was to blame Obama’s policies, not as if Obama was personally cutting off journalists’ heads in the desert outside Raqqa.

McCain is in a tough primary race for his senate seat in Arizona. Now may not be the best time for him to make stupid statements. To retain his seat he needs to distance himself as far as possible from Donald Trump, not mimic him. What’s McCain’s next move, a photo op with a taco bowl while accusing himself of not being a war hero?

Before McCain picked a running mate in his failed presidential attempt in 2008, nobody outside Alaska has ever heard of Sarah Palin. Since that time we’ve suffered eight years of a tidal wave of stupidity that even Donald Trump has had trouble duplicating. Thanks, Senator. It’s the stupid that keeps on giving.

Speaking of stupid, Sarah Palin also had some criticism of President Obama this week. She probably does that every week but this one was noticeable. She said the president is a “special kind of stupid” over his efforts toward gun control. Seriously. Miss Right Winger Bitter Clinger has called someone else stupid. Next, her daughter will start lecturing about abstinence.