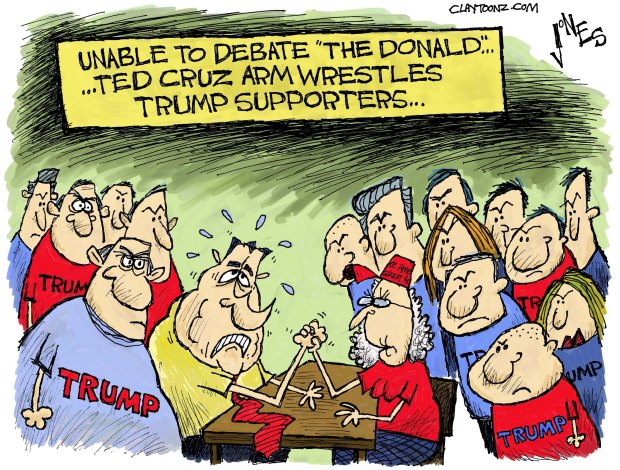 A child yelled at Ted Cruz during one of his rallies, “you suck!”. Ted attempted to talk to the child and said that children speaking like that in his house would receive a spanking. The audience wildly applauded the spanking suggestion. What is it with spanking and public bathrooms that get Republicans so excited?

Someone really smart once said “it’s difficult to win an argument with a smart person and damn near impossible with an idiot.” I’m paraphrasing but you get the idea. That’s a lesson I haven’t learned and apparently, neither has Ted Cruz.

Cruz took it upon himself to debate a group of Trump supporters, whose style of arguing mostly consisted of screaming “Lyin’ Ted” to Cruz’s face. It reminded me of every time I attempted to debate with a conservative. You can’t win.

Ted has a speaking style where he pauses in mid sentence. That only encouraged the Trumpsters he was trying to reason with as at one point Ted said “the question is often asked…” he paused and then one of the hecklers interjected to finish his sentence with “are you Canadian.” Good stuff.

Ted Cruz is a good debater. He was lauded for it in college and on the campaign trail. Until he met Trump, all of his previous debating experience was probably with reasonable people.

You might be able to have a discussion and sway the mind of a casual Trump supporter, but not the fully committed (those who should be committed) who wear the gear and attend a Cruz rally to heckle.

I’ve done enough Cruz cartoons over the past week. Hopefully he’s not fully knocked out of the race Tuesday night, which would make me draw another. I’m sure Trump will say something “interesting” tomorrow night.