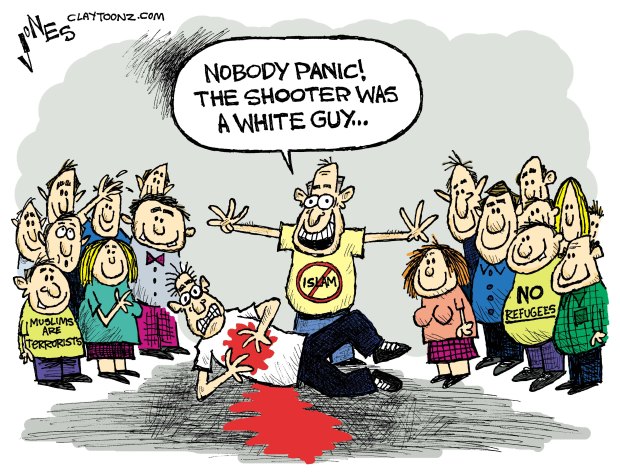 It’s hard to draw a cartoon on something that’s already a cartoon. A state legislature in Texas, who’s a gun advocate and has an A plus rating from the NRA, says we shouldn’t allow refugees into this country because guns are so easy to buy here. You can’t make up this kind of irony.

That’s a new one in the argument against allowing Syrian refugees into this country. It falls into line with conservatives saying we can’t afford benefits for the refugees. Conservatives are fighting against benefits to poor people, minorities and women who have been born here. It’s also a little bizarre that the pro-life crowd cares about a fetus, but not a child fleeing a civil war…but then again, they also don’t care about American children shot in their classrooms. Conservatives are cowards.

Back to the argument about terrorist sneaking in with refugees:

In fact, over 2,000 on the terrorist watch list has legally purchased a gun in the past decade. You can thank the NRA for that.

Conservatives like to point out that the Boston Bombing Brothers were refugees. Not true. Their family sought asylum after arriving in the U.S. on tourist visas. The brothers were children at the time. Does that mean nobody should be allowed entry into this country?

If a Muslim shoots someone in this country there are immediate fears of terrorism. If a black man kills a white man we look for gang violence. If a white guy shoots up a church we wonder where did that boy go wrong. The odds are that if you’re murdered the perpetrator will be a member of your own race.

Now don’t you feel like you need to stop worrying about Syrian refugees and return your neighbor’s lawnmower?