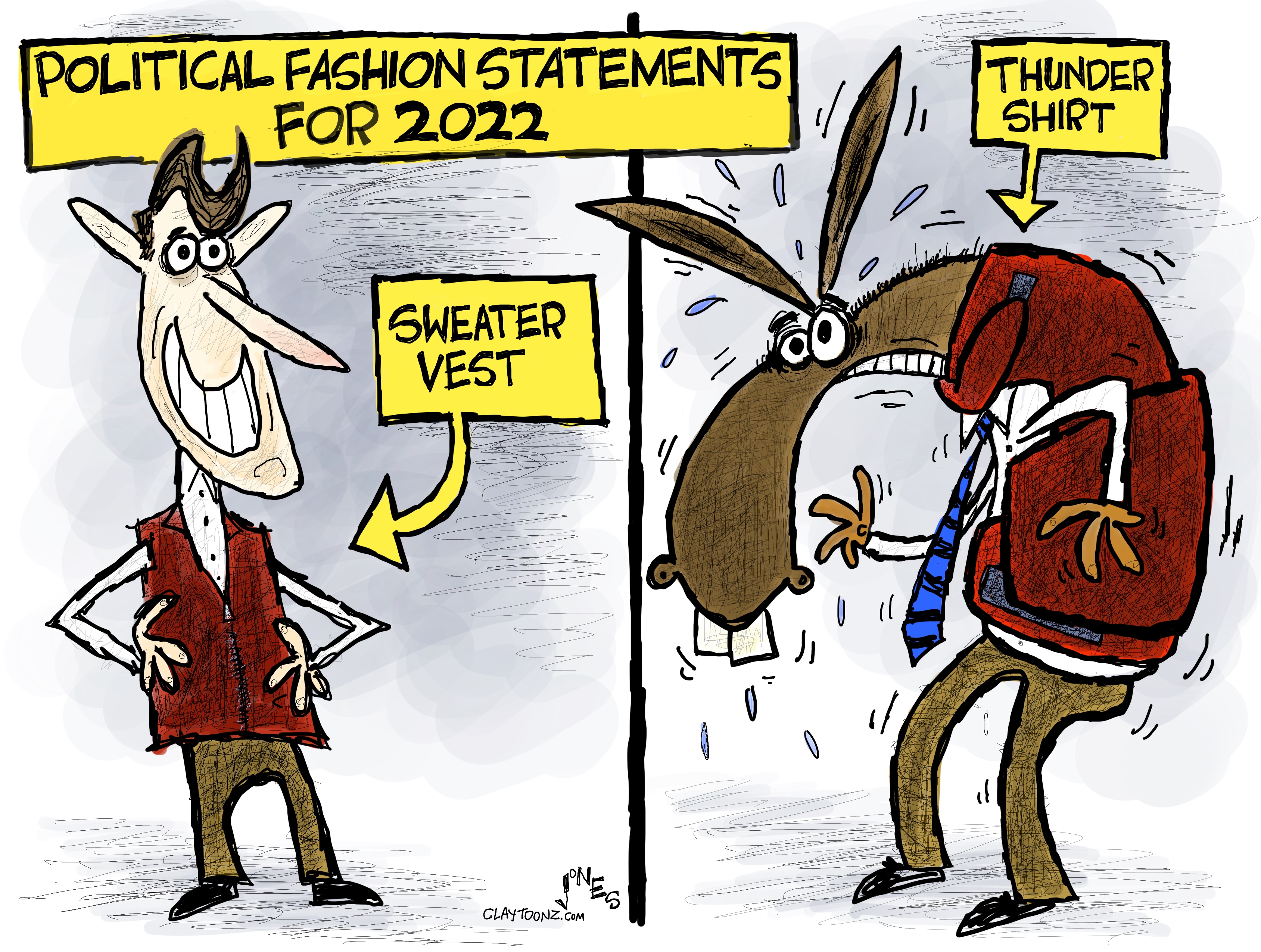 For Republicans, the fashion trend for 2022 will be fewer MAGA hats and more sweater vests while keeping Donald Trump at bay. The trend will be to push racist Trumpian policies while attempting to appear less racist. There will be less screaming that Mexico is sending rapists and murderers and more warnings of Critical Race Theory, neither of which is actually happening. Also fashionable for Republicans is the phrase, “Let’s go Brandon” which replaces their other popular phrases, “Hang Mike Pence,” and “Jews will not replace us.”

For Democrats, the new fashion trend should be Thunder Shirts, which by the way, don’t work on beagles. Sure, the beagle will let you put it on him without a struggle, but for him, it’s just a comfy shirt. It doesn’t prevent them from being afraid of thunder and it definitely doesn’t stop them from barking. Shock collars don’t stop beagles from barking either which makes it extra cruel to leave them on the dog because they will still shock them. Also, those devices that emit a high-frequency sound when triggered by a bark, yeah, they don’t work on beagles either. What does work on beagles is cheese. Cheese doesn’t really stop them from barking, but they really like cheese.

First, for them to work on Democrats, they have to put the Thunder Shirts on, and they’re not going to give them a try unless they’re afraid. Are they afraid? They should be. Democrats should be trembling in fear after their defeat in Virginia and the close call in New Jersey. What happened in Virginia was huge and a major disappointment. What happened in New Jersey should have the Democratic Party purchasing Thunder Shirts in bulk.

If this week’s gubernatorial elections in Virginia and New Jersey are indicators for the 2022 midterm elections, where 34 U.S. Senate seats will be up for grabs, every House seat will be contested, and 36 governor races will be held, the Democrats are in trouble. Not only was 2021 not great for Democrats, but they didn’t as well as they hoped in 2020. Sure, Democrats took the Senate and White House, but they lost seats in the House. In Georgia, more voters went for Republican House candidates than voted for Donald Trump. A lot of people who hate Donald Trump will still vote for other Republicans.

It’s not just the Democrats being unable to pass significant legislation or failing to deliver on their promises of 2020 that’s endangering them. The other factor is the trends of voters.

The trend for voters is that they have bad memories. They don’t remember the insurrection which was only ten months ago. They don’t remember the stupidity of the Trump administration. In Virginia, they don’t remember that the last Republican governor liked gift bags a little too much. Voters have a trend of forgetting where a lot of our current problems that hurting our president in the polls were created by Donald Trump. COVID, inflation, and the supply-chain crisis all began under Trump. And rising gas prices is an international problem. Do you think there’s someone at a petrol station in England right now saying, “Blimey that bugger Joe Biden for these high gas prices!”? No?

Voters are forgetting the spread of the Big Lie and how Republicans are undermining democracy. Well, they’re forgetting or they’ve become desensitized.

There is another trend for voters and it’s not new. Voters are stupid. Every Republican president, every Republican House, and every Republican Senate runs up the debt, gives huge tax cuts to the rich, and sells trickle-down, which hasn’t worked in 40 years. Voters throw them out and a few years later, they put them back in. It’s after they’re back in power that voters realize, “Oh yeah. These guys suck.”

Democrats are not great, but they’re better than Republicans. Republicans are stupid, racist, and corrupt. Democrats are mostly just stupid. But right now, Democrats need to smarten up, get their act together, pass some significant legislation, and save voters from themselves, because, unlike beagles, humans will vote against free cheese.

Democrats better hear the thunder, which always arrives before the storm. The thunder was last Tuesday. The storm is 2022.

Notes on my book, Tales From The Trumpster Fire: There are TWENTY copies of my book in stock, which go for $45.00 each, signed. Also, I have copies of my first book from 1997, Knee-Deep in Mississippi available for $20.00.