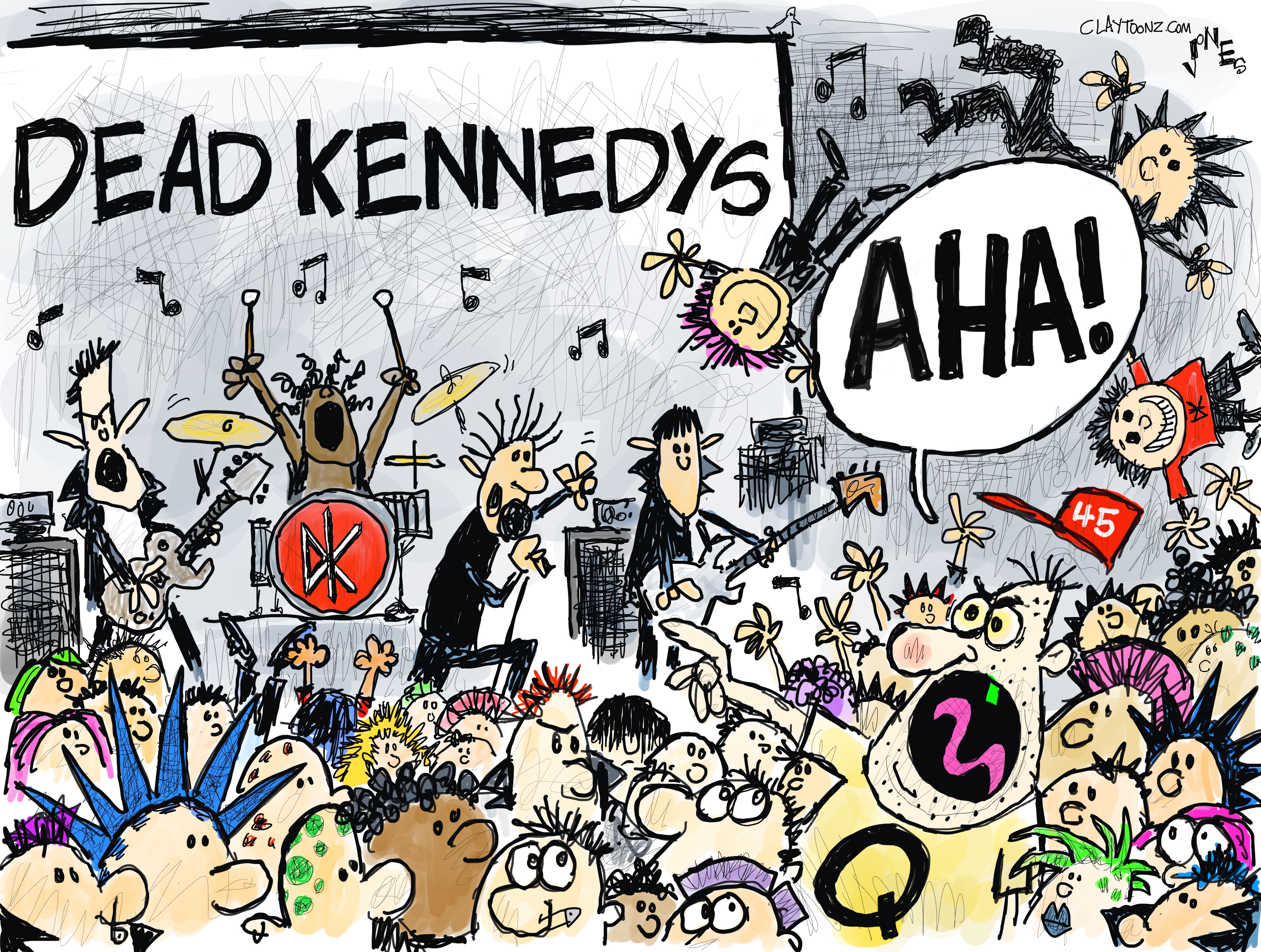 I’m kinda hard to offend, but it’s possible. The kind of things that offend me is bullshit, “fake” news, and conspiracy theories. I can also be offended while also amused by a conservative’s lack of any sense of irony. I was offended this morning when a couple of readers at GoComics accused me of not doing research with my “Let’s go Brandon” cartoon. They pointed out that I had Biden at a world summit with Putin, but Putin didn’t go to the climate summit. I know that which is why I didn’t put the name of the summit in the cartoon. It’s called “creative license.” But what offended me is being accused of not researching when I’m pretty confident I do it more than most cartoonists.

I believe most of my colleagues research before they draw. When I say “research,” I mean they actually read an article on the subject which often leads to reading another article and then another, in addition to watching cable news coverage of the subject. I also get the impression some of my colleagues only read the headlines, and I’m not just talking about conservatives here. There’s a couple of guys out there who I’m embarrassed for their shoddiness and lack of knowledge on the issues. And then, there are the cartoonists who get all their information ONLY from conservative media. Today, for example, several goose-stepping cartoonists are doing cartoons on Biden paying immigrants $450, which shows they’re only reading Breitbart, Daily Caller, and being told what to draw by Tucker.

This is my way of telling you that I researched the Dead Kennedys. But, I didn’t research enough.

I’m a huge music fan. I play guitar. I write songs (or at least I used to). I’ve been in bands and I’ve even made an album. I own more guitars than I need but not as many as I want. I love music. I rarely draw a cartoon without some music playing. I love music.

There’s diversity in my taste. I love the Beatles and the Stones (Beatles are better). I like some Elvis but am more intrigued by the cult of Elvis than the music he didn’t write. I like Creedence. I loved Kiss when I was a kid, but now realize they’re not a good band and can barely tolerate them today. I like some classic rock and 80s hair metal but I only listen to it now and then as after I do listen to it, I don’t want to hear it again for a long time. I’ve heard enough Lynyrd Skynyrd and Led Zepellin that I never have to listen to either ever again. I don’t like country music but there are a few country songs I do like. I like some rap. I think Eminem, Ludicrous, and Jay-Z are geniuses. When I listen to Taylor Swift’s Folklore album, I think she must have an IQ of 1,000. But, I never really got into punk rock.

I like punk rock-inspired stuff, like the Pixies and Nirvana. I love the entire early-90s Seattle sound, but Pearl Jam is NOT punk rock. For me, the true predecessors to punk rock are The Kinks and very early Who (“I can’t explain” is punk, baby. So is “Lola.” C’mon he’s singing about a transvestite in 1970). Most of the music I like has pop in it. I like a catchy riff and a hook. That’s why I never really got into bands like the Dead Kennedys. While the Ramones and The Clash have hooks, which are poppy, DK does not. Nirvana is full of pop and one of my very favorite bands, though I never have to listen to “Smells like Teen Spirit” ever again. By the way, the Grateful Dead and Phish SUCK!!!

Sorry, I did it again. I took a while to get the major point. The point is, I researched this cartoon. I have always been familiar with DK, as in, I knew they existed. I knew they were from the 80s. I could recognize the logo, but I didn’t know much about them. So, I researched, mostly to see if they are still around. They are but not in the original formation.

By the way, Quiet Riot is touring again, with only one original member. That’s not Quiet Riot. That’s a cover band. So, how many original members are left in the Dead Kennedys. I don’t know. I pretty much stopped reading after I learned they are from California, still together, and have a black drummer. Since I drew it, I’m so glad I looked that up. But I didn’t look up any names. So when a reader on Facebook commented on this cartoon, “Jello would approve,” I blew my punk rock street cred by asking, “What?”

Jello Biafra is the former lead singer and a founding member of the Dead Kennedys. See? Another band touring without its original lead singer. I did not know that. So OK, build my gallows high. I don’t know a lot about some iconic punk bands. However, I have always believed, even without listening to them beyond the point of realizing I don’t like their music, that the name “Dead Kennedys,” while offensive (as it should be), is one of the greatest band names ever. Punk to me is like bluegrass. I can appreciate it without actually liking it. You really shouldn’t have street cred for liking horrible music.

I like the ethos of punk rock but I don’t like music that’s just “bam bam bam bam.” I don’t get a lot out of that but I do appreciate that playing fast takes a lot of skill for a band to perfect. If the Clash is punk, then I like punk…somewhat. The Clash is overrated. How in the hell is “Rock the Casbah” a punk song? Mostly, they bore me. The Ramones only have about three good songs. I have a friend who was in a slightly famous punk band in the 80s and 90s, and every time I hear him sing, I know that’s not his real voice. He sings in some sort of fake British-inspired accent which makes him come off as a tool. He even speaks in it between songs. That doesn’t kick ass to me. Soundgarden kicks ass.

Often, it seems to me that the punk label is only used as an excuse for the band not being able to play their instruments.

When I kinda rebelled at The Free Lance-Star (liberal cartoonist at a conservative newspaper, editor tried to fire me, I was on probation, got screamed at often, and while being paid to express myself, was told not to really express myself), I wanted my cartoons to kinda be the punk rock of political cartooning. Don’t laugh. I realize I’m not there, but I’m not the Nickelback of cartooning either (but I know who is). I think I’m more Seattle and underground New York (between Soundgarden and the Yeah Yeah Yeahs). If my cartoons were music, they’d only have three chords but a lot of change-ups. There would be breaks and restarts that catch you off guard. There would be angry political statements in the lyrics. And, they wouldn’t be nearly as successful as other cartoons, but the followers (my readers) would have to be unique to appreciate them. This is why I’m not Nirvana. They were successful. Basically, I am recording in my garage.

But, what is this cartoon about? It’s about Qanon, the cult that pushes stupid conspiracy theories like there’s a deep state of satanic worshipping baby eaters. Q was behind the Pizzagate shit. They’re big advocates of the Big Lie with a bunch of them being a part of the Trump insurrection. They’re a racist group of idiots and believe Trump will be reinstated. A lot of them believe Trump will be reinstated and make John F Kennedy Jr his vice-president.

Right now, you’re probably thinking, “Hasn’t JFK Jr been dead for the past two decades?” Yes. JFK Jr died in 1999. He’s still dead. But the Q cult, which the FBI has labeled a “terrorist threat,” gathered in Dallas, where his father was assassinated in 1963, to wait for his return.

These motherfuckers were literally waiting on the Great Pumpkin. It’s really getting hard to cartoon this shit. I imagine if waiting for JFK Jr to arrive, and instead, all they got was Don Jr, that the crowd would be as disappointed as Sally when instead of the Great Pumpkin, all she got to see was a beagle. Though, I hate to compare a beagle to Don Jr. No, Don Jr wasn’t there…just in my imagination.

The Qnuts thought JFK Jr was going to show up at 12:30 PM on November 2 (I don’t know why that date was because he died on November 22. See? I research). At that time, they all recited the Pledge of Allegiance while decked out in all sorts of Trump merchandise, which you can find available on the Trump store website. Do you need a box of six pencils for $20.00? No? Why do you hate America?

Spoiler alert: JRK Jr did not show up.

The crowd waited for an hour because no one knew if he was just going to magically appear, come down from the heavens, or arrive in an Uber. Maybe he was stuck in traffic. He probably wouldn’t want to take a plane (too soon?). Some in the crowd waited and waited, but it eventually drifted away. But, maybe there are some still there. Has anyone checked on Linus?

Don’t lose faith in Qanon and its ability to invent new conspiracy theories. They had a backup premonition. JFK Jr would appear later that night…at a Rolling Stones concert. If you were going to make a stupid crazy prediction involving the deceased showing up at a Stones concert, why not predict Charlie Watts is back on the skins? If JFK Jr was going to show up at a concert, I think Dead Kennedys would be more appropriate. I did mention that Jello has been replaced.

Jared Holt, who researches domestic extremism for the Atlantic Council’s Digital Forensic Research Lab, said, “Even though this event is ripe for mockery, and I think people should allow themselves to laugh, I think we need to reconcile with the fact that hundreds of people turn out for a celebrity who has been dead for two decades.

“What drove them out to the streets is a kind of a representation of a broader sickness.”

That’s the danger. If you’re so far gone into the sickness to travel across the country to wait for dead celebrities to show up…and serve Donald Trump, then you’re sick enough to try to overthrow the government to install a fascist cult leader as dictator. You may even be sick enough to kill.

But believing JFK Jr is going to arrive is just as sick as believing Donald Trump won the election, that it was stolen from him, and that he will be reinstated.

Holt says we should recognize how dangerous these people are, but we should still mock them. That’s what I do.