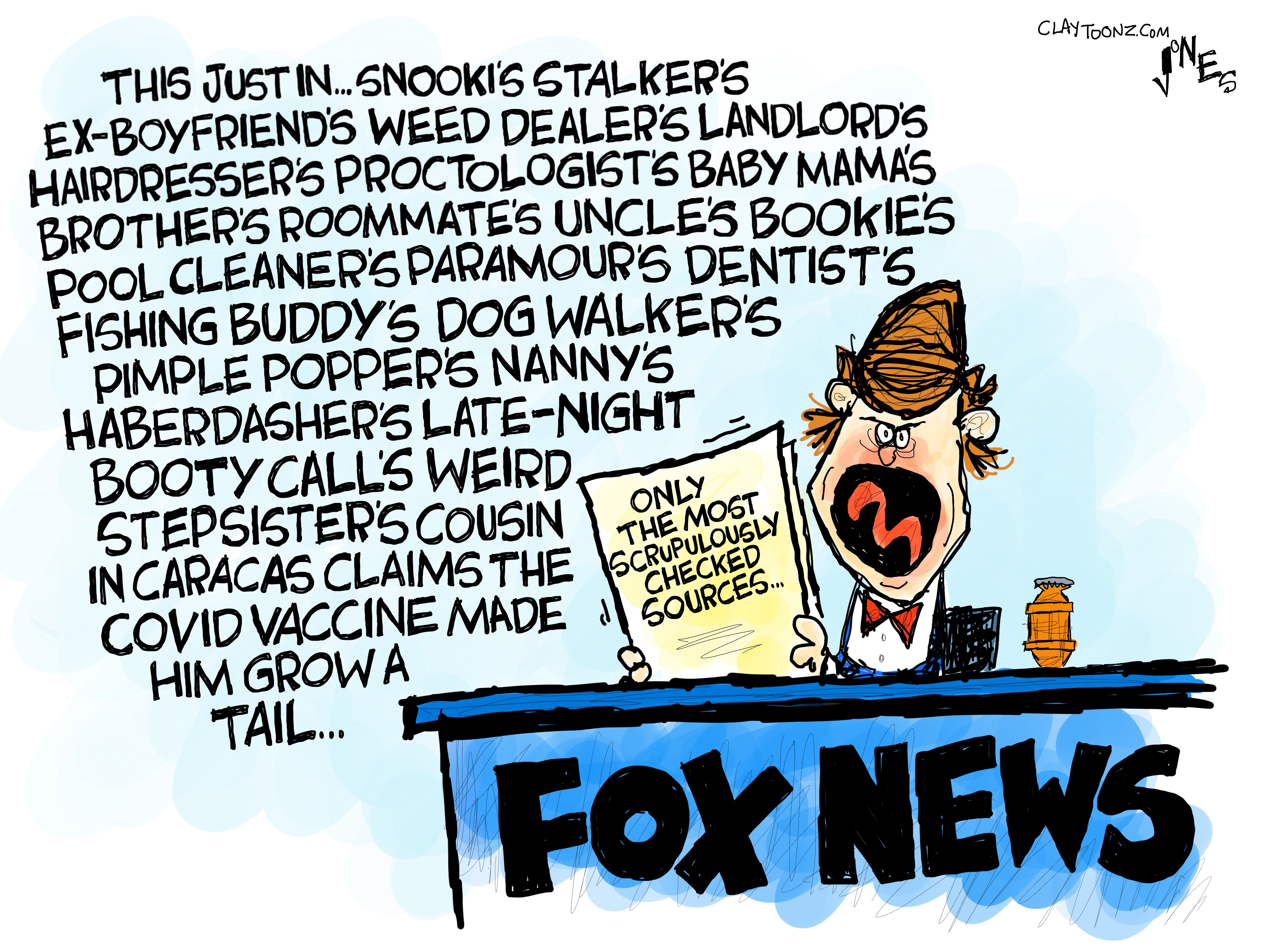 I have a cartooning colleague who has some views on the coronavirus you should not trust. It’s not what you think. He’s pro-vaccine and maybe pro-face mask. But now he’s telling people that hand sanitizer doesn’t work against the coronavirus. He claims he caught COVID about three months before anyone else in this country caught it. And after being fully vaxxed, he slithered into a Walgreens, didn’t tell them he was already fully vaxxed, and got a booster before the CDC advised for it.

I have another cartooning colleague who is anti-face masks, anti-vaccine, anti-social distancing, claims the government is using all of it to control you and the virus was a hoax. He claims it’s no worse than the flu and the number of deaths are fabricated. He claims he tested positive for COVID antibodies and like Rand Paul, he’s now immune…forever. He calls people who wear face masks “sheeple” and cowards and mocks them for being afraid to leave their homes without a facemask, even though he’s afraid to leave his home without an assault rifle.

Do you know what both of these cartoonists, one being a liberal socialist and the other being a Nazi-supporting white supremacist, have in common other than being cartoonists? They’re not scientists or doctors. You should not believe what they say without fact-checking it. Even though anything I post has been confirmed by scientists, you should not blindly trust me. Go behind me and fact-check what I say. Why? Because I’m not a doctor or a scientists either. One of my best friends is a physicist and I can’t tell you what he does for a living even though he’s told me a thousand times. I am not a scientist and that, you do not have to fact-check.

Even though cartoonists are supposed to base their work on facts and real information (too many cartoonists are NOT doing that anymore), you still can’t totally trust a cartoonist for your science. Last week, I saw a cartoon blaming natural disasters on God’s wrath over our woke culture. It’s not global warming, it’s trans athletes in little girls’ bathrooms. Granted, that guy’s a climate-change denying fundamentalist zealot lunatic, but still…trust scientists.

Nicki Minaj is a very famous pop singer even though I can’t name one of her songs (except for the one with Lonely Island, “The Creep”). Minaj, who is from Trinidad (in case you’re a Republican, Trinidad is an entirely different country and not some girl named Trini’s daddy) is refusing to be vaccinated and says her cousin in Trinidad is also refusing to be vaccinated because a friend of hers got the vaccine and it made him impotent with swollen testicles. Rose McGowan, another anti-vaxxer celebrity, is backing Nicki’s claim about her cousin’s friend in Trinidad.

Did you have a friend when you were a teen, or maybe you were the friend, that claimed he had a girlfriend but she went to a different school? Maybe you or that friend claimed the never-seen girlfriend was in Canada. The cool thing about doing that to defend yourself from dreaded accusations of virginity is that nobody can prove you’re lying. Nobody can fact-check it because nobody ever goes to Canada. Hell, it may not even exist. All those photos and videos of Canada were created in the same studio they faked the moon landing in. But, you can’t put it down as certifiable fact that this person claiming he has a girlfriend elsewhere is definitely telling you the truth and not lying his virgin ass off. By the way, my high school girlfriend lives on the moon. Good luck debunking that, fuckers.

But ya’ know what I’m thinking? I’m thinking Tucker Carlson was that guy back when he was a student at a fancy-schmancy pants prep school. Tucker got kicked out of a Swiss prep school, probably for being too white, and I bet when he resumed studies at a U.S. prep school, he claimed to have left a girlfriend back in Switzerland. I’ve seen photos of Swiss women and I’ve seen photos of Tucker. Trust me: Tucker never had a Swiss girlfriend. If someone shows you a photo of their girlfriend, and it’s on a box of hot chocolate, she’s probably not real.

I’m not just basing this speculation that Tucker had an imaginary cartoon girlfriend when he was in prep school on how Tucker looks, his punchable face, or how feeble and undesirable he is. I base this on the fact Tucker took Nicki’s claim and spread it.

Tucker Carlson reported Nicki’s claims…and then shockingly, he made a correction. What he corrected was his initial reporting that it was Nicki’s cousin who has a big-ball crisis, and not her friend’s balls. I’m glad he cleared that up. Tucker wants to get in touch (hopefully, not literally) with Nicki’s cousin’s friend so he can fly down to Trinidad to get the full scoop on the swollen nuts. It will be the first time testicles were ever interviewed by a dick. Hey, Tucks….as the great Tallahassee said in Zombieland, “Nut up or shut up.”

This has gotten so crazy that Dr. Anthony Fauci and the health Minister of Trinidad have had to debunk it. And Dr. Fauci has much more important things to do, like debunking stupid shit Rand Paul says and refraining himself from leaping over a table and kicking his ass as though he was his next door neighbor. I have been fully vaccinated and I can assure you that my testicles…wait a minute…mmmhmmm….yeah…OK. I just checked and they’re still fine. No, Tucker can’t inspect them.

The worst thing about ballgate might that someone with a primetime cable news show on a supposed news outlet is pushing unverified claims as fact. Even if you do have a talk show on a news channel that specializes in opinion, you’re still supposed to be a journalist. You’re still supposed to abide by the ethics of journalism. The ethics of journalism prevents most journalists from spreading misinformation on stolen elections, horse de-wormer, or third-person claims without verification, like Nicki Minaj’s cousin’s friend’s swollen balls.

Keep in mind, Tucker is in that same right-wing crowd that cast aspersions on actual news outlet’s use of anonymous sources. Before Tucker supports and helps spread this wild claims, he should make a trip to fondle some Trinidadian balls.

Tucker is spreading this unverified story for one of two reasons: He is desperate for anything to debunk COVID vaccines or…he really wants to touch some balls.