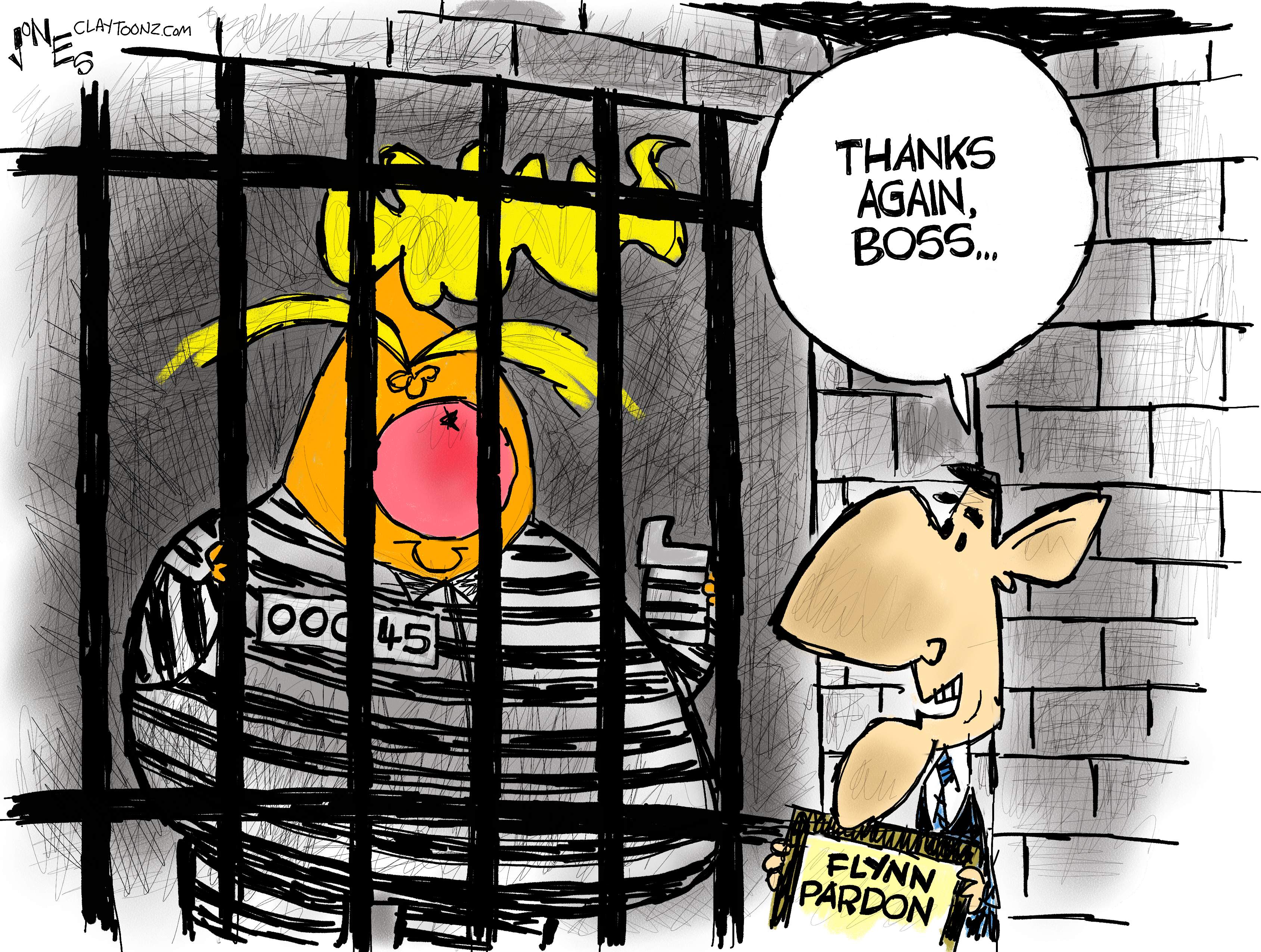 Since I’m social distancing and hanging by myself today, why not draw a cartoon? Who am I kidding? I was going to draw one anyway. Hell, last Thanksgiving, I was in Washington, D.C. with my then-girlfriend. We had Chinese food in China Town and saw the Capitals play (they won. I bought a cap)…and the next morning while she was having breakfast alone, I was drawing a cartoon before we drove to Colonial Beach to have dinner with her family. It was nice. There was fried oysters.

Is it any wonder I’m single?

A few things about this pardon of Michael Flynn:

By accepting it, Flynn, who had admitted guilt twice before retracting, is admitting guilt.

Donald Trump tried to issue this pardon in a news hole. Whenever a politician wants to do something with little coverage, they do it in the afternoon and it’s best on a Friday. Here, Donald Trump issued a pardon to one of his goons on Thanksgiving eve. If this was last year, he would have done it while I was stomping around China Town. A lot of the press were winding down and preparing for family and turkey yesterday afternoon. By the time Monday gets here, nobody’s going to remember this and there will be some new outrage to be outraged about.

Donald Trump keeps screaming he won the election, “by a lot,” yet he pardoned a goon which is his acceptance he’s going out the door. He’s leaving.

I drew about Trump pardons yesterday, but how many more pardons am I going to draw? Will he pardon George Papadopoulos, despite not knowing him and claiming he was “just a coffee boy?” Some are saying he might pardon Rick Gates, but he cooperated with Robert Mueller’s investigation. I totally expect a pardon of Paul Manafort, who is in prison and refused to cooperate with Mueller. Trump will reward him. Roger Stone, who had his prison sentence commuted, is publicly asking for more. He wants a pardon. Of course, Roger Stone is a low life and has no reservations about appearing guilty. I expect Stone to get his pardon. He’s disgusting which plays into Trump’s wheelhouse.

According to reports, there is a team in the White House studying who to pardon and that team is being led by none other than Trump’s son-in-law, Jared Kushner. Who better to lead a team studying the pardon of Trump goons than a Trump goon? The Biden Justice Department should add the businesses of Jared to their investigations. Perhaps Jared will receive a pardon. His wife, Ivanka, is being investigated. Maybe daddy will pardon her.

Perhaps Donald Trump will pardon Steve Bannon and others involved with the build-the-wall scam. He issued a pardon for conservative conspiracy theorist columnist Dinesh D’Souza, who pled guilty to making illegal campaign donations. He also pardoned a friend of Steve Baby Fishmouth Mnuchin, Wall Street Executive Michael Milken who pled guilty to securities and tax violations, got 98 racketeering charges dismissed, and is still worth over $3 billion.

Alan Dershowitz is representing a couple of lesser-known goons and he’s angling to have them pardoned. He praised Trump’s pardon of Flynn. He’s either rubbing Trump for a few pardons or he’s actually a huge fan of Donald Trump issuing pardons as reward to his associates.

In case you’re a Republican, let me lay it out for you: Anyone pardoning their associates is engaging in corruption. It’s a reward for their silence. Do you see Michael Cohen receiving a pardon?

The only people Donald Trump has pardoned has been goons and corrupt racist mother fuckers like Sheriff Joe Arpaio, celebrity causes, billionaire Wall Street grifters, and his friends. You don’t really see poor people…or non-whites…with unfair prison sentences receiving pardons…unless a Kardashian lobbied for them. Most of the people he pardons are guilty rich assholes…just like him.

I really hope Donald Trump does pardon himself so we can finally have the question answered. Can a president pardon himself? I say no because you can’t be your own judge. But then again, there are three Trump justices on the Supreme Court which is corrupt in itself.

Of course, Donald Trump is corrupt so I expect him to pardon himself.

Donald Trump is the most corrupt president in our nation’s history. He’s stopped working as president since he lost the election. He’s only left the White House to golf. He won’t answer questions from the press. And the only thing he’s done is bitch and pardon his goons. He’s going to be corrupt all the way to January 20.

What I really hope for is that Donald Trump eventually lands in prison. And when that happens, I hope the irony of his pardons comes to him.