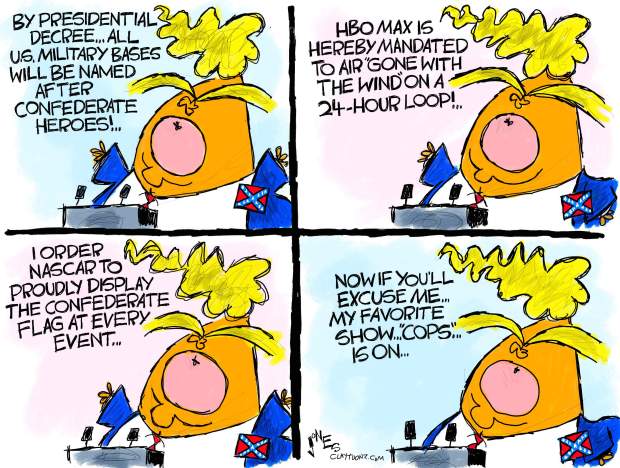 Despite all his faults, Donald Trump is still the best president of the Confederacy since Jefferson Davis.

While military leaders were open to renaming the TEN U.S. military bases named after confederate losers, er…generals, Donald Trump swung for the racist fences yesterday by tweeting he would never allow the renaming of these bases.

In a tweet Donald Trump reportedly labored long and hard over before sending, he said, “These Monumental and very Powerful Bases have become part of a Great American Heritage, and a history of Winning, Victory, and Freedom. HEROES who won two world wars were trained on the Hallowed Grounds of the bases. Therefore, my Administration will not even consider the renaming of these Magnificent and Fabled Military Installations…Our history as the Greatest Nation in the World will not be tampered with. Respect our Military!”

Yes, I had the same exact thought. Oh my god.

Where do I start? OK, first… a “history of winning, victory, and freedom?” He labored long and hard on this? The Confederacy LOST the war which means it was NOT A “victory.” Also, the Confederacy was not fighting for freedom. Also, we trained heroes at these bases to fight in Vietnam which we did not win. You know, that war Donald Trump skirted by claiming he had bone spurs.

How does naming our bases after former foes, traitors, and racists respect our military? I’m hesitant to point out we don’t name U.S. bases after other former adversaries we fought as I don’t want to give Donald Trump and Stephen Miller the idea of renaming any bases after Nazis.

Donald Trump is doubling-down on the racism and the batshit crazy. How racist and backward do you have to be less progressive than NASCAR? Yesterday, NASCAR, that supposed sport where cars drive around in circles that’s popular in the south and only the south, declared the Confederate flag will no longer be allowed at their events. I don’t think the south has taken a blow like this since they lost the war, Hee-Haw was canceled, and Virginia and North Carolina banned indoor smoking.

NASCAR decided to ban the hater flag after hearing the views of Bubba Wallace, a man who defies two stereotypes: A black guy named “Bubba” who competes in NASCAR.

In other news, HBO MAX announced they are pulling “Gone With the Wind” from their lineup and will bring it back later to be presented in its historical context. As in explaining it was made in a much different racist time. Frankly, my dear, a lot of racist who give a damn are freaking the fuck out.

Disclaimer: “Gone With the Wind” was my mother’s favorite movie. I think I’ve seen the movie a thousand times but not all at once. It was always on a loop, like Christmas Story on Christmas day.

A conservative cartoonist who has been on a recent bender of making racist posts on Facebook declared voluntarily yesterday, “I am not a racist.” Then he added the caveat, “Even though I believe ‘all lives matter.'” Shortly after that, he defended “Gone With the Wind” by pointing out that actress Hattie McDaniel was the first black American to win the Oscar as if that makes up for the racist stereotypes and presentation in the movie. I think he’s arguing “Gone With the Wind” is woke. What he failed to mention is that McDaniel’s character in that movie didn’t have an official name as she went by “Mammy.” Also, while McDaniel did win the Oscar, she was not allowed to attend the presentation to accept her award in person.

The bases named after Confederate losers are, Camp Beauregard, Fort Benning, Fort Bragg, Fort Gordon, Fort Lee, Fort Pickett, Fort Polk, Fort Rucker, Fort A.P. Hill (which is here in Virginia), Fort Mammy, and Fort Hood (bonus points if you find the one I made up). Personally, I think we should only slightly change Fort Rucker to “Fort Darius Rucker.” Hey, he’s a southerner. How about Fort Jeff Gordon?

Fort Hood is of particular interest to me. I was born at Fort Hood. My father was stationed there as a drill sergeant and I have a Fort Benning yearbook from 1966…or I did until my little sister stole it over a decade ago and hasn’t returned it despite promise after promise because she’s a typical Trump-supporting-…AAAAARRRRRRRRRRRRGGGHHHH. I have issues but I digress.

How do I feel about renaming the place where I was born and my father served before shipping out to fight in Vietnam? Go ahead and change the name. Renaming the fort doesn’t erase history. It doesn’t erase my father’s accomplishments. It won’t erase me (sorry, haters). To be honest, if my dad was still alive, he’d probably be pissed as hell with talk of renaming it, but dad was wrong about a lot of stuff. He was an NRA member and I didn’t meet him until I was 21 so if he was still alive it’d just be another one of his opinions I don’t care about. How about “Fort Deadbeat,” you no-child-support-paying-son-of-a…Again, I have issues.

But in case you haven’t noticed, it’s usually only white people who get upset about taking down Confederate statues or taking Confederate names off roads and high schools. But look at it like this, why should a black American be forced to have Jefferson Davis’ name on their high school diploma? Again, that’s fucked up. We don’t force Jews to attend Himmler High or Joseph Goebbels Middle school. We don’t even have Eva Braun beauty academies (we don’t, do we?).

And the one thing being canceled that really upsets me is the TV show “Cops.” I’m not upset because I’ll no longer be able to watch police chase naked black dudes through alleys and parking lots (I think every show has at least one naked bad guy). I’m upset there won’t be an episode when they arrest Donald Trump. I would buy the Pay-Per-View to watch him get tased while wearing a wife-beater.