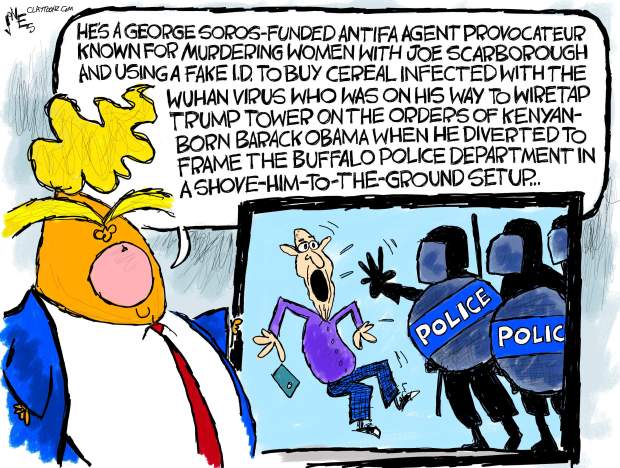 Donald Trump hasn’t taken one moment to be presidential. I found it funny that he and his campaign promised he would be presidential after he was inaugurated which was an acknowledgment he wasn’t presidential and instead was behaving like an immature narcissistic toddler with major insecurity issues because his parents didn’t love him. On top of not being presidential, Donald Trump doesn’t even pretend he wants my support. He caters to the most racist and vile of America. He also caters to the most stupid.

Say what you will about George W. Bush and his lie to get us to invade Iraq, but even he didn’t push the lie that Iraq funded al Qaida or attacked us on 9/11. Make no mistake, that lie was spread by others and the Bush administration didn’t do anything to kill it. In fact, they went out of their way to avoid it with Dick Cheney going so far as to say he could see why some Americans would believe Iraq attacked us on 9/11, without saying whether it was true or not. They were bastards but even those bastards didn’t want to be on the record pushing baseless conspiracy theories. Being a person of low moral fiber and void of ethics and principles entirely, Donald Trump has no qualms about spreading bullshit.

Donald Trump has spread a lot of bullshit. Some more harmful than others. His first act as president (sic) was to send Sean Spicer out to lie about crowd sizes. While that lie and the ones about illegal voters might make you roll your eyes, his conspiracy theories about Obama wiretapping Trump Tower and the FBI engaging in a deep state coup only helps Russia. His attacks on Joe Scarborough being a murderer is sickening. And like after each of these stupid attacks, you think he can’t get any worse knowing full well he will. He did.

Yesterday, he tweeted a conspiracy theory that Martin Gugino, the 75-year-old man Buffalo police shoved to the ground during a protest was really an “antifa agent provocateur.” Yup. Donald Trump, who was probably inspecting the bunker behind the new fence and soldiers surrounding the White House when he sent that tweet, was pushing a conspiracy theory that originated on the dark web.

Donald Trump got the conspiracy theory from One America News. Even when Sean Hannity pushed the Seth Rich conspiracy theory, it was on his stupid opinion show and not part of an actual news story on Fox News. OAN, just like your crazy tinfoil-hat wearing uncle who lives in your grandmother’s attic you’re forced to see every Thanksgiving, does not know the difference between propaganda and news. That explains why Donald Trump watches it.

Trump tweeted, “Buffalo protester shoved by Police could be an ANTIFA provocateur. 75 year old Martin Gugino was pushed away after appearing to scan police communications in order to black out the equipment. I watched, he fell harder than was pushed. Was aiming scanner. Could be a set up?”

Previously, ONA pushed a conspiracy theory that Covid-19 was an effort by Bill Gates, George Soros, China, the Deep State in population control. What’s more fucked up than that is the President (sic) of the United States watches it. Of course, this is the same guy who thought the National Enquirer should have won a Pulitzer Prize and its chief should become the publisher of The New York Times.

The reporter who pushed this story on OANN is a Russian who has also worked for Sputnik, a Kremlin-controlled news outlet. Sputnik is just one of Russia’s weapons used to attack American elections. OANN is not a legitimate news organization which explains why they actually have a reporter at White House press briefings who is often called on by Press Secretary, Kayleigh McEnany to ask questions like, “Is it alarming that major media players, just to oppose you, are consistently siding with foreign state propaganda, Islamic radicals, and Latin gangs and cartels? And they work right here at the White House with direct access to you and your team?” Scooch over, Hannity. There’s a new burrower for Trump’s sphincter.

Where did OANN get this stupid conspiracy theory? You’ll be glad to know it’s not from 4chan or Qanon. Nope. It’s from Conservative Treehouse, the new 4chan. It’s still a home for tiki-torch Nazis wearing that racist frog symbol on their T-shirts.

Spreading this shit is dangerous. I bet you believe antifa is instigating riots and most protests aren’t peaceful. Republicans are pushing that shit despite there not being any facts to base it on. Now, the fucknuts will believe a victim of police brutality was an agent of antifa while not realizing there is no antifa organization. The real irony here is that every single one of these pushers of conspiracy theories, including Donald Trump, are “useful idiots” for Russia and are acting as…wait for it…agent provocateurs.

Yesterday, New York Governor Andrew Cuomo said, “President Trump did a tweet today that surprises me — even after all the tweets that he has done.”

Cuomo added, “What do you think, it was staged? You think the blood coming out of his head was staged? Is that what you’re saying? You saw his head hit the pavement, you see blood on the pavement. He should apologize for that tweet, because it is wholly unacceptable. Show some decency, show some humanity… you’re the president of the United States.”

The only thing I disagree with Governor Cuomo on is that he called Donald Trump “President Trump.”