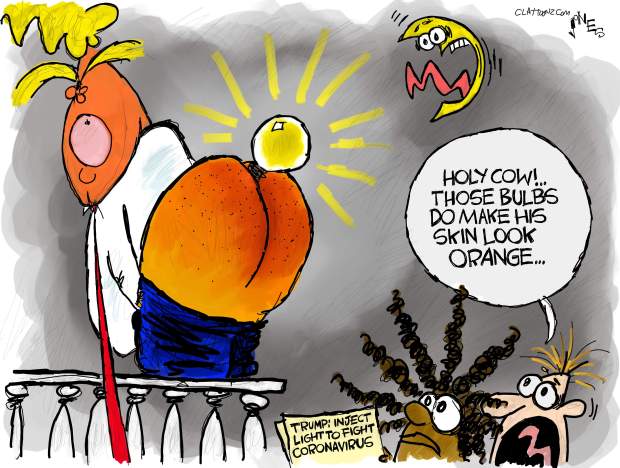 Right when I thought of this idea, I cracked up laughing. If I can make myself laugh, hey. Of course, that could also mean I’m truly demented and been shut in too long. But, while sketching out the template for this, I realized we’re talking about two different types of bulbs.

They all said go. One of them was horrified but she still said go.

Here’s another funny thing: I got an email this morning from one of my clients asking if I could do some cartoons that are not on Donald Trump.

During this pandemic, I’m offering my cartoon service for free to newspapers and other news outlets. Several are taking advantage of this with some even telling me they probably won’t become paid subscribers when this is over. That doesn’t bother me as it comes with the territory.

I received the email this morning after today’s Damn Yankees cartoon went out. The editor explained they’re in a red state and his readers can’t handle Trump cartoons. Those weren’t his exact words, but you get it. I do feel kinda bad if he can’t use any of my cartoons because there are so many on Trump. The next one’s probably going to be on Trump too.

I even got one email from a staffer of a different publication after his editor took me up on my offer. He wrote, “My editor will never use any of your cartoons. He’s a right-winger. This place sucks.”

I do want to make my clients happy. I do want to give them cartoons on a variety of subjects. I realize I draw a LOT of cartoons on Trump. And, I’m not really that fond of drawing Donald Trump. Also, it’s not that these editors are pro-Trump themselves. They tend to be editors of smaller papers in an industry that’s been struggling for over two decades. By the time I was leaving The Free Lance-Star in 2012, ANY reader complaint got a personal ass-kissing phone call from the editor. The editor who wrote me the email this morning is a really nice guy who I know isn’t a Trump sycophant. He’s looking out for his business. I don’t get mad at these editors and publishers. Another thing is, I can’t tell an editor I know his community better than him. I also can’t tell him to run my work despite it being a threat to his business and maybe even his own personal safety.

But here’s the thing, kids: I gave up a while back worrying about how often I draw Donald Trump. I have lost clients because of Trump and my being too liberal. I have editors reply to my solicitations with hostility. To my political cartoonist colleagues, have you ever been called a “libtard” by a newspaper editor? I have.

Last year, Canadian cartoonist Michael de Adder (who does incredible work), claimed he lost his contract with the Brunswick News, where he was their featured cartoonist for 17 years, because of a cartoon he drew on Donald Trump he never even submitted to that newspaper. While he received international attention for this, it’s really a lot more common than the press made it out to be…which they should be aware of because they’re the press. Dropped for a cartoon criticizing Donald Trump? Please. That’s a Wednesday for me.

I’ve had editors and other people tell me that I would have more clients if I was middle of the road or even a right-winger. I even had a few suggest I draw right-wing and left-wing cartoons. They don’t get it. While it’s true I would have more clients this is about me being me and as irreverent and weird as possible. It’s about being honest. It’s also about having fun. What’s the point of drawing boring political cartoons?

I was with Creators Syndicate for 12 years and they were great to me, but I didn’t make enough money to survive without a job (I had just been laid off). I decided to start my own syndicate and not share the money. But, while doing that I decided since I didn’t work for a newspaper anymore, I was going to do whatever the hell I wanted. I was going to have as much control over my work as possible. So, financial hits don’t dictate how I do my cartoons. I will lose money to keep my soul.

There are times where I decided to do something that’s not on Trump out of concern that I’ve done too many recently. It’s also a good break for me. But I’ve mostly stopped worrying about that. During this time, and I don’t just mean during the pandemic, covering this specific president (sic) is extremely important. My work will not be dictated by a bunch of readers afraid of reading real news. Why should I cater to an audience for whom racism is not a deal-breaker? Why should I worry about what people think who support such a vile president (sic)?

Anyway, what’s really funny is that after complaining that I draw too many Trump cartoons, they got this one.