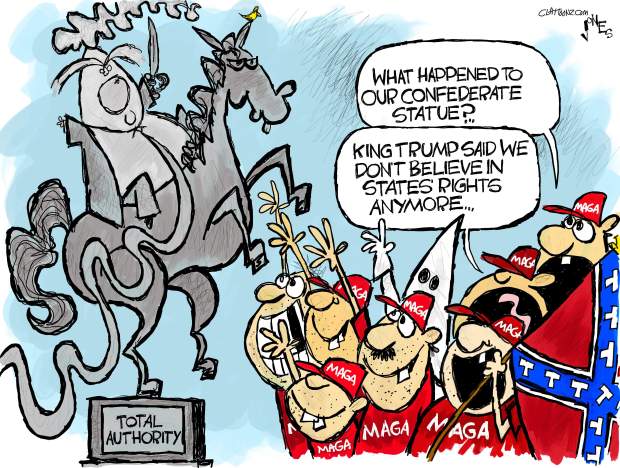 And just like Donald Trump crashes his talking points into each other, his cult is constantly getting their chocolate in their peanut butter. The only way that metaphor doesn’t work is that chocolate and peanut butter together is delicious. What Trump’s supporters are eating is Trump’s bullshit (in case you’re a Republican: Not delicious).

Let’s take one of Trump’s most recent stupid comments. He claimed “total authority” and can order states to reopen and end their stay-at-home orders. Nope. He can’t. We have a Constitution that doesn’t allow that which of course, Donald Trump has not read. We had this little thing called the “American Revolution.” It was over a king telling us what to do. We didn’t like that.

Here’s where Donald Trump’s shit runs into his shit: He refused to tell states they should issue stay-at-home orders because he can’t do that. He was afraid of doing that. Then, he says he can order them to reopen. He says states are responsible for their own ventilators and tests, he takes no responsibility, yet he is responsible for their reopening. He’s instead thrown more responsibility at China, the World Health Organization, governors, President Obama, Democrats, and the media.

His supporters consist of gun nuts. Part of their argument for guns is that they’re needed for that day when the big government comes for their guns. So you need your guns to keep the government from getting your guns. Right? You need your guns to protect you from a president who acts like a king. I mean, they all swore President Obama was coming for them and they’d be damned if they were going to let that happen. Now, their Dear Leader says he has “total authority.” I hope they’re locked and loaded.

When you talk to a supporter of the Confederacy, they argue the Civil War wasn’t about slavery but over states’ rights. Of course, the only right at issue during the Civil War was the right to own human beings. I’ve seen one Trump-supporting cartoonist draw a cartoon that governors can’t tell you what to do…then turn around and say that Donald Trump can tell you what to do. What happened to all that states’ rights shit?

They also argue the federal government shouldn’t be able to push abortion in their states and that their state has the right to ban them and shut down clinics. But, the president can order businesses to open and close? Again, what happened to states’ rights?

There are federal laws that govern all the states. They’re passed by Congress. If they’re challenged, it goes to the Supreme Court. The president doesn’t pick and choose. He has a lot of power in emergencies, but not the power to order governors around. Someone needs to sit Donald Trump down and force him to watch all the Schoolhouse Rocks.

Can you imagine the outrage if Obama gave the governor of Texas an order…or better yet, tell the governor of Indiana, Mike Pence during his term, to enact gay-friendly laws? Republicans got upset over Obama invading Texas and that never actually happened. Red states sued so they wouldn’t have to enact Obamacare.

But let me warn you now, there will be statues of Donald Trump in fucknut areas of the country. If your town is one of them, move…unless you’re a bird. You’ll have something new to shit on.