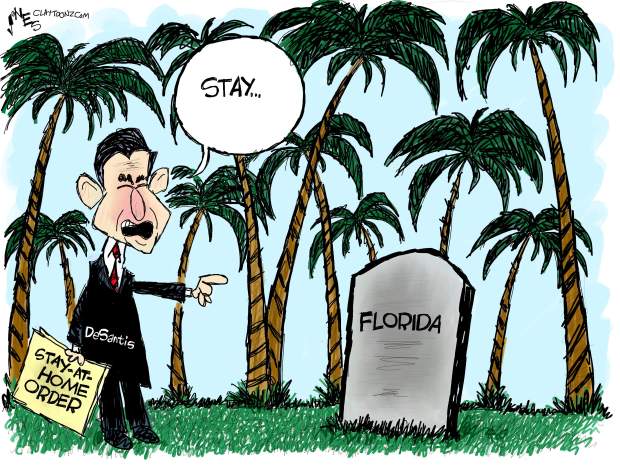 When Florida Governor Ron DeSantis was in Congress, he introduced legislation that required the Justice Department to report to Congress whenever any federal agency failed to enforce a law. This was in 2014 and a swipe at the Obama administration. It failed and he didn’t bother to reintroduce it during the Trump administration. I wonder why.

After Trump was in office and inflicting his corruption and con job on America, DeSantis voted in favor of a bill to strip all funding from the Mueller investigation. DeSantis adopted the Devin Nunes platform of protecting Donald Trump at all costs, no matter what he was accused of or how much evidence was apparent. For DeSantis, it’s Trump, Trump, Trump, Trump. He was also a member of the Fucknut Caucus, but they prefer to call it the “Freedom” Caucus.

When DeSantis ran for governor, he was endorsed by Trump and based his campaign on being the most fucknutty of all the fucknut Republicans in the primary. He ran commercials where he was teaching his children to say, “Make America great again” and building a racist wall out of lego blocks. He dressed his infant in a MAGA jumper in these commercials (which, I am assuming, was soon full of shit). He read “Art of the Deal” to his kids to prevent them from becoming intelligent adults. When asked, he couldn’t find one issue where he disagreed with Donald Trump.

Donald Trump had become a kingmaker in conservative politics, changing the Republican Party into the Donald Trump cult, and DeSantis became further proof of that after he won the primary. His credentials didn’t matter on statewide topics. All that mattered was that he burrowed deep up Donald Trump’s ass. In fact, he’s burrowed so deep up that ass, he allowed Floridians to die.

Governor (sic) Ron DeSantis refused to issue a stay-at-home order as other governors in the nation have done. Florida isn’t like Nebraska, where there are only five cases of coronavirus (detected so far). Florida isn’t even in the middle of states with verified cases. DeSantis is governor of the state with the fifth most cases. There are nearly 8,000 cases at this time and 100 deaths. Florida is the third-most populous state in the nation and it’s a contender to lead in coronavirus deaths.

Despite the rise of cases in Florida and the rest of the nation, DeSantis refused to declare a state of emergency. While all the other states with high cases of the coronavirus were implementing lockdowns, Florida went to the beach. Literally.

It’s bad enough regular morons live and breathe everything Donald Trump says and then end up dying because they ingested fish tank cleaner after Dear Leader said something about chloride beating the virus. But a governor shouldn’t put his entire state at risk because of the stupid shit that comes out of Donald Trump’s mouth.

Ron DeSantis should be serving the people of Florida, not just the Trump cult less enough, one person. Of course, that one person is Donald Trump.

DeSantis finally issued a stay-at-home order. What took him so long? Donald Trump didn’t take the virus seriously so the governor of Florida didn’t take it seriously. This is not my viewpoint. DeSantis said so. He explained his order by saying, “”When you see the President up there and his demeanor the last couple of days, that’s not necessarily how he always is.” Usually, he’s just racist and stupid. Before the order, he said he was following the White House on how he should proceed with the state.

Donald Trump spent a month denying and downplaying the virus. Governors like DeSantis, like their Dear Leader, put their citizens’ lives in danger.

Donald Trump boasted about banning travel from Europe…well most of Europe. He ignored the fact that people in the U.S. can cross state lines. So while one state has a lockdown, their neighbor may not. This doesn’t stop a virus. DeSantis has been unable to see that counties also have borders that people are free to cross.

The urban areas of Florida, where people tend to be more educated and less fucknutty, issued stay-at-home orders. But because their governor is in servitude to a fucking moron, he allowed the rest of the counties to carry on as if it was business as usual, thus infecting the entire state.