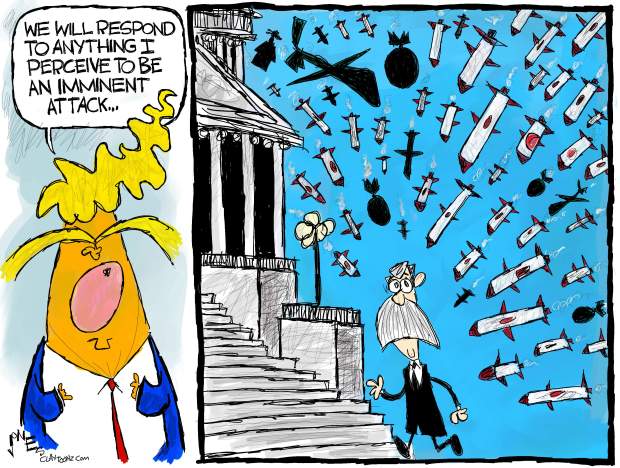 John Bolton, Trump’s former National Security Adviser, now says he’ll testify during Trump’s impeachment trial if the Senate subpoenas him. Keep in mind, the Senate is controlled by Republicans who don’t want anything that even slightly resembles a fair trial.

And what would happen if the Senate did send Bolton a subpoena? Bolton was in the room and is a direct witness of Donald Trump withholding military aid from Ukraine until they promised to investigate Hunter Biden and jump on board with the conspiracy theory that they, and not Russia, meddled in the 2016 presidential election. According to witnesses, in response to the corruption engaged by Trump’s personal goon, Rudy Giuliani, which involved Ambassador to the European Union, Gordon Sondland, Bolton said he didn’t want any part of this “drug deal.”

Will Trump order Bolton not to testify on a claim of executive privilege? It’s not like the Republican-controlled Senate would fight that in court. Would Bolton defy that order. Would the Senate still allow him to testify against a presidential order? All this is mere speculation because Mitch McConnell isn’t going to allow Bolton to testify because he doesn’t want to hear the truth or testimony that implicates Donald Trump. The Senate Republicans would rather enable Donald Trump’s corruption, and like Congressman Devin Nunes, participate in it with him.

But then again, maybe Donald Trump will just cut to the chase, consider Bolton’s offer an attack, not just on him but on the nation, and order him to be taken out.

Donald Trump considers attacks on him attacks against America. His administration has yet to define the “imminent attack” they claim the Iranian general was coordinating. If anything, they’ve only described the general’s past actions. Some of his past actions include posting mean memes about Donald Trump on Instagram.

This morning, Secretary of State Mike Pompeo scrambled to explain the justification for the assassination and called Iran liars engaged in propaganda. He did that while engaging in propaganda for Donald Trump with a straight face. I wonder if Trump’s people are aware of the hypocrisy or are they really that obtuse. Take Kellyanne Conway for example. She said Trump shouldn’t have to inform Adam Schiff of an impending act of war because he can’t be trusted. Seriously.

Even with Trump’s promise to hit “cultural sites” in Iran, Pompeo isn’t being clear or logical. He’s arguing that our nation will comply with international law, would never hit cultural sites and that Donald Trump is only talking tough with Iran because he has to. Pompeo is arguing that we shouldn’t listen the President (sic) of the United States because he’s lying.  Is Pompeo aware this is his argument or is he that obtuse? In case you’re a Republican, “obtuse” means being insensitive and slow to understand. And, in case you are a Republican, you didn’t understand that last sentence.