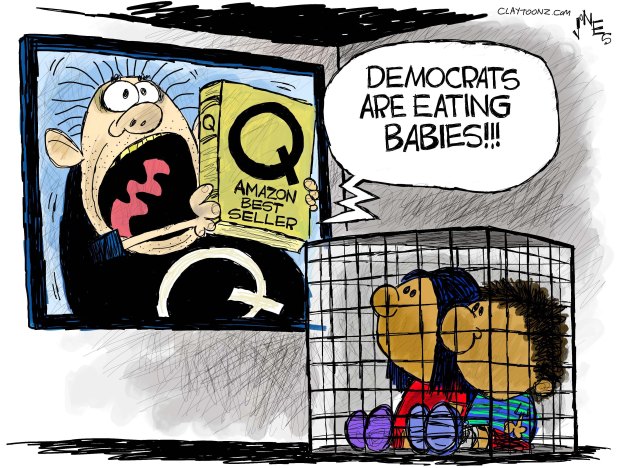 She told Committee Chair Bennie Thompson, “Sir, they are not cages, they are areas of the border facility that are carved out for the safety and protection of those who remain there while they’re being processed.”

Democrat Bonnie Watson Coleman asked Nielsen, “Does it differ from the cages you put your dogs in when you let them stay outside?” Nielsen answered, “Yes … it’s larger, it has facilities, it provides room to sit, to stand, to lay down…” Coleman interjected, “So does my dog’s cage.”

Nielsen kept arguing throughout the hearing that children who have been separated and lost under Trump’s dehumanizing immigration policies are not kept in cages…if we don’t call them cages.

Last year, more than 2,700 children were separated from their parents and detained by CBP with many parents deported without their children. Democrats and liberals are outraged. Trump supporters are also outraged over issues involving children, but not over any issues that actually exist. Like Trump’s call for a border wall, they’re crying about crises where there aren’t any.

If you watched any of the Conservative Political Action Conference, you would have heard the wingnuts scream about “infanticide” and the “culture of death,” which are their new talking points.

Speaking to CPAC, Mike Pence said, “With Democrats standing for late-term abortion and infanticide and a culture of death, I promise you this president, this party and this movement will always stand for the unborn.” You have probably seen similar rants on your tinfoil hat-wearing uncle’s Facebook page.

Senate Republicans failed to advance a bill last week called the Born-Alive Abortion Survivors Protection Act. Basically, if it had become law, it would have forced doctors to “preserve the life and health” of a child born alive after an abortion attempt, regardless of the wishes of the parents.

Dr. Daniel Grossman, a professor of obstetrics, gynecology and reproductive sciences at the University of California, San Francisco, told The New York Times that an infant being born alive after an attempted abortion is extremely rare. Dr. Kristyn Brandi, a board member of Physicians for Reproductive Health, told Vox that she’d never even heard of such a case. She said, “This is a part of the false narrative around this bill and abortion later in pregnancy.”

One of the ways this can occur is if a condition threatens the life of both the mother and the fetus, and labor must be induced in order to save the mother’s life. It’s unlikely the infant would survive, but this bill would have forced a doctor to attempt to revive the child or face up to five years in prison.

Immigrant children separated from their families, kept in cages, and lost in the system, Republicans don’t worry about that so much. Extremely rare cases of a child being born alive after an abortion attempt to save the mother’s life? Republicans are outraged. While they scream “infanticide,” nobody is killing the baby who was born alive. That’s just as big of a lie as claiming Democrats are eating babies.

According to a new book on Amazon’s best-seller list, Democrats are eating babies. Democrats, dingos, what’s the difference?

QAnon is a far-right conspiracy alleging a plot against Trump by the “deep state.” Q, who may be or several individuals, claims to be on the inside of the government and thousands of people believe this. Some of those people are Roseanne Barr, Alex Jones, and Jerome Corsi. Sean Hannity has even shared QAnon-related material on his Twitter account.

The book QAnon: An Invitation to the Great Awakening was supposedly written by 12 anonymous members of the group promoting the theory, and presents their ideas in what one customer review calls “a gentle way for uninformed ‘normies’ to find out what is really going on within the political class that have been ruling over us for decades.”

What are some of their ideas? The “deep state” involves President Obama and Hillary Clinton. Trump and Robert Mueller are actually working together and the Russiagate investigation is actually a ruse. Hillary Clinton is the leader of a Satanic cabal that feeds on the blood of children and profits off sex trafficking. And, Democrats eat babies. Yum. Those theories are almost as unbelievable as believing that Trump supporters read books.

It’s very easy to laugh at these people, and a lot of fun I might add. But, it’s dangerous to ignore them. One Q follower was arrested on terrorism charges after he drove an armored vehicle containing an AR-15, and blocking traffic on the Hoover Dam for 90 minutes. He was on a mission from Q to demand the Justice Department release the OIG report on the conduct of FBI agents during the investigation into Hillary Clinton’s server. The thing is, the OIG report had been released the day before, but he was demanding that they release the “real” one.

Members of the Q community have posted photos of Michael Avenatti’s office. Later, someone shared the picture of an as-of-yet unidentified man, appearing to be holding a cellphone in one hand, and a long, thin object in the other, standing in the street near the office, adding that a message “had been sent.” For what it’s worth, one of these nitwits posted a photo of what he/she thought was my house on a Facebook post. Shitweasels find that kind of stuff amusing.

In 2015, a shooter went to an abortion clinic in Colorado Springs and killed three people because he believed the now debunked far-right videos that Planned Parenthood was selling dead-baby-body parts. And that conspiracy theory isn’t even on the fringe as several presidential candidates promoted the lie.

These 4chan and QAnon people are unstable which seems to be a trait among Trump supporters…and Trump.

Trump is hate and he has a more than willing base that eats it up. For the rest of us, we have to live in a dangerous climate they’ve created.

Planned Parenthood is not selling the body parts of dead babies. Comet Ping Pong is not the base of a child-sex ring operated by Hillary Clinton. Democrats are not eating babies. Donald Trump is keeping children in cages. Which one are you more concerned with?