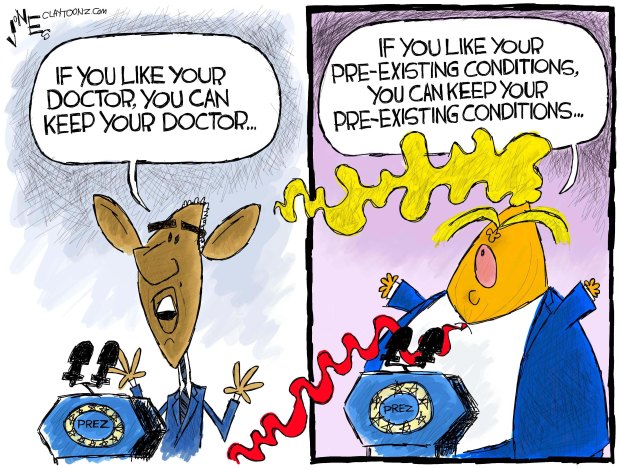 When you point out any of Donald Trump’s lies to one of his sycophants, you’ll hear two responses. They’ll either come at you about Obama’s 57 states comment or his “If you like your doctor, you can keep your doctor” promise in 2013.

To compare Obama’s 57 states gaffe to what Donald Trump does on a daily basis, one must be delusional. As Kellyanne Conway’s husband George tweeted, “There’s a huge difference between an isolated slip of the tongue and ceaseless, shameless, and witless prevarication on virtually all topics, large and small.”

But, Obama’s promise that you can keep your doctor turned out to be untrue for a lot of people. His actual quote was, “If you like your health care plan, you can keep it,” and PolitiFact named it the Lie of the Year for 2013.

Even with lies, there are differences between Obama and Trump. When Obama made his statement, it hadn’t been proven to be untrue at the time. As time went on and it turned out to be false, he stopped saying it. Eventually, Obama apologized.

Donald Trump lies about stuff that’s already known to be false, and he doubles down to perpetuate the lie. Then, his followers repeat it until they’re all gaslighted to the point that reality is their delusion. For example; Trump sycophants believe the economy didn’t recover from the Bush recession until January 2017, the day Trump took office. Most of them don’t even remember the recession started under Bush. This really defies reality since they actually lived through the Obama era, but maybe 62 million Americans were in a coma for eight years. If Trump has made the 57-states gaffe, Republicans would be in chat rooms right now arguing that there are seven additional states.

When Republican Congressman Bruce Poliquin of Maine was asked if he voted to repeal Obamacare, he says he didn’t. He tells this lie despite the record, and video evidence that shows he did vote to repeal Obamacare and its pre-existing conditions protections. He even removed a promise from his website to “end Obamacare.” Now, Republicans are telling voters that they’ll save pre-existing protections if we return them to Congress, despite the fact that they already tried to destroy it after spending several years promising to do so. Poliquin is just an example of these liars.

Of the 73 House Republicans in competitive races, 67 of them voted to eliminate Obamacare’s protection of pre-existing conditions. Now, they’re all champions for healthcare.

Senate Majority Leader Mitch McConnell is talking about destroying Obamacare after the midterm elections. He’s even talking about cutting Medicare and Social Security to help lower the deficit their tax cuts for the rich helped create. Despite this, Donald Trump says most Republicans are against it.

Trump tweeted, “All Republicans support people with pre-existing conditions, and if they don’t, they will after I speak to them. I am in total support. Also, Democrats will destroy your Medicare, and I will keep it healthy and well!” Trump tells a lot of lies. From that tweet, you’d think Trump has never talked to a Republican or himself.

While Trump talks about protecting coverage of pre-existing conditions, his own administration is backing a lawsuit that will destroy Obamacare. Trump’s Justice Department has declined to defend the health care law in court against a suit from 20 GOP-led states challenging Obamacare’s constitutionality.

After being unpopular for many years, Obamacare now has an approval from a majority of Americans. Despite promising to repeal it for the entirety of its existence, Republicans never had a plan to replace it. They still don’t. Trump’s promise during the presidential campaign was to replace it with “something better.” For as stupid and empty as Trump is, that’s the most substantial replacement plan any Republican has ever offered.

Don’t believe Republicans in their campaign to retain the House. They gave a huge tax cut to the richest of Americans while trying to strip healthcare from the rest. Now, they’re talking about cutting Medicare and Social Security while campaigning that they’ll save healthcare and Democrats, who gave us a national healthcare plan, will take it away.

Republicans say Democrats don’t have a platform but ask one of them what they’ll replace Obamacare with. They’re running on a campaign of fear while hiding that they’re the ones we need to be afraid of.