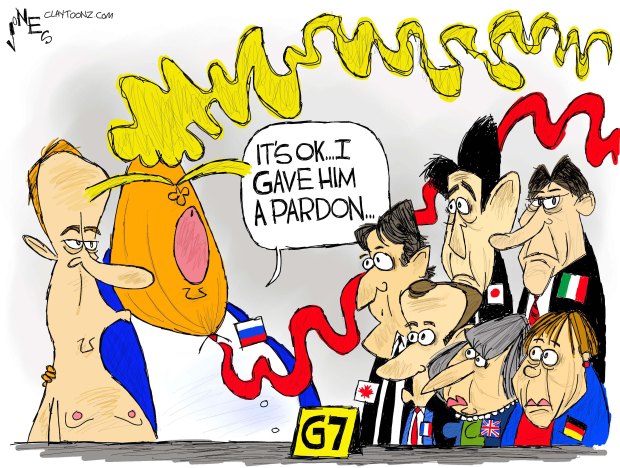 Before he stepped on Obama’s airplane to head to the G7 summit in Canada, Trump took questions from a few reporters and said that Russian President Vladimir Putin really wanted Hillary Clinton to win the election, and he, Trump, was his worst nightmare.

I don’t know about you but my nightmares consist of stuff, like spiders, finding myself naked in high school, falling off a cliff, Nickelback dressed as clowns, a hotdog with ketchup, you know….real terrifying stuff. Nightmares are not dreams of getting everything you want.

For Putin, that’s an American president who undermines democratic institutions like a free press while destabilizing NATO and our alliances in addition to spilling classified information to Russian spies in the Oval Office. Now, Trump is at the G7 campaigning for Russia to be invited back, which kicked Putin out for annexing Crimea.

What in the world could Hillary Clinton have given Putin to make him happier? Neck massages? Scratch that, because Trump may have already done that.

Trump was very eager to fight with leaders of our allies, like Canada’s Justin Trudeau and France’s Emmanuel Macron…on Twitter and through the press. Now that he’s actually face to face, he arrived late, and he’s leaving early. That’s because Donald Trump is a coward.

What does it say about our nation’s president who’s afraid of our allies but eager to get on a plane and arrive early for a date with the dictator of North Korea?

If Trump has prepared very little for meeting Kim Jong Un (who we hope is as dumb as Trump), the only thoughts he put into his trip to the G7 was how to get out of it. Reportedly, he asked aides if his presence was absolutely necessary and asked if he could cancel at the last minute.

Trump is now showing the entire world he belongs to Putin. At this rate, he may have to register as a foreign lobbyist. If Putin really wanted Clinton to win the presidency, he would have sent spies to her campaign HQ to dish dirt and had Wikileaks hack Trump. The only problem would have been Clinton’s refusal to collude with Russia because some people don’t want to commit treason.

You have to ask yourself what exactly does Putin have on Trump? That pee tape must be really nasty.