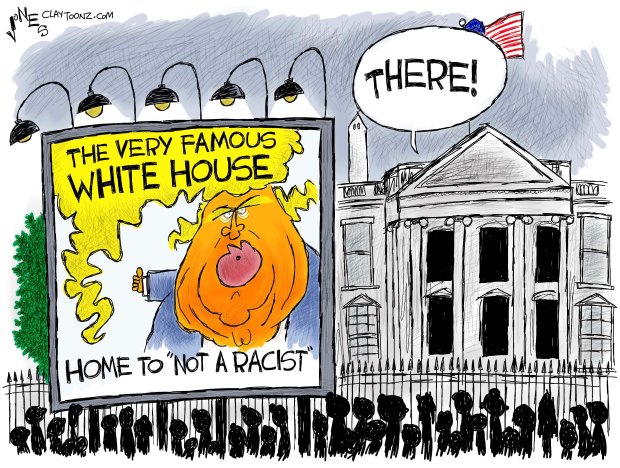 This week, congress sent a resolution condemning neo-Nazis, white supremacists, and the violence in Charlottesville. It was negotiated on a bipartisan basis by the delegation from Virginia, my state. It passed unanimously in the House and Senate. Donald Trump has signed it. Roy Wood Jr. of The Daily Show said, “Donald Trump is the only white dude I know who had to sign paperwork to prove that he don’t like Nazis. ‘Nazis aren’t my friends…yeah, we’re gonna need that in writing.'”

I just hope Trump doesn’t use this as an excuse to display more racist behavior, like every white guy believing having a black friend allows him to sing the N-word each time it comes up in Cee Lo Green’s song, Fuck You. “Oops. She’s a gold digger. Just thought you should know….” Yeah, don’t do that.

I know a fellow cartoonist who feels the need to tell everyone he’s not a racist, and he constantly gives out examples to prove he’s not one. I know a lot of people who don’t have to do that, probably because they’re not racist. Donald Trump has to do that.

This week, the White House is screaming for ESPN to fire Jemele Hill for tweeting out that Trump is a white supremacist. This is probably the first time the White House has demanded a personality from a television network be fired. Even the Obama White House didn’t ask NBC to fire that reality show dude who claimed he wasn’t born in this country in addition to being a racist. Who was that guy again? Oh yeah. Donald Trump.

Because, screaming for a network to fire a black person isn’t enough for one week, Trump doubled down on equating anti-fascists with Nazis. But, it’s OK. He now has paperwork saying he condemns Nazis…even though he thinks there were good people marching with them in Charlottesville chanting “blood and soil” and “Jews will not replace us.”

He also claimed he couldn’t condemn Nazis immediately after Charlottesville because he “needed to know all the facts.” But today, facts be damned. Trump tweeted about the latest attack in London, and probably gave out intelligence encouraging the terrorists to attack again, kill people, and hurry before the British catch them.

Trump has trouble hiding his racism because he is a racist. He has called Mexicans “rapists and murderers.” He said a judge can’t judge his sham-university case because the judge is Mexican. He’s trying to kick brown children out of this nation. And, let’s not forget his travel ban on Muslims.

So, while Congress has forced Trump to sign a piece of paper stating that he’s not a friend to Nazis, they haven’t taken away his wolf whistle.

The White House wants people fired who call the president a racist. Well, I’m calling him a racist. Donald Trump, you’re a racist. I have no doubt. Your supporters are enablers for whom racism is not a deal breaker. Though, most of them are racists too.

I assure you of this, no racist fucks are going to stop me from drawing more cartoons.

Creative note: This is kind of a bonus cartoon. You’re getting another cartoon Saturday morning. There are too many topics. In my last post, I mentioned two other ideas I passed over last night. This wasn’t one of them.