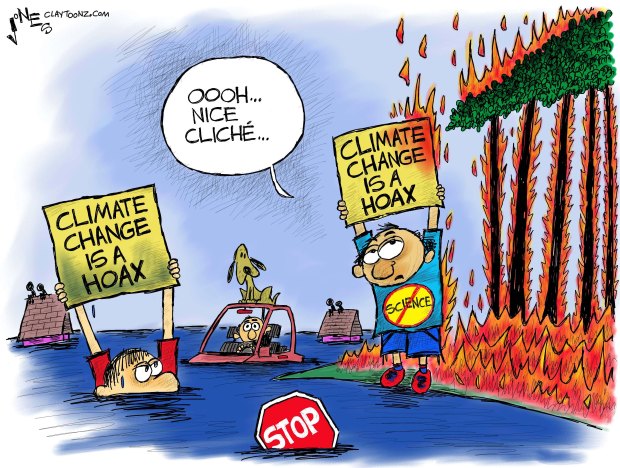 I don’t know which is more ironic. Conservatives who deny the science of climate change who are in areas affected by natural disasters, or the same conservatives asking for federal money for those disasters while screaming against the ill effects of socialism.

Wildfires are raging across the West in Oregon, California, Washington state, Utah, Idaho, Colorado, and Montana, and they’ve already burned over seven million acres. Houston, the Texas and Louisiana coasts are still drying out from Hurricane Harvey. Many people are estimating that the rebuilding will cost over $150 billion. That’s billions. Hurricane Irma is sweeping through the Caribbean and is aiming straight for Florida or South Carolina, and is the largest Atlantic hurricane ever recorded since they started recording hurricanes.

Your rigid partisan beliefs don’t change facts. They don’t change science. Harvey and Irma aren’t taking polls while they’re destroying your house. The climate doesn’t care what you believe, or that you don’t know the difference between “climate” and “weather.”

You’ll refuse to acknowledge wildfires and catastrophic level hurricanes are evidence of climate change, but I’m sure you’ll point out that February snow in Buffalo proves it doesn’t exist.

Like the guy in the cartoon, I’ll be rolling my eyes at you.

Creative notes: This cartoon is exactly why a lot of my colleagues don’t like me and I don’t have any friends. I make fun of them. Before we can make fun of other people, we have to learn how to laugh at ourselves. A lot of cartoonists haven’t figured that out. But in their defense, I can be a jerk.

Over the past week and then some, several cartoonists drew the guy in the water with a sign saying “climate change is a hoax.” Every cartoonist will have the same idea as another cartoonist from time to time (it happened to me last week), but some avoid the herds. At least they weren’t the same guys who drew arks. Someone lazy always draws an ark.

So, I tried to take the cliche and make fun of it while making an actual statement on the issue, while also realizing most readers won’t understand it’s a cliche. Most newspaper editors seem to love the most obvious ideas. I’ll be honest and admit that I often draw cartoons while not being sure if they actually work that well. This is one of them. I wait for the reactions. The worst reaction is no reaction.

My friend and colleague Matt Davies did draw one the other day that definitely worked. He was probably aware of all the “wading climate denier” cartoons and decided to put a twist on it. He’s one of the more brilliant people doing this job and his cartoon actually included a topic most haven’t tackled yet, myself included. I’m still jealous.