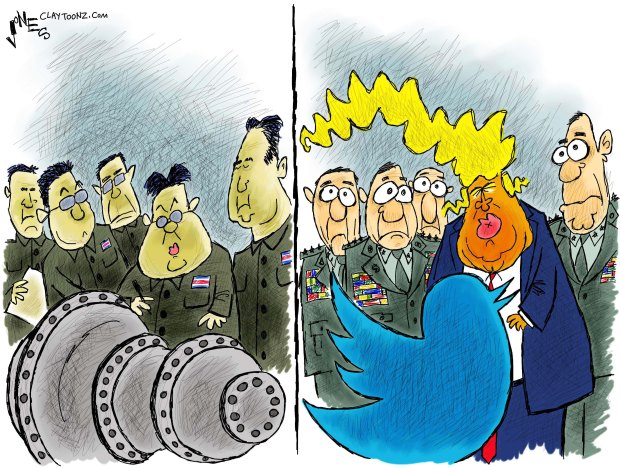 On Sunday, North Korea detonated its largest nuclear weapon to date, with an explosion five times greater than any of their previous tests. It’s no longer a question if the rogue regime has a weapon capable of destroying a large city, but if and when they can miniaturize one and place it inside a missile, and how far that missile can reach.

After North Korea seemed to back down from their threat of firing a missile toward Guam, Trump and his surrogates credited his “fire and fury” comments. Trump went on to say that maybe North Korea was “starting to respect us.” North Korea responded by firing a missile over Japan. Trump responded to that test by saying, “talking is not the answer.” And now, Kim Jong Un has detonated his largest weapon to date.

Trump’s response to this? Taking to Twitter, of course, and going after…our allies. Trump criticized South Korea’s approach to the North as “appeasement.” He is also threatening to end trade with any nation that deals with North Korea.

Apparently, Trump has instructed his advisers to prepare to withdraw from a free-trade agreement we have with South Korea. His threat to end trade with nations that do business with North Korea would include China, Russia, and India, among others.

Meanwhile, his tweeting might be as nerve wracking internationally as Kim Jong Un’s nuclear hobby. David Straub, a former State Department official who dealt with both Koreas, said: “They (South Korea) think they’re dealing with an unreasonable partner and complaining about it isn’t going to help — in fact, it might make it worse.” Straub also said, “Opinion polls show South Koreans have one of the lowest rates of regard for Trump in the world, and they don’t consider him to be a reasonable person. In fact, they worry he’s kind of nuts, but they still want the alliance.”

South Korea isn’t alone in thinking Trump is nuts and unreasonable. Michael Hayden, a retired Air Force general and former head of the National Security Agency and the CIA said, “You gotta watch the tweets.” On CNN he said, “I think we had an unforced error over the weekend when we brought up the free trade agreement with our South Korea friends on whom we have to cooperate. . . . It’s wrong on the merits, and it’s certainly not integrated into a broader approach to northeast Asia.”

Adam Schiff, the top Democrat on the House Intelligence Committee said, “We need to be working hand in hand with South Korea, and with Japan. Why we would want to show divisions with South Korea makes no sense at all.”

Of course, none of it makes sense. In the past, Trump described Kim Jong Un as a “smart cookie,” and on the campaign trail, he said he’d be “honored” to meet with Kim and have a burger with him. Going after the South only encourages Kim to continue actions that will put further distance between us and our allies.

If Trump’s tweets and saber-rattling rhetoric has been a test to see if they’d intimidate North Korea, we can now consider those tests as failed.

Trump claimed he knew more than the generals, and he could handle basically every problem better than Obama. He’s proven the direct opposite, which isn’t a surprise. He needs to work with his generals and try to find real solutions. His tweeting isn’t just endangering his presidency, it’s endangering South Korea, Japan, and the United States.

When are we supposed to start all that winning we’ll eventually get tired of? If “talking is not the answer,” then the first to shut up should be Donald Trump.

Creative note: I reserve the right to break my cartooning rules. One of the more recent ones has been to refrain from using the Twitter logo. It’s been used to the point of overkill by my colleagues. It’s as bad as using the “MAGA” caps. They were fun at first, but not after two years of campaigning. It’s time to find new metaphors…and then maybe going back to them occasionally. For me, a great time is a Sunday night when  I can’t get all the cylinders in my brain working.