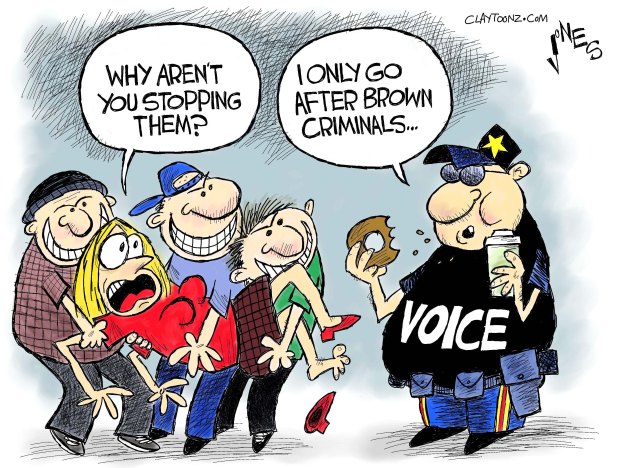 During Donald Trump’s State of the Disunion address to Congress last week he unveiled a new plan to unleash tyranny on people who are not the right color. That is, those who are not the white color.

The new program is called VOICE, which is an acronym for Victims Of Immigration Crime Engagement office, and not a singing game show featuring that guy high-pitched dude from Maroon 5. It was really hard to work out an acronym for “I Hate Brown People.” Its purpose is to go after undocumented immigrants who commit crimes. Number 45 said “I have ordered the Department of Homeland Security to create an office to serve American victims. We are providing a voice to those who have been ignored by our media, and silenced by special interests.”

Who he’s giving a voice to are racists and implementing a strategy to further build distrust and fear of immigrants. This despite the fact that immigrants commit crimes at a lower rate than the general public and hard-line immigration policies don’t matter. It’s also a strategy to shame “sanctuary cities,” or anyone with compassion and empathy.

Trump signed another stupid executive order establishing this office. The Department of Homeland Security will be relocating department resources currently going to advocating for undocumented immigrants to punishing them.

During his speech Trump used human props which were three guests whose family members were allegedly killed by criminals living in the US illegally.

Bernie Sanders may have said it best with “The murder of anyone is a tragedy, and our hearts go out to all families who lose a loved one to violence. But let’s be clear about what Donald Trump is doing tonight in inviting family members who saw a loved one murdered by an undocumented immigrant. He is stirring up fear and hatred against immigrants and trying to divide our nation.”

Sanders also mentioned victims of hate crimes by non-immigrants and wondered why Trump didn’t mention them. He could create a special unit to go after white racists who commit violent acts. He can call the special unit Cracker Jacks. We can work out the acronym later.

I know the Nazi and Hitler comparisons are getting old, but so are policies that remind of Nazi policies that criminalized being Jewish. Yeah, they had those. It started with framing Jews as criminals and building mistrust and things just got worse from there.

If you are a Mexican immigrant, or you know someone who is, visit Mexico Online for the locations, addresses, phone numbers and emails for the consulates.

Trump isn’t providing a “voice” to help people. But sanctuary cities and Mexico are willing to provide them a real voice.