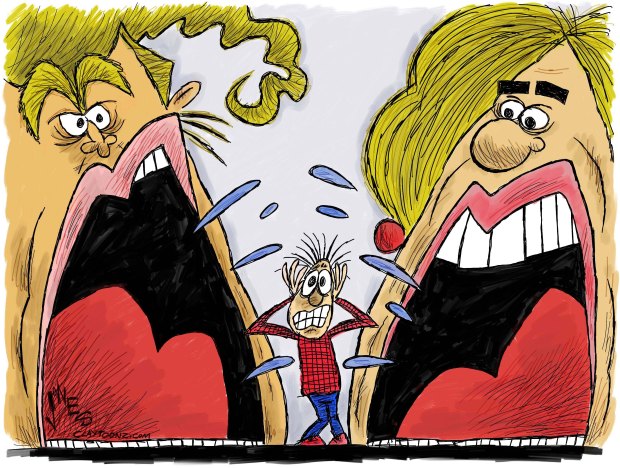 This isn’t really a cartoon. It’s an illustration for my clients. An editor for one of my subscribing newspapers asked me if I had an illustration he could use. I did not but I thought it might be a nice gesture on my part to give him and my other clients something. They can use it as a standalone, with an editorial, column, or other feature as they see fit.

It also gave me something else to do because the window for election cartoons is now closed. It’s closed for any new cartoons I can create that will be published before Wednesday. That makes me very sad.

I’ve been hitting the danger of Donald Trump for 18 months. I’ve weathered the fury of readers and editors alike. I’ve gained a few clients and I’ve lost others. I have also gained a lot of new readers and hopefully a fan or two. I can reflect on the cartoons I’ve drawn on Hillary Clinton but after Tuesday I’m going to have at least four more years of drawing Hillary. It’s also not over for Trump. He will not go away quietly into the night and his supporters aren’t going to slink back into the chuck holes they slithered out of.

Last night I had two Trump ideas but knew that even one may not ever make it into print. I had a hard time choosing. I even wrote the blog for the one I didn’t go with. It’s hilarious. You’ll never see it. A colleague told me I should take tonight off and that was a good idea. I could have gone out for a couple of drinks with a friend or stayed in and rent a movie and eat popcorn (those are kinda my only two options for a night off). But this illustration gave me something to do, plus I really enjoy coloring these things. Drawing is fun too but it’s still work. Coloring, especially in the program I’m using, is playtime.

But fighting against a potential Trump presidency and lampooning his entire disaster of a campaign that’s exposed the ugliness of our nation…yeah, that’s over. Other than the year I spent cartooning in Hawaii these past 18 months have been the most fun in my career. I hope I don’t have time to suffer from withdrawal. I feel like I’ll need a new challenge after this. Maybe I’ll finally work on that children’s book a few friends have nagged me about. It’ll be about a boy who lost his favorite toy.

Let’s not write election 2016’s obituary yet. There’s still a little life left in Campaign 2016 so let’s go then go out with a bang.

Come to this website Tuesday night and hit refresh all night long. I will be live blogging the election as results pour in, providing I survive voting earlier in the day. I haven’t come to a firm decision exactly how to do the posts, but I think I’m going to insert them all into one long blog post. I’ll be drawing very rough sketches and providing the style of snarky commentary you’ve come to love and loathe all through the evening. I’m going to remain sober but I highly recommend you have a cocktail or two. It’s going to be a very stressful night. And if you’re driving around my city, bring me a sandwich. The taco trucks won’t arrive until Wednesday morning.

There will be two more cartoons before Tuesday’s live blog and they will both be a challenge as they will be aimed at publication dates after the election. I’ll try not to be boring.