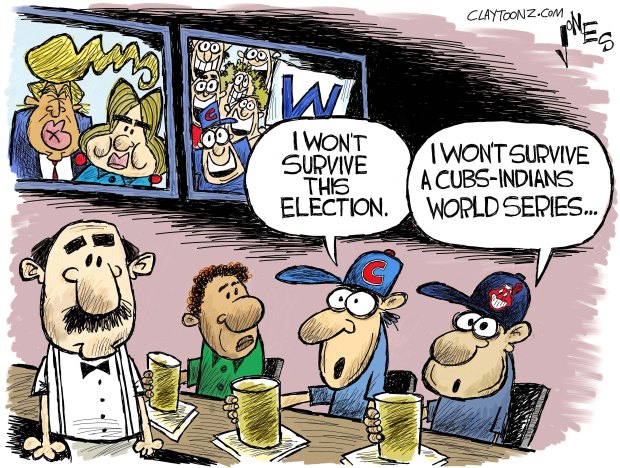 I’ve always had a soft spot for Cleveland teams. It’s a hard luck city that’s gone decades without major league championships in all three of the city’s major league sports, until the Cavaliers won the NBA title this year. It doesn’t look like the Browns will find success anytime soon.

In 1995 I was rooting for the Indians to defeat the Atlanta Braves in the World Series. It didn’t happen. The Indians haven’t been back since. In a way, Cleveland is the team I root for in the American League (when I’m paying attention). Now I have to root against them. The Cubs are my team and has been since I was a child.

I wanted to do something on two teams, who haven’t won a World Series in most of our lifetimes, playing each other in the World Series. Cleveland last won the WS in 1948. The Cubs haven’t won it since 1908. The stupid Miami Marlins who started playing in the 90’s have won it twice. Stupid fish.

A lot of people are going to go nuts over Cleveland and Chicago. I’m going to try to remain calm. Hopefully it won’t give me the heart palpitations I suffered from while watching The Walking Dead last night….or the ones to come if Trump even comes close to winning the election.