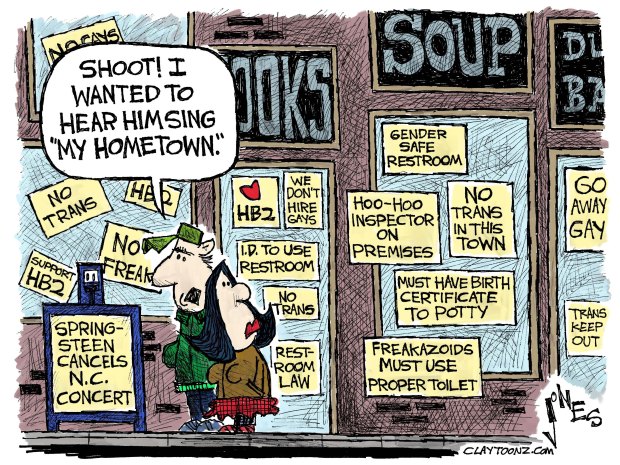 This cartoon might only work if you know the Bruce Springsteen song My Hometown. I think it’s fairly well known. Well, your kids won’t know it. It’s the final track on the Born In The USA album. If you don’t know it, or haven’t heard it in a long time, check it out. It’s a great song.

Springsteen has canceled a concert in Greensboro, North Carolina in protest of that state’s recent hate law. This is the law that specifies people must use public restrooms and locker rooms that’s in line with the gender specified on their birth certificate, as if everyone walks around with a birth certificate. The law also protects businesses from lawsuits that result from their discriminating against homosexuals, transgenders and such. It also prevents localities from passing laws protecting the same people.

North Carolina has a huge problem with freaks and they’re all Republicans.

So Springsteen is protesting and a state representative, a Republican, is calling the Boss a bully for doing so. OK. You want to pick on gay and transgenders and the person who protests is the bully? Talk about dancing in the dark (did you see what I did there?).

In other Southern hater news, Paypal has decided not to build a center in North Carolina where they would have employed 400 people. A group that wants to protests Paypal has set up a website and they’re taking donations to fight Paypal. The donations are given through….hold your breath….Paypal. Epic, epic, epic fail.